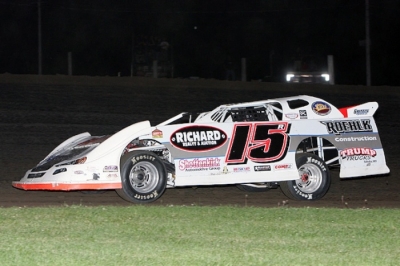 TIPTON, Iowa (June 11) — Brian Harris of Davenport, Iowa, has got to be thinking about building an addition to his trophy case.

Harris won the Deery Brothers Summer Series main event Tuesday evening at Cedar County Raceway, a $3,000 victory that marked his third straight on the IMCA-sanctioned tour. He’s one shy of the tour record established by Gary Webb of Blue Grass in 1994 and equaled by Rob Toland of Colona, Ill., a decade later. | Slideshow

The series point leader gets his opportunity to match the mark himself next Tuesday at West Liberty Raceway.

Half a dozen lead changes, just a single caution and a virtual photo-finish for second place contributed to the story line at Tipton.

Justin Kay of Wheatland, Iowa, drew the pole for the 50-lapper and led the first three laps before outside front-row starter Stephan Kammerer of Blue Grass, Iowa, eked ahead on lap four.

Setting a bristling pace, Kammerer caught up with the back of the field by lap 10. Disaster struck on the next circuit, however, as he missed his mark in the first set of turns and spun, bringing out the yellow and then restarting at the rear.

That put Kay and Denny Eckrich up front for the restart. They’d trade the lead before Eckrich settled in for a 10-lap run in first.

The seventh-starting Harris stayed locked in third until midway, when he found the fast line to the front. He stayed there to the checkers while Kay, Eckrich and Ray Guss Jr. went three-wide for the runner-up spot.

Kay finally got the edge in that battle with 10 laps left and managed to pare some of Harris’ lead in traffic, but ran out of laps to challenge. Andy Eckrich got back in the mix late and came just inches short of besting Kay in the race for second.

Denny Eckrich was fourth and Guss took fifth. Kammerer stayed fast and worked his way back into the top 10 before spinning again.