Bloomquist surges up to No. 6 in power rankings 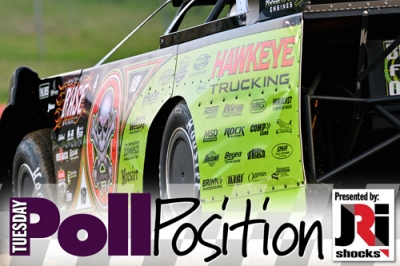 After slipping out of the top 10 in recent weeks, Scott Bloomquist’s victory Saturday at Eldora Speedway’s Dream XIX presented by Ferris Commercial Mowers spurred him back to the No. 6 spot in DirtonDirt.com’s Top 25 power rankings. Bloomquist earned one of 23 first-place votes in moving up six positions in the weekly rankings presented by JRi Shocks.

Darrell Lanigan of Union, Ky., is still No. 3 while Shane Clanton of Zebulon, Ga., slipped two spots to No. 4. Dream runner-up Dennis Erb Jr. of Carpentersville, Ill., moved up three slots to break into the top five while Don O’Neal of Martinsville, Ind., slipped out of the top five for the first time this season at No. 7.

Two drivers are new to the poll. Matt Miller of Whitehouse, Ohio, who had two preliminary victories at Eldora’s Dream weekend and ran as high as second in the 100-lapper, broke into the poll at No. 21. Ultimate Super Late Model Series points leader Casey Roberts of Toccoa, Ga., who has three series victories over the past month, entered the rankings at No. 24.

After restricting poll voting to staffers the previous two seasons, DirtonDirt.com invited more than 30 media members and drivers along with track, series and manufacturer representatives to vote in 2013’s rankings. Twenty-three submitted ballots this week. Weekly polls continue through mid-November.

Comment: After prelim victory, rallies from 28th to third at Dream XIX before coming up light at scales for first time ever. Series points: 1st (World of Outlaws). Last week's ranking: 1st (nc)

Comment: Not among the movers and shakers at Eldora, but he leaves Dream XIX with an 11th-place finish in finale. Series points: 6th (World of Outlaws). Last week's ranking: 6th (-2)

Comment: Finishes third and seventh in prelims, but surface isn’t his cup of tea for finale as he misses Dream lineup. Series points: None. Last week's ranking: 9th (-4)

Comment: Leads laps 23-64 at Dream XIX, but failure to fire on late restarts shuffles him back to sixth in 100-lapper. Series points: None. Last week’s ranking: 19th (+1)