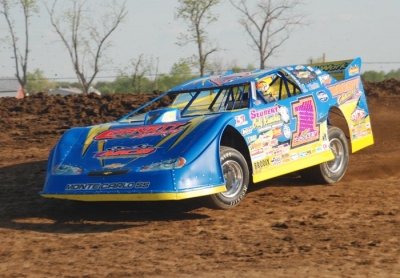 ATTICA, Ohio (May 16) — Josh Richards was pretty excited about the way he won the 50-lap World of Outlaws Late Model Series feature at Attica Raceway Park. Flashing a veteran’s poise, the fast-rising 20-year-old superstar from Shinnston, W.Va., patiently chased Chub Frank until finally grabbing the lead from his seasoned rival with a high-side pass on lap 44. He then marched away to register his second tour victory of 2008 behind the wheel of his Seubert Calf Ranches-sponsored Rocket Chassis. | Slideshow | Drown strong in finishing sixth

“That was one of the most fun races I’ve ever run,” the smiling Richards said after capturing the first-ever WoO event run at the high-banked, one-third-mile oval. “I just kept trying and trying to find a way to get by Chub, and finally I was able to get him.”

Richards, who started from the pole position but was overtaken by front-row mate Frank at the initial green flag, earned $10,150 for his eighth career series triumph. He became the second repeat winner in 10 tour events this season, joining four-time victor Billy Moyer of Batesville, Ark. The driver known as Kid Rocket also completed a clean sweep of the night’s action. Earlier in the program he set fast time in qualifying with a lap of 14.587 seconds and won his heat race.

“It was just a great night,” said Richards, whose previous WoO win this season came in the tour’s opener on Feb. 14 at Volusia Speedway Park in Barberville, Fla. “We worked hard all week — until midnight a couple nights — trying to get this car dialed in and ready to go. We’ve been experimenting the last couple weeks, and we decided to get back to just bone-stock, old stuff, and it worked out for us all night.”

Adding even more luster to his win was the fact that it came on his mother Tina’s birthday. She was not at the track, but she spoke to her son by cell phone minutes after he returned to the pit area following the checkered flag.

Frank, 46, settled for his second runner-up finish of the season, ending the race 2.113 seconds behind Richards after leading laps 1-43 in his Lester Buildings Rocket car. Darrell Lanigan of Union, Ky., placed third in his gottarace.com Rocket after holding off the late-race challenges of Moweaqua, Ill.’s Shannon Babb. It was the best WoO finish of the 2008 season for Lanigan, who has secured consecutive top-five finishes after going without one for the first eight events of the campaign.

The race centered upon Richards’s pursuit of Frank, who appeared primed for his first victory of the season after climbing back in his favorite car. Frank drove the machine he calls Old Faithful – the same 2006 Rocket he repaired after flipping it wildly on April 19 at The Dirt Track @ Lowe’s Motor Speedway in Concord, N.C. Though the feature was slowed by just three caution flags – on laps seven (for a spin by Tyler Boggs of Warsaw, Ind.), 17 (for the disabled machine of York, Pa.’s Rick Eckert) and 18 (for an off-track excursion by Jeep Van Wormer of Pinconning, Mich. — Frank wasn’t able to use the extended green-flag stretches to distance himself from Richards.

“My car felt really good the whole race,” said Richards. “I knew (Frank) couldn’t pull away, so I thought if I just maintained, there would be a chance that I could get by him.”

That opportunity came with the event winding down. After having several bids turned back by Frank, Richards was able to toss his car outside of the Pennsylvanian’s mount rounding turns three and four and he surged ahead to assume command as lap 44 was scored.

“He looked a little too tight to run the top, and my car was just balanced well,” analyzed Richards. “I don’t know if he was fading just a little to where he had to search (for a line), but when he moved down I snuck around the outside of him and got the lead.”

Frank, whose car was fitted with American Racers in battling Richards and his Hoosier tires, was gracious in defeat, hailing the ever-improving Richards. “We were probably a little softer on the left-rear tire, and I’d say it probably gave up the last eight or 10 laps,” said Frank, whose previous second-place finish in WoO action this season came Feb. 16 at Volusia. “I tried to run as high as I could in (turns) three and four without getting against the cushion, but I got too tight to drive in there and run the top like he could — and when I tried to move down, I just didn’t have enough traction.

“Josh did a very good job,” he added. “He was very patient. He didn’t do anything that would’ve wrecked either one of us. He took his shots when he thought he had ‘em, and when he couldn’t clear me on those sliders he got out of the gas and let me go. I think that was very good for him to see that patience sometimes is better than being aggressive.”

Echoing Frank’s thoughts, Richards viewed his triumph as a sign of increased maturity behind the wheel. “The last couple years I feel like I’ve gotten a lot more patient and a lot more comfortable in certain conditions that I hadn’t been before,” said Richards, the top series rookie in 2005. “It’s tough to be patient. You get close to the lead in one of these races and you just want to go for it, but I’ve learned that you just have to stay smooth.” — Kevin Kovac

Despite being unhappy with his quite eighth-place run, Steve Francis was able to take over the World of Outlaws points lead from no-show Billy Moyer, the 2005 champion who never committed to running the series in 2008. Rick Eckert, who was tied with Francis for second in the standings entering the Attica show, fell to sixth after a broken driveshaft left him with a 23rd-place finish. ... Big-block modified ace Danny Johnson edged Casey Noonan for the fourth and final transfer spot in the fourth heat, the first time he's transferred to a WoO feature through a heat race. ... After having troubles in time trials, Vic Coffey started on the tail of the 13-car third heat and rallied to get the fourth and final transfer spot, nipping John Blankenship at the finish. Coffey slid up and made a little contact with Blankenship just before they reached the checkered flag. ... Tim Fuller went to a backup car after qualifying, then had more mechanical problems in his heat race when his smoking car rolled to a stop after he started on the tail. ... Jeep Van Wormer spun twice in the first heat race. ... Rusty Schlenk slipped over the banking running second late in the first heat. ... Series director Tim Christman was pleasantly surprised by the strong car count of 52 Late Models, including Hall of Famer Donnie Moran of Dresden, Ohio, who since 2005 has been running the Lucas Oil Late Model Dirt Series until missing last weekend's event in Wheatland, Mo. ... Francis and his team scrambled to swap oil pumps before time trials. ... Clint Smith, who showed up at Attica without a moustache, slipped over the turn-two banking on his second lap of qualifying. ... Tim McCreadie dropped a driveshaft on his second qualifying lap. ... Rusty Schlenk of Jackson, Mich., is in competition in the No. 11 Lawrence Motorsports car. ... Track owner John Bores of Bellevue, Ohio, is among the entries. ... Ernie Haynes of Rising Sun, Ohio, is leading Attica's weekly UMP Late Model points. ... Also in action was the track's 410 sprints, running its usual $2,500-to-win purse. The track drew a season-high 42 sprints. ... The World of Outlaws were scheduled to follow Attica with a May 17 event at Lawrenceburg (Ind.) Speedway, but that race was cancelled because the track's reconstruction and resurfacing was incomplete. ... The WoO Late Models wrap up their weekend with a Sunday event May 18 at Lincoln (Ill.) Speedway.