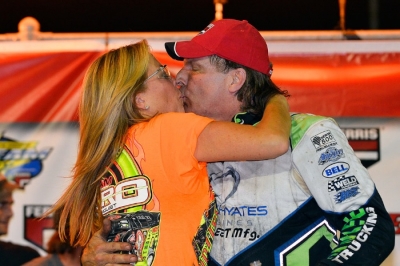 Winner Scott Bloomquist gets a kiss from wife Kristina. (thesportswire.net)

Simultaneously ending a rare five-year absence from victory lane at Tony Stewart’s famed high-banked, half-mile oval and busting out of an early-season slump, Bloomquist methodically marched forward to take the lead from Jimmy Mars of Menomonie, Wis., on lap 65 and dominated the remainder of the distance. The 49-year-old easily handled two late-race restarts to claim the UMP DIRTcar-sanctioned event’s $100,000 top prize for a record sixth time. | Complete Dream XIX coverage

“It’s been kind of a rough spring,” Bloomquist said. “We’ve not had the wins that we are used to or accustomed to. We’ve had a lot of bad luck, just a lot of crazy things happening to us. It’s been bad, but I told everybody (entering the Dream), ‘This is gonna turn around. It’s gonna turn around quick and big. We’re gonna go win this hundred-grand. That will be the end of this bad luck streak.’

“Everybody was just kind of looking at me like, What are you doing? I said, ‘Don’t worry — we can do it.’”

Indeed he did — and in no-doubt-it fashion. No one was able to threaten Bloomquist once he completed his advance from the sixth starting spot to the lead in Dirt Late Model racing’s richest race.

Dennis Erb Jr. of Carpentersville, Ill., chased Bloomquist under the checkered flag, finishing 1.527 seconds back in second place. But Erb, who started 17th, didn’t even crack the top five until lap 91 — and after vaulting from fifth to second on a restart that circuit, he spent the final circuits fighting to maintain the runner-up spot rather than attempting to challenge Bloomquist.

Brian Birkhofer of Muscatine, Iowa, who won last September’s World 100 at Eldora, placed third, Dale McDowell of Chickamauga, Ga., was fourth and 21 st-starter Jimmy Owens of Newport, Tenn., took advantage of restarts on laps 91 and 98 to sneak up the rundown and complete the top five.

Josh Richards of Shinnston, W.Va., crossed the finish line in third place after climbing as high as second from the 28th starting spot, but the fast-time provisional starter was disqualified and placed last in the rundown when his Rocket Chassis house car weighed in 32 pounds below the 2,300-pound minimum at the postrace weigh-in. He attributed the inspection failure to his forgetting to bolt a lead weight to the car during his team’s scramble to repair damage sustained in a heat-race tangle.

Bloomquist, who made his race-record 17th career Dream start, pointed to Friday night’s preliminary feature as a key to his convincing triumph. He started at the rear of the 25-lap race, using it as a test session to tune his self-built Team Zero machine.

“Racing ain’t getting any easier,” said Bloomquist, whose previous Dream victories came in 1995, 2002, ’04, ’06 and ’08. “The competition is getting tougher. You gotta just never quit looking and searching.

“That’s one thing that last night did for us — instead of getting out there and racing hard, I came in and I tried a couple of things. When the cautions came out I’d try something drastic just to give me some direction to go. We hardly ever get that (type of opportunity) here.”

Once Bloomquist realized at the start of the Dream headliner that his car was working so well that he “could do no wrong with it,” he settled into a familiar pattern. He demonstrated the patience that has brought him so much success at Eldora, watching from a comfortable distance as 17-year-old Tyler Reddick of Corning, Calif., jumped off the pole position to lead laps 1-22 before breaking a driveshaft and then Mars inherited the top spot and set the pace.

“Early I let them get away from me,” said Bloomquist, who ran fifth for much of the race’s first half. “I just did not want to spin the tires. I knew I was running a fast enough pace not to get passed, so I just sat there, waiting, letting heat build in my tires, and trying not rip all the edges off by trying to go too fast to soon.

“That’s definitely what made it feel like the old days (at Eldora). We used to do that a lot — just wait for the last 30 (laps), and everybody would already have all the edges gone (off their tires) and burnt their stuff up and then everybody would go, ‘Where did he find a half-second?’

“Well, I just wasn’t pushing yet,” he added, “and I would have enough edges left to push it at the end.”

Bloomquist passed Tim Fuller of Watertown, N.Y., for third on lap 47 and Duane Chamberlain of Richmond, Ind., for second on lap 53. He then ran down Mars, who had inherited the lead when Reddick departed on lap 22, and sailed in front for good on lap 65.

Within 10 laps Bloomquist had built more than a straightaway lead. He stretched his edge to nearly a half-lap at one point and was still in front by over five seconds on lap 91 when a caution flag flew for Matt Miller of Whitehouse, Ohio, a preliminary feature winner on both Thursday and Friday whose late bid to run down Bloomquist ended five laps after he passed Mars for second place because of a broken driveshaft.

Bloomquist had to deal with double-file restarts on lap 91 and 98, but the slowdowns did little more than prolong the race.

“You hate to see those cautions at the end like that, but the car felt so good,” said Bloomquist, emerged triumph one year after finishing a career-worst 21st in the Dream. “The car just took off (on the restarts). I could run any line around this racetrack.”

Erb, 40, was satisfied with earning a $20,000 runner-up check behind the wheel of his Team Zero by Bloomquist car. It was his career-best finish in four Dream starts, topping his fifth-place run in 2012.

“We just kept plugging away and we got up there to the front,” said Erb, who dueled for second with Richards for the final 10 laps. “We couldn’t stay with Scott but we’ll take second.”

Mars, who led laps 23-64, was still in second on lap 91 but got shuffled back to sixth in the official order of finish; Chris Madden of Gray Court, S.C., placed seventh after climbing as high as fourth; Steve Francis of Ashland, Ky., finished eighth after changing engines following heat action; Fuller faded to ninth in his second career Dream start; and Terry Phillips of Springfield, Mo., finished one lap down in 10th.

Eighty-four cars entered the Dream XIX by Ferris, which featured an expanded three-day format that for the first time included complete racing programs with twin 25-lap features on Thursday and Friday. Saturday night’s heat-race lineups were determined using each driver’s best time-trial lap from qualifying on Thursday and Friday nights.

Davenport earned $1,000 for registering the fastest overall lap of the weekend with his 15.386-second clocking on Friday night. He beat the Thursday-night circuit turned in by defending Dream champion Shane Clanton of Zebulon, Ga., by a mere .001 of a second.

Lanigan spun into the turn-four wall while attempting to pass Mars for the lead on the opening lap of the fourth heat and was hit hard by Frank Heckenast Jr. of Frankfort, Ill. Richards was also involved, but he was able to continue racing despite the significant right-side damage his car sustained.

O’Neal, meanwhile, limped into the pit area on lap eight of the fifth heat after slapping the wall between turns one and two. His MasterSbilt house car had its right-side bodywork ripped away.

A red flag was needed shortly after O’Neal’s crash so safety crews could tend to Jacob Hawkins of Fairmont, W.Va., who needed medical attention after driving his St. Henry Nite Club car to his team’s trailer in the pit area. Hawkins was reportedly struck in his helmet by an object while racing and was transported to a local hospital for treatment of possible facial injuries.