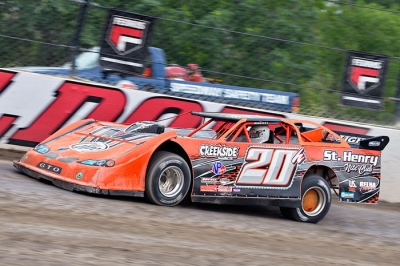 In the 25-lapper won by Dennis Erb Jr., Hawkins rallied from his 17th starting spot to sixth, proving that his St. Henry Nite Club-sponsored machine worthy on a weekend with more than 80 racers on hand at the legendary Tony Stewart-owned oval.

“I caught a couple of breaks where I got to parts of the field where they were down on the bottom, and the top was where I needed to be,” Hawkins said. “That made it easier at time, but then I’d get to where guys were running two-wide, and I’d just have to take my time and let 'em get single-file and try and slide 'em one lap at a time, just picking 'em off, just trying to keep my nose clean at the same time.”

It’s a good thing Hawkins and his No. 20h has been able to pass cars, because he’ll have to do it again during Saturday’s heat races in starting from the fifth row. Qualifying has been the curse of the team.

“The car’s felt this good all weekend. It’s just we lack a little bit of horsepower for qualifying, and it just puts us behind the 8-ball in the heat races,” said Hawkins, who finished second two weeks ago at Eldora in the ALMS-sanctioned Johnny Appleseed Classic. “But you know, hopefully we can do the same thing tomorrow, and if I start in that same spot (in the feature), 100 laps, I think we can get up there and mix it up with these guys. I really think we’ve got a car to do it.

“It’s going to be tough, but the car’s definitely good enough to get in there. We just need to catch a couple of breaks.”

“I just don’t have the motor to get me down the straightaway. I’m out of speed by the time I get out of (turn) four. I’m running a 415 (c.i. engine). This is a motor that we’ve just rebuilt this year. My brother (Jared) started with it five, six years ago. It’s just not going to outqualify a 454 big-bore and all that stuff, but you know, it’s definitely good enough as soon as that track slickens off and we get out momentum going. It’s as good as anything then.

“We just lack that little bit to get us to where we need to start, but tomorrow, laps are longer, everything takes longer, and we showed tonight that the car’s capable of passing cars, so hopefully I can just get the job done.”

In Friday’s opening 25-lapper, Matt Miller and Steve Casebolt made contact at the end of the frontstretch battling for the lead on an early restart. It helped Miller take command and race to a $5,000 victory and his second feature win of the weekend.

Regarding the contact, Miller and Casebolt agreed Miller probably would’ve won either way. And they agreed they both wanted to check out the video. But they didn’t quite agree about blame or if anyone made a mistake.

“I guess he felt like I crowded him. I don’t know. I thought we had that restart and obviously you’ve gotta get what you got. I guess I’ll have to look at the video,” Miller said. “It was not intentional by no means. It’s just I was trying to get my entry higher, and if I crowded him, I didn’t mean it by no means. ...

“I think it was just a matter of time I got by him anyways. You know, it’s Eldora. ... I’ll apologize later. It was not intentional. I would never race like that, and people who know me know I don’t race like that.”

Casebolt showed his displeasure during the next caution period by revving up alongside Miller’s car, then threw a retaliatory but ultimately unsuccessful slide job at Miller on the next restart.

“I’d like to see a replay of it. It sure felt like (Miller’s fault) from my vantage point. No, he didn’t crowd me. It seemed like to me he just ran right into me,” Casebolt said. “Maybe I didn’t see it right from where I was sitting, but it sure seemed like it to me. You can see the damage — the car’s crushed in all the way from behind the left-rear tire up to the left-front tire. We definitely hit and I thought he hit me. I’d like to see a replay.

“From the way it felt like from where I was at, he just drove right into the left side, knocked me up out of the way and broke me momentum, and he drove on,” he added. “I knew that slide job I pulled wasn’t going to stick, but hey, I’ll slide up in front of him I guess. I like Matt and I like racing with him. I don’t know what that was all about.”

Two-time Dream winner and polesitter Billy Moyer of Batesville, Ark., jumped into the early lead in the nightcap, but when fellow front-row starter Mason Zeigler slapped the wall on the second lap, it triggered a caution and restart that would prove to be Moyer’s undoing.

Officials ruled that Moyer, who started alongside Dustin Neat in a double-file restart, fired too soon, docking him two positions and putting him in the second row for the restart.

That put Chris Madden on the front row, and he led most of the way before Dennis Erb Jr. outdueled him in the final laps for the $5,000 victory. Erb took the checkers ahead of Madden and Moyer, who caught the frontrunners late but didn’t have time to regain control of a race he led for a single lap.

Moyer disputed the call on the jumped start.

“I started rolling a little faster over there (in turn three), but I far from tried to do a jump-start and back on the mat for the start. I mean, I just picked my tempo up a little bit. I wasn’t even close to getting ready to start the race,” he said. “ “The tower definitely took it away from me I feel like.

“If we’d have been out front and stayed in the clean track, you know it was really good there at the end there, coming back to 'em. For some reason it just took us a little longer to get going tire-wise than these other guys, it seemed like, but overall it was good, I guess. We’ve got a direction for tomorrow now.”