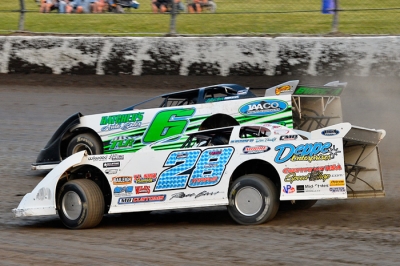 Jimmy Mars (28) heads for a heat race victory at Eldora on Thursday. (thesportswire.net)

ROSSBURG, Ohio (June 7) — Former Dream winner Jimmy Mars of Menomonie, Wis., led every lap of his heat race to earn the pole position for a 25-lap feature Thursday on the first night of Eldora Speedway’s Dream XIX weekend, but he never got a chance to mix it up with the frontrunners in the wild race won by Josh Richards.

“It didn’t feel right from the beginning,” Mars said of his No. 28 MB Customs chassis. Could it be a flat tire? He’s pulled in before thinking that was the case when it wasn’t, so Mars stuck with it for a while before he was convinced his right-rear was losing air. | Complete Dream XIX coverage

Indeed, the tire was going flat, robbing Mars of a chance to get his car dialed in heading to Saturday’s $100,000-to-win finale.

“I think it was doing down before we got on the track,” said crew chief and brother Chris Mars.

Over the years, subpar time-trialing has hurt the team at Eldora, and Mars ran into that again Thursday as he qualified 40th best among the 84-car field.

“The biggest thing is I need to qualify better,” said Mars, who gets another chance Friday. “We’ll try again.”

Hawkins is hot (too hot)

Jacob Hawkins of Fairmont, W.Va., appeared to be the fastest of the three St. Henry Nite Club cars in action Thursday at Eldora, but just when he had a chance to break into the top five of his 25-lap feature, a brush with the wall and an overheating engine forced him out.

Hawkins started the night racing lower on the track in his heat race, but when he switched to the tricky extreme outside groove, he flew into contention in the eight-lapper, finishing third. “I knew I needed to get my motor going,” he said.

Starting 10th in his feature, Hawkins crept within a few spots of the top five. He tried to take a spot from Jeep Van Wormer late in the race, but the battle ended with Hawkins getting into the turn-two wall. With his engine temperature above 230 degrees, Hawkins slowed to draw a lap-23 caution and headed for the pits so the crew could try to cool it down amid a plume of steam.

Because the engine also ran hot in his heat race, the team made a radiator switch and hope the engine runs OK — and cooler — in Friday’s action.

“I feel really good about the car,” Hawkins said. “if this motor stays together.”

Dustin Neat of Dunnville, Ky., has been a long-time Bluegrass State racer and has had success at Eldora, but his 2013 season consisted of zero laps until Thursday’s practice session.

“I've just wanted to spend more time with the kids and their sporting events,” said Neat, who has a 6-year-old daughter Kennedy and a 3-year-old boy Korbin.

But while his usual No. 25 Longhorn Chassis has been mothballed so far in 2013, Neat supplied his 417 c.i. motor to the Campbellsville, Ky.-based car of Gene Hatcher (grandfather), Danny Hatcher (father) and Daniel Hatcher (son), an orange Barry Wright Race car carrying the No. 6.

Neat managed a fourth-place transfer spot in his Thursday heat race despite a transmission stuck in high gear that cause a severe vibration in the final laps. The team swapped transmissions before the main event, using the 25-lapper for Neat to get a better feel for the car before he retired.

During Friday’s hot laps at Eldora, Earl Pearson Jr., who already had problems with a skipping powerplant, found more trouble. He hit the backstretch wall, and then the motor let go altogether.

“It’s been one of those kind of weekends,” the Jacksonville, Fla., driver said. And then, if you can believe it, the news got worse for Pearson.
Just after the team unloaded a backup Longhorn Chassis — “This one is brand new from top to bottom,” Pearson said — UMP DIRTcar director Sam Driggers told Pearson that he wouldn’t be allowed to switch to a backup car.

Eldora’s rule only allow drivers to switch to a backup car if they sustain damage in an accident that proves unfixable, not because of engine problems. And while Pearson’s car indeed suffered some damage in Friday’s hot laps, it was deemed repairable.

“Then I’m done for the weekend,” Pearson said to Driggers, pleading his case. Team engineer Kevin Rumley suggested to Driggers — partly tongue in cheek — that the car was indeed unfixable, but apparently the decision had been made.

While he’s definitely out of Friday’s action because there’s no time to make a quick engine swap with the multicar time-trial format, Pearson can either load up and bag the weekend, or the team can drop a new powerplant in his original car and run a Saturday heat race. However, Pearson was just 38th fastest in Thursday’s time trials and he’ll likely drop significantly further after Friday’s time trials.

Immediately after getting the news from Driggers, Pearson wasn’t sure what he wanted to do. “I’ll just have to see what kind of damage we've got and go from there,” he said.

Either way, Pearson wasn’t crazy about the backup-car rules on a weekend with so many racing laps that leave drivers dependent on a single car. “We all come here with another car and can’t use it,” he said.

Drivers who were allowed to go to backup cars for Friday were John Blankenship, who was involved in a first-lap wreck in a Thursday feature, and Craig Smith, who damaged his No. 8 in a Thursday heat race.

Richards goes all out

As a half-dozen crew members scrambled to make body repairs on the right-rear corner of the Rocket Chassis house car, crew member Jimmy Frey said the team didn’t mind one bit fixing the car for Josh Richards after he hit the wall on his second qualifying lap Friday.

That Richards isn’t “lollypoppin’ around out there” gives the team a boost, Frey said. “At least when you do this, you know they’re trying.”

And the damage wasn’t too bad — mostly cosmetic, Richards observed — and should allow him to compete in the rest of the Friday’s program while gunning for his second feature victory of the weekend. A last-lap pass gave him a Thursday’s victory.

“It’s not too much for this bunch; we’ve got a small army,” Frey said. “If this is the worst it gets this weekend, we’re in good shape.”

“I think Jonathan got whatever was left out there,” Richards said of a track that changed during the time-trial session. “The track flipped the switch there real quick.”

Richards was letting it all hang out for his final qualifying lap in the Dream’s new format that gives drivers four time-trial laps between Thursday and Friday’s action. “At this place,” he said, “you’ve gotta go for it.”

Eldora Speedway can be an intimidating place for drivers who don’t have much experience on the high banks of the half-mile oval, but Mason Zeigler has gotten pretty comfortable at the Tony Stewart-owned track.

“It seems anywhere we go where it’s high speed and on the gas, we’re pretty good,” said Zeigler, the 20-year-old Chalk Hill, Pa., driver who also had success during Florida Speedweeks at Volusia Speedway Park.

In his first visit to Eldora last fall, he set fast time the UMP Nationals and finished 10th in the main event. He’s also been in the mix during the three-day Dream XIX weekend, winning a heat race Friday to earn a front-row starting spot in one of the twin features.

His carburetor was sputtering in Friday’s time trials, but engine builder Bill Schlieper came past to tune it up, and his No. 25z ran “10 times better" in outrunning Chris Madden in his heat. Zeigler did have a scrape with the wall, damaging the right-rear corner of his spoiler when the Eldora concrete bit him ever gently.

“I wanted to give (Madden) room,” Zeigler said as crew chief Austin Hargrove repaired the damage, "but he wasn’t giving me any room.”

Jon Henry’s third overall qualifying lap during Dream XIX weekend has been a blessing and a curse. A blessing because it means he has one of the fastest cars, a curse because he’s been leery to put the No. 15 on the track.

Henry has been reluctant to go all out in Thursday or Friday’s preliminary racing because he has a single Rocket Chassis and a serious wreck could end his weekend. He tagged the tail of a heat Thursday to get some practice laps, and did the same Friday in a consolation race.

But he wonders if he’s making the right decision in sitting out instead of throwing caution to the wind and trying to build momentum for Saturday, when there’s $100,000 on the line in the 100-lap finale.

“I ask myself, 'Am I doing the right thing,' ” Henry said after skipping Friday’s heat race. And he wonders if he’ll be ready to go when it’s time to race. “All I’ve been doing is watching, and now I’ve gotta get up on the wheel.”

Henry’s decision over whether to race or not isn’t over. If, in the first two heat races on Saturday, Jonathan Davenport or Shane Clanton finish among the top three to transfer to the feature, Henry will be assured a 10th-row starting spot in the feature (and the $2,000 starting money) via fast-qualifier provisional.

So he could, once again, opt to skip Saturday’s third heat race, where he’ll start sixth, and simply wait to run the 100-lap feature. That decision won’t come until tomorrow, but he pondered what he’ll do Friday.