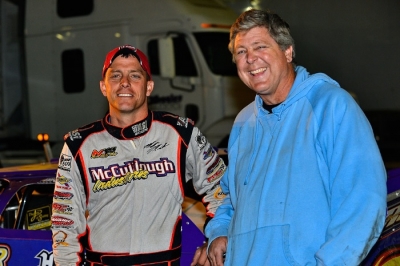 ROSSBURG, Ohio (June 7) — Because stock cars go round and round the racetrack, it’s only natural that a racer’s career come full circle. And so it is for 41-year-old dirt racer Matt Miller, who connected with fellow Whitehouse, Ohio, resident Rick Delong at the beginning of his career — and now again 20 years later. | Complete Dream XIX coverage

Their second pairing that began last season was rewarded on Thursday with their biggest accomplishment yet as Miller steered Delong’s No. 3 Rocket Chassis to a preliminary feature victory on the first night of Eldora Speedway’s newly-expanded Dream XIX.

Thursday night’s laps (25) and purse ($2,500) were modest at the legendary half-mile oval, but outrunning Jimmy Owens of Newport, Tenn., and scores of the best racers in the business established Miller among the favorites for Saturday night’s $100,000 prize, the richest in Dirt Late Model racing.

“This is the one place I feel like we have unfinished goals, me personally,” said Miller, whose biggest career victory came in 2005’s Dream. “Nights like tonight give me hope that on the right night with the right car and the right situation, maybe we can get 'er done.”

More Miller-Delong success would be fitting for the pair who first connected in 1990 when Miller’s father asked Delong to help him buy some racing equipment.

“His dad came over, and he stopped over a few times and we talked about it,” the 49-year-old Delong recalled. “I knew some guys who were selling out a whole race team, and put 'em together. We went over and met with the guy and he bought the equipment off the guy, and actually (Matt’s) dad started racing first. He raced a couple of times and then the put Matt in the car — and they really came alive and stuff.”

“My first experience was my dad brought home this pile of crap in as semi, took it over to Delong’s, and I had no idea what in the hell it was,” he said. “We went through tryouts. My dad and my brother, and they failed, and I went out and did all right — and here we are today.”

Well, Miller jumped ahead a little bit. While Delong continued to field his own team locally for 20 more years, Miller’s career trajectory took him to the top of the sport with high-profile Florida Speedweek victories, national touring victories and of course his $100,000 payday at Eldora eight seasons ago. But it became clear a few years back that age, family commitments and the grind of professional racing had Miller thinking about life after racing.

With McCullough Motorsports shutting down operations in 2011, Miller stayed connected to the industry with a job as a sale representative for Michigan-based Corrigan Oil and Sunoco Race Fuels. It was possible that his driving career was over.

But it was in 2012 when Delong, plagued by repeated disc problems in his neck, was scaling back his driving.

“I was having problems lifting my arm up on the left side, and couldn’t get it above my shoulders,” he said. “My wife, we thought it would be better off if I kind of got out of the seat and not take the risk of hurting myself anymore.”

And Delong knew just the guy to replace him in the No. 3, a solid entry at Ohio racetracks for many seasons. Miller climbed in the car last season and the team’s extensive success included three Sunoco American Late Model Series victories, one at Eldora.

“It’s been fun with Matt ... I know he was looking to have fun again,” said Delong, a mechanic for a construction company. “Everything gets too serious, sometimes, and we don’t have fun anymore. We’re not full-time racers or nothing. We’re just out wanting to have some fun — and be successful at it, too.”

It didn’t take Miller long to figure out it was a perfect situation with what he called a “great group of guys” helping him during another phase of his driving career.

“When you’re 18 years old, you don’t know what the hell you’re doing — you don’t know what the hell you’re doing when you’re 41,” Miller joked. “At least now, it’s been fun. I tell you what, I’ve had more fun the last two years than I’ve had in a long time. When you’re doing it for a living, (there’s) a lot more pressure when the paycheck depends on how you do. So you go out there, and if we ran good like tonight, you feel great. And if you run like crap, you don’t worry about it as much — I shouldn’t say that, we’re competitive — but it’s fun.”

The team recently got a new Rocket Chassis and Delong “worked on the car about 24-7 the last two weeks,” said Miller, adding that huddling with Rocket co-founder Mark Richards help whip the car into shape.

“The reason we got this new car is we want to be able to pick and choose some bigger races here and there. We knew we had to get a little more competitive with that we’ve got,” Miller said. “That’s why Mark Richards and I worked together a little bit, and he agreed to help us out and get pointed in the right direction. They’ve got a good race car. It’s been a little hit and miss, but I knew we won at a couple of other tracks. The car, it’s been good. When we get it right, it’s really good. So I’m optimistic about the future.”

Delong was an accomplished driver himself, but he says he finds himself in awe of Miller’s abilities.

“He’s very talented,” Delong said. “I can’t believe — watching him more because he’s in my car now — just the things that he does. He’s just amazes me.”

While Delong was walking back from the technical inspection area Thursday night, heading for the team’s infield pit area, a crew member of another Ohio team shook his hand with congratulations.

The crew member thought for a moment, then called back over his right shoulder: “No, no it’s not,” he said.