Davenport gets boost from prelim performance 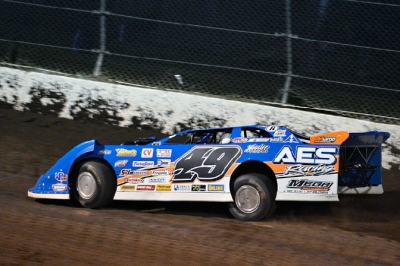 ROSSBURG, Ohio (June 6) — In most cases, Jonathan Davenport would be extremely disappointed to finish fifth in a race he felt he should have won.

But after leading 10 laps in the first of two twin 25-lap Dream XIX preliminary features Thursday night at Eldora Speedway only to fade to fifth on a late restart, Davenport was anything but disappointed with his performance. | Complete Dream XIX coverage

That’s because Davenport has the big picture in mind. And on a weekend where a $100,000 Dream victory is up for grabs, Davenport was quick to focus on the positives from his performance in Thursday night’s $2,500-to-win tuneup event.

“You always want to win, but the important thing is we’re inching up on the setup,” said Davenport, who roared from fourth to first early in Thursday’s feature and swapped the lead with Steve Francis of Ashland, Ky., five times before trouble negotiating traffic caused him to fade in the closing laps. “I ain’t got that many laps here, especially in race condition and especially with a car like we’ve got now. We’ve got a good piece; we’ve just gotta get better in traffic.”

Davenport, 29, of Blairsville, Ga., appeared to have the car to beat through the first half of the race, opening nearly a straightaway advantage as he powered around the extreme high side of Eldora’s high-speed, half-mile oval.

But the fastest car doesn’t always win. And such was the case for Davenport, who struggled mightily in negotiating lapped traffic. Any time he was forced to move his No. 49 AES Racing Barry Wright machine from the top groove to overtake a lapped car, Davenport slowed considerably and was no match for Francis or eventual race winner Josh Richards of Shinnston, W.Va.

Davenport slipped back to third by the time the race’s final caution waved with two laps remaining, and being forced to restart on the bottom lane, he dropped two more spots in the final dash to the finish.

“I was just married to that cushion and I couldn’t rotate around the bottom like I needed to,” said Davenport, whose best major-event performance at Eldora was an 11th-place finish in the 2010 Dream. “I guess it was just inexperience here. I was afraid to tear someone else’s car up and mine up. I don’t really know, at those speeds here how close I need to be to somebody to slide ‘em.”

The good news for Davenport, is he learned plenty that will help him for the remainder of the weekend at Eldora, which features another set of twin features Friday night and Dream XIX heat races, consolation races and 100-lap finale on Saturday.

The multitude of racing is new for the crown jewel event after a format change that added Thursday and Friday’s two complete programs to the Eldora’s traditional slate of qualifying on Friday and heats, consys and features on Saturday.

That change has proven to be a major benefit for Davenport, who’s happy to finally get some much-needed race-time experience at Eldora.

“Before, I felt like I was a session behind every time we went out on the racetrack,” Davenport said. “Now I feel like I’m caught up with my changes, and I don’t have to make such drastic ones to try to keep up with these guys.”

With all that he learn Thursday, Davenport is hoping to continue to improve in Friday’s action with eye already toward Saturday’s Dream XIX main event. While he knows there’s a lot that could happen before the final checkered flag waves Saturday night, Davenport is confident he has a car capable of challenging for his the victory.

“I learned a lot about passing if traffic tonight that I can carry on to tomorrow and maybe I can get a little better for Saturday,” Davenport said. “As long as I do my job, the car’s good enough to win the race. I just got to stay calm and pick the right lines and not do anything stupid. If I do that, I think we’ll be close in the 100-lapper.”