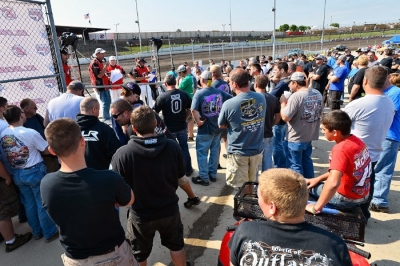 ROSSBURG, Ohio (June 6) — Dream XIX’s expanded format with three days of racing has been a popular topic of conversation throughout the Eldora Speedway pit area Thursday.

Many drivers were worried what would happen if they were to crash their primary car during tonight or Friday’s action and whether or not they would be allowed to keep their qualifying time and resulting starting spot in Saturday’s Dream heat races if they were forced to go to a backup car. | Complete Dream XIX coverage

The answer to that question was uncertain at Thursday’s drivers’ meeting, but director of operations Larry Boos later told drivers they could keep their time for Saturday’s heat lineups in the event of an accident.

Before learning of that decision, some drivers said they might consider time-trialing but skipping Thursday and Friday’s preliminary racing, which doesn't affect Saturday’s heat race lineups.

“I’m here to make the Dream, and I just don’t know if I would want to risk it if I have a good (qualifying) time,” Billy Moyer Jr. said. “It would be a tough decision for sure. I guess I just hope I’m in that situation.”

Morgan Bagley and crew chief Randall Edwards weren’t sure what decision they would make if they posted a solid qualifying time. Bagley said he would likely want to race just to get more experience at Eldora, but Edwards was thinking otherwise.

Steve Francis said it would be difficult to turn down the rare chance to get extra laps around Eldora.

Gregg Satterlee of Rochester Mills, Pa., is beginning his three-day weekend at Eldora after a busy but successful stretch of five races in six nights on the Appalachian Mountain Speedweek presented by Harbaugh Amusement.

Satterlee, who along with his team made the nearly nine-hour drive to Eldora following last night’s Speedweek finale at Lincoln Speedway in Abbottstown, Pa., enters the Dream after picking up his first Appalachian Mountain Speedway championship with four top-three finishes, including a victory Monday at Roaring Knob Motorsports Complex in Markleysburg, Pa.

“We’re a little tired from the drive over, but we’re all happy to be here,” said Satterlee, who has four previous appearances at Eldora. “We were already kinda planning on coming, but we had a pretty good week so we figured we should come give it a try.”

Satterlee, who has two World 100 main event starts in his four Eldora appearances, hopes his success on the Speedweek tour carries over to this weekend’s event.

“I’ve never been particularly good here, but we had a pretty good car all week,” Satterlee said. “We had a car capable of winning pretty much every night, so hopefully we can keep that going and make the show and get a good run.”

Bobby Pierce’s first competitive laps around Eldora Speedway did not go as well as he had hoped. Making his Eldora debut at the Dream, the 16-year-old Pierce of Oakwood, Ill., slammed the wall in turns three and four during his qualifying run Thursday night, causing heavy damage to the rear of his No. 32 Bob Pierce Race Car.

Pierce learned the hard way just how thin the margin between fast and wrecked can be at Eldora. “That’s what you’re supposed to do here; go in there wide open,” Piece said. “I guess you either end up with a good lap of end up in the wall.”

With two more nights of racing left at Eldora, Pierce remains optimistic that he can still salvage a decent weekend.

“Hopefully we can turn things around and still make the show Saturday,” Pierce said. “We’re definitely disappointed, but we’ll get it back together.”

A bit of trouble for Babb, too

It wasn’t just the Eldora first-timers having trouble negotiating Eldora’s tricky surface during Thursday’s time trials. Longtime Eldora competitor Shannon Babb of Moweaqua, Ill., also found himself up against the wall in turns three and four in a fashion similar to Bobby Pierce on his second qualifying lap.

But unlike Pierce, Babb, who posted the fourth-fastest time on his first lap, was able to avoid any serious damage.

“That’s how it is here,” Babb said. “You’re just on the edge, so that’s gonna happen. You just gotta be ready for it make sure it’s not too bad when you do get into it.”

Fast qualifier Shane Clanton decided to skip the remainder of Thursday's action and save his race car for the rest of the weekend. Clanton, who’s looking to become the first back-to-back Dream winner, had considered only qualifying tonight when he realized he had a fast race car in hot laps, but the four-car inversion helped make up his mind.

“If I had drew a two, I probably would’ve raced. That way, I could’ve dictated turn one,” Clanton said. “Our car’s way too good and we’ve got way too much at stake to wreck it tonight.”

Clanton is more than confident he’s making the right decision. Winning at Eldora, he said, requires a two-part equation. And he already has half the equation solved.

“It takes a lot of luck and a good race car to win here,” Clanton said. “We’ve got a fast, fast race car, so now all we need is some luck.”

Nerves get a break

Count Jon Henry among the drivers who approve of Eldora Speedway’s new format for the Dream and World 100.

While plenty of drivers have applauded the track’s addition of preliminary races on Thursday and Friday that allow for more track time at the tricky half-mile oval, Henry is a big fan of the change to give drivers two qualifying laps in both qualifying rounds as opposed to having just one lap under the old format.

“I went out there and I could actually breath,” said Henry, who posted the second-fast time Thursday. “Usually, you’re holding your breath on pins and needles. With two laps, I was able to go out there and relax. That really makes things a lot easier without all that pressure.

“When you have two laps, that first lap you can feel of the car and see where it’s at. Then if you know you got a decent time, you can really go after on your second lap.”

Henry’s fast lap puts him in a good position for the rest of the weekend. While the second round of qualifying on Friday could change all that if his time is beat, Henry is confident his time will stand as second-best, guaranteeing him a starting spot in Saturday’s 100-lap main event.

With that in mind, Henry decided to take it easy in Thursday’s heat race, starting on the tail and using it as an impromptu hot-lap session.

“With all the racing they’ll do tonight, I really don’t see the track being faster tomorrow,” said Henry, whose family-owned race team doesn’t have a backup car. “If these times stand, that means I’m locked in. It’s just not worth it to get out there tonight and risk wrecking our only car.

“I want to race for the fans. But I’ve gotta think about the big picture.”

Steve Shaver’s night is over after his hard heat race wreck. Without a backup car in the trailer, his whole weekend might be over as well. His crew is working to fix heavy damage to his No. 6 Longhorn Chassis, but Shaver said he was unsure if sufficient repairs could be made at the track. ... Don O’Neal called it a night after qualifying, saying his team wants to adjust on the frontend of his MasterSbilt house car. “It just wasn’t quite where we wanted it, so we didn’t see no reason to run it anymore tonight,” said O’Neal, who’s driving an all-yellow No. 71 machine that he won the Dream with in 2011. ... Gregg Satterlee also loaded up after qualifying and will try again Friday night. His scrape with the wall in time trials didn’t cause much damage to his car, but he didn’t want to risk another accident in starting from the back of a heat race. ... Bobby Pierce’s bad luck continued into his heat race. He pulled to the pits with a vibration from a bent right-front wheel during his heat. His crew swapped the tire and wheel, only to discover that the spare wheel was also bent. After finding a wheel he’s certain isn’t bent, Pierce plans to run his consolation race to make sure it’s not something else causing the vibration.