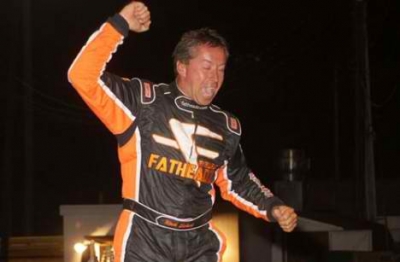 ABBOTTSTOWN, Pa. (June 5) — Gregg Satterlee was on his way to closing out his first Appalachian Mountain Speedweek presented by Harbaugh Amusement championship with a victory in Wednesday’s series finale at Lincoln Speedway. Rick Eckert had other plans. | Slideshow | Video

Advancing from the eighth starting spot, Eckert of York, Pa., overtook Satterlee of Rochester Mills, Pa., with four laps remaining in Wednesday’s 40-lap event at Lincoln and led the final laps in claiming his second straight victory on the Pennsylvania-based miniseries.

Eckert, the 2010 series champion, earned $7,000 in becoming the first repeat winner on this year’s tour, which was shortened from six to five races thanks to a rainout of Sunday’s event at Winchester (Va.) Speedway.

Satterlee, who led 35 laps after starting from the front row, was forced to settle for second in Wednesday’s race, but claimed his first-ever Appalachian Mountain Speedweek championship in the process.

Vic Coffey of Caledonia, N.Y., entered the night just two points behind Satterlee in the series points standings, but had to settled for second in the championship chase after finishing third in the race behind Eckert and Satterlee.

Dan Stone of Thompson, Pa., claimed fourth after advancing from the 19th starting spot, while Davey Johnson of Latrobe, Pa., who briefly took the lead from Satterlee on lap 26, rounded out the top five in a race slowed by two cautions.

Eckert, who drove Paul Crowl's No. 7 Rocket in only making three Speedweeks starts this season, tied Josh Richards of Shinnston, W.Va., atop the tour’s all-time wins list with his fourth-career series victory.

“That’s a lot of fun anytime you can come from where we started in eighth,” said Eckert, who earned his 24th career-victory at Lincoln. “We weren’t that good on the bottom and (Jason) Covert had the top locked up. But when he went out, I just Hail Mary'd it it to the top. The bottom a little rubber and got one-laned and I knew my only shot was to go to the top. And t worked out.

“I have to thank Paul Crowl for letting me drive this thing. He lets me go out and get after it.”

Satterlee, who was looking for his second victory on this year’s tour, was disappointed not to win the race, but was satisfied in claiming the $4,000 series title.

“We are a little disappointed about getting passed there at the end,” said Satterlee, who became the fifth different champion in the tour’s five-year history. “Congrats to Rick; he had a better car at the end.

“We felt like we were sitting ducks after the (final restart on lap 33), but it feels good to come out on top (in the points standings).”

Notes: The main event went green at approximately 9:20 p.m. local time and took just over 20 minutes to complete. ... The race was slowed by just two cautions. The first appeared on lap 12 when Coleby Frye broke down, while Jason Covert of York Haven, Pa., caused the lap-33 caution when he slowed with mechanical problems while battling Satterlee and Johnson for the lead. ... Stone earned the race’s hard charger award with his 19th-to-fourth charge. ... Jamie Lathroum of Mechanicsville, Pa., earned the tour’s $500 DirtonDirt.com-sponsored award for the most heat race victories on the series with his third prelim win Wednesday night. ... Eckert has now won three of his six starts in Crowl's No. 7 this season. ... Satterlee became the first series champion who was not at World of Outlaws Late Model Series regular while claiming the title. Previous champions: Tim McCreadie (2012), Austin Hubbard (2011), Eckert (2010) and Richards (2009). ... Gene Knaub made his first and only Speedweek appearance of 2013 in finishing ninth. ... Bobby Beard won the Limited Late Model feature.