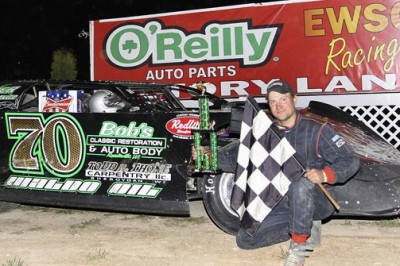 It didn’t take long for Todd Jensema to be reminded of the extremes of Dirt Late Model racing.

Returning to full-time racing for the first time since 2008, Jensema, 34, of Sheboygan Falls, Wis., made his first trip back to victory lane on May 24 at Manitowoc (Wis.) County Expo Speedway. A week later he destroyed his race car in a rollover wreck.

“I remember how frustrating it can be now,” said Jensema, who took over the Schueffner Racing ride after Craig Schueffner retired from driving. “You can definitely go from hero to zero real quick. But it’s amazing how all your fans are excited to see ya back out there and they’re right there with you for the highs and lows, too. That makes it a better.”

While the wreck was certainly a disappointing setback, Jensema is still happy to be back racing. After stepping away in 2008 to focus on his family farm, Jensema has found a perfect fit with his new car owners, father and son Cale and Leslie Schueffner.

“I always missed racing, but it was to the point where I didn’t have time or money to do it on my own,” Jensema said of his decision to take a break from racing in 2008. “I still go over there and help with the work, but at least if I’m busy on the farm they get the work done. It just makes everything a lot easier when you have someone helping with that and footing the bill.”

Putting together a new MB Customs Race Car will keep Jensema off the track for at least a week, possibly two, but he’s excited about the remainder of the season. While the missed races will likely take him out of the running for Manitowoc County’s track title, he’s looking forward to challenging for the weekly racing championship on the Wisconsin Dirt Late Model Association.

“It’s not gonna slow me down a bit. I’m still enjoying it and ready to get at it again,” Jensema said. “With us missing a couple nights now, I probably don’t have much of a chance at a tracks points, but we’ll shoot for the WDLMA deal and see how that works out. I’m pretty excited about what we have going.”

• Taking the lead June 1 after brothers Chad and Chris Simpson were sideline, Mark Burgtorf of Quincy, Ill., outdueled two-time World 100 winner Brian Birkhofer for a victory at 34 Raceway in West Burlington, Iowa. "Racing with Brian and beating him makes this the race of the year for me," Burgtorf said.

• Unbeaten in regular-season action at Delaware International Speedway, Ricky Elliott of Seaford, Del., won his sixth race of 2013 at the Delmar, Del., track on June 1.

• Although Luke Pestka led the first 23 laps, Tyler Bruening of Decorah, Iowa, won his third of the year at Independence (Iowa) Motor Speedway on June 1 after taking control on a restart with two laps remaining.

IMCA: Nick Marolf of Moscow, Iowa, is on top with 336 points over fellow Iowans Tyler Bruening (306) of Decorah and former champ Darrel DeFrance (304) of Marshalltown.

SECA: Michael Brown of Pageland, S.C., moved into the lead of the first-year Southeastern Crate Association presented by City Chevrolet. He has 212 points to lead Trent Ivey (206) of Union, S.C., and Mac Owens (203) of Woodruff, S.C.