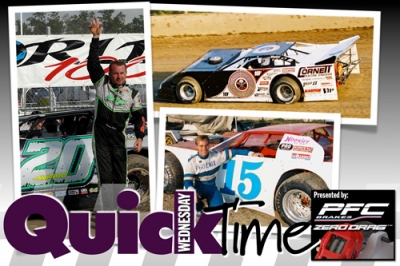 Regional: Kyle Berck of Marquette, Neb., swept a pair of victories on the Nebraska-based Super Late Model Racing Series at Mid-Nebraska Speedway in Doniphan and Dawson County Raceway in Lexington.

With the $100,000-to-win Dream XIX upon us this weekend, let’s take a look at the state that has produced the most winning drivers at Eldora Speedway’s biggest events, the Dream and World 100 (and the once-held Eldora Million). And while we do, you might find yourself humming the tune to “Rocky Top,” Tennessee’s state song.

Among Eldora’s crown jewel events, Tennessee-based drivers have visited victory lane 15 times. It doesn’t hurt that the Volunteer State has been represented by multiple-race winners Scott Bloomquist of Mooresburg (who owns a race-high five Dream victories), Jimmy Owens of Newport and the now-retired Jeff Purvis of Clarksville.

And it may be a while — or forever — before any state can approach Tennessee’s standard. Home-state Ohio has produced 14 winners, but just one apiece in each the Dream (Matt Miller in '05) and World 100 (Bart Hartman in ’09) since 1997.

And while Arkansas has an impressive eight victories, they all belong to a single driver, six-time World 100 winner Billy Moyer of Batesville, Ark., who has seemingly been in the twilight of his career for a half-dozen years or more.

Next on the list is Iowa (six victories, including Brian Birkhofer’s World 100 last year), Georgia (five victories, including Shane Clanton’s Dream XVIII) and Kentucky (four victories, but none in the last nine seasons). Beyond that, three states have two crown jewel victories at Eldora (Pennsylvania, Indiana and Wisconsin) while three more have a single victory (Florida, South Carolina and Louisiana).

Can a driver from a non-winning state crack victory lane this year? Or will be humming “Rocky Top” once again?

Turn 2: So much for alimony

Quick Time is always interested in clever race promotions, even if it doesn’t involve Dirt Late Models. And Senoia (Ga.) Raceway has a June 15 promotion that in all likelihood won’t involve Late Models, but it sounds like lots of fun. Well, at least for the spectators.

The Divorcee Demo Derby will pit ex-spouses against each other as they “smash it out with two tons of steel,” according to the racetrack announcement.

Studies always show that the most common reasons for divorce are infidelity, financial disputes, sexual issues, etc., but surely how your spouse drives can at least get under you skin, right? (Someday I’m going to tackle teaching Julie how to use the passenger-side mirror; give me time).

Anyway, couples that couldn’t get along in real life will go at it in a demolition derby, which sounds like a great way to tear up a bunch of cars. Maybe they should throw the divorce lawyers in the mix, too?

Brownstown (Ind.) Speedway and Florence Speedway in Union, Ky., just 90 miles apart, have long shared many of the same standout drivers over the decades, but with both tracks favoring Saturday nights, it’s rare they’ve had back-to-back events or drivers who have captured championships at both ovals. But 2013 might be an outlier.

On Tuesday, the Lucas Oil Late Model Dirt Series announced that Florence and Brownstown will run back-to-back events on the circuit Sept. 20-21 in a schedule shuffle forced by Saturday’s rainout of Florence’s Ralph Latham Memorial.

The bad news? Brownstown’s once-grand Jackson 100 will be scaled back to a $10,000-to-win race. The good news? Fans who enjoy both tracks can watch drivers tackle Florence’s long straightaways and tight corners one night before battling the next on the wide-open quarter-mile Brownstown oval.

When it comes to Late Model drivers who have captured championships at both tracks, the list is quite exclusive, according to former Brownstown promoter James Essex, now the announcer with the Lucas Oil Series. Essex reports that only Hall of Famer Gene Petro won titles at both tracks, both before Dirt Late Model racing’s modern era. He won three titles at Brownstown from 1963-65, then added the 1970 title at Florence, then called Northern Kentucky Speedway.

This season, Tim Prince of Heltonville, Ind., is making a bid to match Petro’s feat. Prince captured the 2006 Late Model crown at Brownstown, and midway through the season he’s leading the Florence points. He’ll have his work cut out, though, as he’s just 12 points ahead of Duane Chamberlain of Richmond, Ind., and 37 points ahead of Nick Latham of Winchester, Ohio.

June 7, 1997: In one of the wildest races in Eldora Speedway history, Jimmy Mars of Elk Mound, Wis., fought off Steve Barnett of Franklin, Ind., to capture Dream IV and a $100,000 payday. A Scott Bloomquist-Bill Frye collision while they battled for the lead, and subsequent retaliation by Frye under the ensuing caution, helped open the door for Mars.

June 9, 2001: Donnie Moran of Dresden, Ohio, earned the richest payday in Dirt Late Model history, overtaking Don O’Neal on the 25th lap and leading the rest of the way in the Eldora Million at Rossburg, Ohio.

• Two teenagers will make the 28-car starting field for the 100-lapper.

• A Kentucky driver will finish among the top five for the third straight year.

• At least six chassis brands will be represented among the top 10 finishers in the 100-lapper.