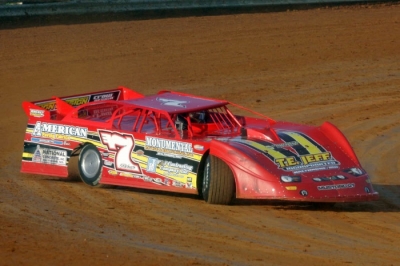 Eckert, who drove Paul Crowl's No. 7 Rocket Chassis in the event instead of his usual No. 24 Bloomquist Race Car, led the 40-lapper flag to flag, but had to overcome pressure from Dan Stone, Gregg Satterlee and Austin Hubbard as the top four drivers raced through heavy lapped traffic between laps 30 and 34.

Stone briefly took the lead on the backstretch on lap 33 during the exciting tussle, but Eckert pulled back ahead before the lap was completed. The tension lessoned a lap later when Stone got turned around in the fray and brought out the race's fourth and final caution.

Eckert remained out front in the six-lap run to the finish to claim victory in the fourth race on the Pennsylvania-based tour. Hubbard of Seaford, Del., settled for second after charging through the field from the 13th starting spot, while Satterlee of Rochester Mills, Pa., who won Monday's Speedweek event at Roaring Knob Motorsports Complex in Markleysburg, Pa., finished third after starting 11th.

Jamie Lathroum of Mechanicsville, Pa., followed his runner-up finish from Monday night with a fourth-place finish Tuesday, while Davey Johnson of Latrobe, Pa., rounded out the race's top five finishers after running as high as second. Stone of Thompson, Pa., finished 16th.

"Out in the open, I was OK. But getting into traffic I broke loose and (Stone) drove right by me," said Eckert, who recorded his third-career victory at Port Royal. "I don't know what happened cause they said he was turned around. I hate that for him cause he was leading the points."

The victory helped ease the disappointment of Eckert's run Monday night at Roaring Knob, where he struggled to a 14th-place finish.

"We were so bad last night, but I guess winning makes up for everything," said Eckert, a regular on the World of Outlaws Late Model Series. "Hopefully we can go down to Lincoln (Speedway) tomorrow and get us a win there."

Tuesday's race was originally scheduled to be the fifth of six races for the series, but Sunday's race at Winchester (Va.) Speedway was rained out. Vic Coffey of Caledonia, N.Y., won the tour's opener Friday at Potomac Speedway in Budds Creek, Md., while Jason Covert of York Haven, Pa., won Saturday at Hagerstown (Md.) Speedway and Satterlee won Monday at Roaring Knob.

The series wraps up its fifth season Wednesday with a $7,000-to-win event at Lincoln Speedway in Abbottstown, Pa.

Notes: Vic Coffey brought out a lap-8 caution when he made contact with Stone on a restart and cut a right-front tire; Coffey stormed back from the tail to finish sixth. ... The feature went green at approximately 9:45 p.m. local time. ... Grant Adams won the 358 Late Model feature. ... Stone was fastest in time trials for the third straight event.