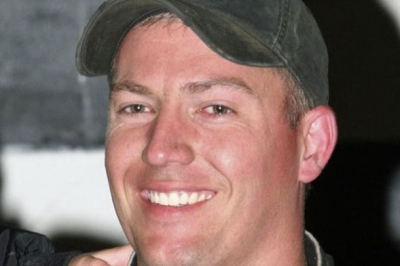 Chad Simpson remembers well his most recent trip to Eldora Speedway. In fact, he probably won’t ever forget it.

Making his fourth visit to the famed half-mile oval in Rossburg, Ohio, for last year's World 100 in September, the Mount Vernon, Iowa, driver not only qualified for his first-career start in one of Eldora’s major events, but also won a heat race to earn the pole starting spot for the 100-lap feature race. | Complete Dream XIX coverage

Simpson led 28 of the first 30 laps and remained among the contenders most of the way. After briefly slipping back to fourth, he was battling Scott Bloomquist of Mooresburg, Tenn., for second late in the race before a broken axle on a lap-91 restart turned what was shaping up to be a career highlight into a major heartbreak for the 34-year-old Iowan.

“That one there probably hurt more than any others,” said Simpson, a regional standout who last season claimed his third consecutive championship on the Iowa-based Corn Belt Clash Late Model Series. “I’ve fell out of a lot of races over the years and lost the lead in a lot of races, but that’s one that’ll probably stick with me the longest.”

Simpson will head back to Eldora this weekend in hopes of finding some redemption for his heartbreak last September. He’ll be among the likely 100-plus entries for the $100,000-to-win event that kicks off with twin preliminary feature both Thursday and Friday before wrapping up with heat races and the 100-lap UMP DIRTcar-sanctioned main event on Saturday.

Simpson is not only looking to avenge his World 100 heartbreak in his return to Eldora this weekend; he’s also hoping to prove that last year’s strong showing wasn’t a fluke.

“I told my guys when we left 'All right, this just means we have to come back next year and make sure we get in the show, run strong again and finish the job,’ ” Simpson said. “I don’t want it to be one those deals where you just had good luck and everything went your way. That’s the way that place kind of is, but we feel like we can run with those guys every time we go there now, and we want to prove that.”

While a strong run this weekend would definitely help to dim the bitter feeling from last year’s disappointment, it likely wouldn’t erase the memory altogether. The tremendous high that he felt while leading and running up front, followed by the severe disappointment, left a lasting impression on Simpson.

“I remember cruising around there; the first 30 laps went by so fast,” Simpson recalled of the race, which was eventually won by Brian Birkhofer of Muscatine, Iowa. “It all kind of sunk in right there around lap 30. I was just like 'Wow, this is really happening.’

“We slipped back and ran third to Brian and Scott there pretty much the whole race and was catching Scott back up. That caution came out and I just remember looking up at the scoreboard and seeing it was lap 91. I just thought to myself 'Man, I can’t believe this. I’m 91 laps into the World 100, running in the top three and looking to pass Scott Bloomquist for second.’

“It was a pretty amazing feeling, but then the axle broke and it was all over. I touched the gas and it wouldn’t go. It was over.”

As disappointing as the end result was, Simpson took plenty of positives away from his first Eldora major-event start. If nothing else, he’ll have plenty of confidence heading back to Eldora this weekend.

“To be up there and win a heat race and start on the pole of a feature and to lead 30 laps of it was all amazing, let alone to be right there in contention 75-80 laps in,” Simpson said. “We’ve always known we could run with those guys there if we could ever just get in the show. Now that we proven that, it definitely makes us excited to go back.”

While he felt his Bud and Denise Brinkman-owned race team was well-prepared for the World, the team is working extra hard in the days leading up to the Dream to do all they can to make sure Simpson’s MasterSbilt Race Car is ready to go the entire distance this time around.

“You’re only as good as your equipment and how hard you work,” Simpson said. “We worked our butts off and got our team into that position, but I guess it just wasn’t enough. Sometimes you can’t control those part failures. But we’re doing all we can to make sure we’ve got everything ready to go and hopefully make the show and make it all the way this time.”

Simpson has plenty of reason to believe he’ll be just as strong this weekend at Eldora as he was at the World. In 10 totally starts this season, Simpson has notched three regional victories between Corn Belt Clash and Lucas Oil MLRA action. And he’s coming off a solid fifth-place finish in the first major event he entered this year at the $30,000-to-win Lucas Oil Show-Me 100 May 25 at Lucas Oil Speedway in Wheatland, Mo.

“We’ve got good race cars and good engines and everything seems to be working really good right now,” Simpson said. “I just hope we can go back out there this weekend and get into a good spot in a heat race and get ourselves back into the feature where we can get back in that position.”

While he proved last season that he’s capable of running well at Eldora, repeating that feat won’t come easy for Simpson as he prepares to face one of the largest and most competitive fields that any Dirt Late Model event will draw this season. He’s also still lacking quite a bit when it comes to experience racing on Eldora’s high banks with only four previous appearances at a track where experience is hard to come by thanks to the track’s traditional format that has included very little practice time.

But Simpson will at least have the opportunity to log plenty of laps at Eldora this weekend after the track adopted a new format for its major events this season.

Expanding on its traditional format of two-lap qualifying on Friday followed by heat races, consolation races and the main event Saturday night, Eldora will host preliminary events on Thursday and Friday leading into the Dream and World 100 for the first time this season.

Action kicks off Thursday with a complete program of time trials, heat races, consolation races and twin 25-lap features paying $2,500 to the winners. Friday night will feature a repeat of Thursday’s format with both features paying $5,000 to win. The qualifying laps from Thursday and Friday will be used to determine their starting spots in Saturday’s heat races.

Simpson sees the new format as a positive, especially for drivers like him, who have limited seat time at Eldora.

“For guys like us who’ve only been there three of four times, the more times we can get around that racetrack ... that just helps you get more familiar and more comfortable with the place,” Simpson said. “I don’t think we’re gonna go out there Thursday or Friday and find a magic setup or anything. But the more track time you get and the more comfortable you get, the better off you’ll be.”

While his race team’s weekend goal, like all of his previous Eldora trips, is simply to make the Dream feature, Simpson admits his personal expectations are elevated after his strong performance last season.

“In the past, our goal has always been just to go out there and get in the show,” Simpson said. “But I’ve got pretty high expectations anywhere we pull into, especially when I know we can run with those guys. So we’re going out there knowing that we want to win and we’re gonna do our best to do it.”