Clanton rises to No. 2 spot in power rankings 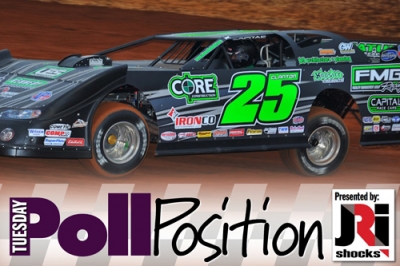 Shane Clanton of Zebulon, Ga., moved to a season's-best No. 2 in DirtonDirt.com’s Top 25 power rankings this week after clicking off his fourth World of Outlaws Late Model Series victory of the season. Clanton is 46 points behind WoO points leader Josh Richards in the poll presented by JRi Shocks.

Clanton (pictured), who has six top-five finishes in his last seven starts, earned $10,000 for June 1’s WoO victory at Stateline Speedway in Busti, N.Y., as he trimmed his deficit to Richards in series points.

The driver on the rise in the poll continues to be John Blankenship of Williamson, W.Va., who rose four positions to No. 7 after his second Lucas Oil Late Model Dirt Series victory in his last three starts. He’s one spot behind Tim McCreadie in the rankings. The Watertown, N.Y., driver edged up to No. 6 with two weekend victories.

An idle Billy Moyer of Batesville, Ark., slid three spots to No. 9, but there was little movement in the rankings outside the top 10, and no newcomers to the poll

Comment: Runs into trouble while leading at Tazewell, forcing him to give up the lead and retire from Lucas Oil event. Series points: 7th (Lucas Oil). Last week's ranking: 12th (nc)

Comment: With Dream XIX on horizon, he was leading at 34 Raceway when radiator hose issues forced him out. Series points: None. Last week’s ranking: 20th (nc)