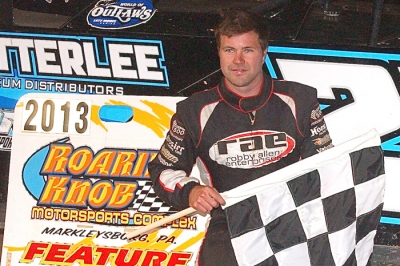 MARKLEYSBURG, Pa. (June 3) — Gregg Satterlee of Rochester Mills, Pa., bided his time in Monday’s Appalachian Mountain Speedweek presented by Harbaugh Amusement main event at Roaring Knob Motorsports Park before taking advantage of a late restart to overtake polesitter Jamie Lathroum of Mechanicsville, Pa., on his way to a $5,000 victory in the fourth scheduled event for the six-race miniseries. | Slideshow | Video

Satterlee, who claimed his second-career victory on the Pennsylvania-based tour, made the most of the race’s second and final restart with 34 of 40 laps complete, sneaking by Lathroum for the lead. He then held off Lathroum in the closing laps to become the third different winner in three races on this year’s tour. A fourth race was rained out.

“I was just trying to wait to make my move,” said Satterlee, who earned his third overall victory of the season. “Jamie was real good on the bottom, but my car just stuck in the middle on that restart and we made the pass and then just tried to hold him off the last five laps.

“I have to thank everyone who helps on this car. They gave me an awesome car tonight.”

Lathroum, who was also looking for his second-career series victory, settled for second after leading the first 34 laps of the race from the pole. He seemed to have the race in control, but the double-file restarts the series used for the first time during Monday’s main event ended up costing him.

“Well, I guess we gave one tonight,” said Lathroum, who rebounded from a disappointing night in the tour’s previous event Sunday at Hagerstown (Md.) Speedway when he missed the main event lineup. “But I guess we will try again tomorrow. We were one of the teams pushing for the series to go to the double file restarts and I guess it worked to our disadvantage tonight. But all in all, a good night.”

The series wraps up with two more Pennsylvania races at Port Royal (Pa.) Speedway Tuesday and Lincoln Speedway in Abbottstown Wednesday. Tuesday’s race pays $5,000 to the winner, while the finale at Lincoln pays $7,000.

Notes: Satterlee’s Rocket Chassis is powered by a Roush Yates Engine and sponsored by Satterlee Petroleum Distributors, East American Motorsport, and Zero Wraps. ... The 40-lap feature took 21 minutes to complete and was slowed by two cautions. The first appeared on lap 16 for D.J. Trautman’s spin in turn two. Tim Senic caused the lap-34 caution when he slowed from the third position with engine woes. ... The series used double-file restarts for the first time during the main event. ... Chad McClellan won the RUSH Crate Late Model portion of the program. ... Heat race winner Dan Stone of Thompson, Pa., rallied from the tail of the field to finish eighth after engine issues forced him to unload his backup car for the main event. Stone earned the race’s hard charger award. ... Making his first Speedweek start of 2013, former series champion Rick Eckert of York, Pa., drove Paul Crowl's No. 7 Rocket to a 14th-place finish. ... Kenny Moreland and Kenny Pettyjohn each tagged the turn-three wall during time trials; neither driver recorded a qualifying time. ... Tim McCreadie of Watertown, N.Y., topped a 50-car field for a $5,000 victory in the 2012 Speedweek event at Roaring Knob.