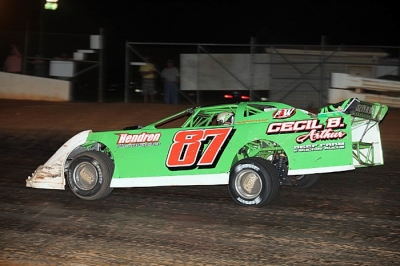 NATURAL BRIDGE, Va. (June 1) — Two-time series champion Walker Arthur of Forest, Va., rebounded from a disappointing night Friday with an outstanding night in Saturday’s Steel Block Bandits event at Natural Bridge Raceway, leading every lap of the event on his way to a $1,500 victory. | Slideshow

Arthur, who was moving forward Friday night at nearby Eastside Speedway in the opening leg of the tour's doubleheader weekend before running into trouble, had no problems Saturday at Natural Bridge in racing to the sixth series victory of his career and his first of the season.

Gerald Wolfe finished second in the 30-lap race followed by Tim Stalnaker of --- in third. Greg Roberson of Waynesboro, Va., who won Friday’s series event at Eastside, finished fourth with Andy Fries of Mercersburg, Pa., claiming his second top five of the weekend with a fifth-place finish.

Notes: Arthur’s MasterSbilt by Huey is sponsored by Cams Racing Engines and Cecil B. Arthur Beef Farm. ... Arthur scored a $10,000 unsanctioned victory at Natural Bridge late last season. ... With Saturday’s victory, Arthur moved into a tie with Joey Leavell of Waynesboro, Va., for the Steel Block Bandits victories in the five-year history of the Limited Late Model Series. ... The tour takes a few weeks off before returning to action June 29 with a visit to Susquehanna Speedway Park in Newberrytown, Pa.