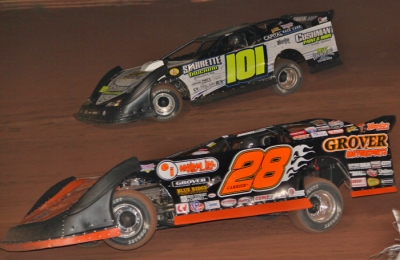 Roberts won the side-by-side duel among the frontrunners in the final laps for a $5,000 payday while Carrier, of Salt Rock, W.Va., settled for a runner-up finish in the 25-car field.

“That was a great race. I thought that he had got me there a couple of times. But our Capital Race Car was just so good up on the top and we were able to keep our momentum going up top to keep the lead,” said Roberts, who won his debut at the 3/8-mile oval. “My hat’s off to Eddie, he could have drove me dirty there and pulled a bad slide job but he didn’t. He’s a professional and it showed during that race. I appreciate him running us clean like he did.”

Roberts, who also won on the series May 10 at Cleveland County Speedway in Lawndale, N.C., became the first repeat winner on the series in six races.

At the outset, Roberts jumped to the lead with the third-starting McGuire slipped by Carrier while fourth-starting Chris Ferguson was out of action early with his car’s rear end problems. Carrier got second from McGuire on the restart while Dohm worked toward the top five.

Up front, Roberts and Carrier were duking it out with Roberts on the high side, with the exception of occasions to get around slower traffic, while Carrier gave chase.

With three laps remaining, Carrier dove under the leader in turn three and the frontrunners emerged from turn four in a dead heat. The duel continued in the race’s waning moments with Carrier repeatedly pulling even. As the duo exited turn four for the final time, Roberts barely held on, crossing the finish line 0.168 seconds ahead.

“That was a lot of fun,” Roberts said. “This is a neat track. It’s fast and racy. I am glad we were able to get the win.”

Carrier enjoyed the battle with the Georgia invader.

“That’s the way it’s supposed to be, you know?” Carrier said. “We raced each other so hard and never beat and banged. He gave me room to race and never pinched me and did my best to race him clean.

“I didn’t want to door him on that last lap because that’s just not how I race. We will take second from that and be happy with it. I believe those folks up there got their money’s worth tonight.”