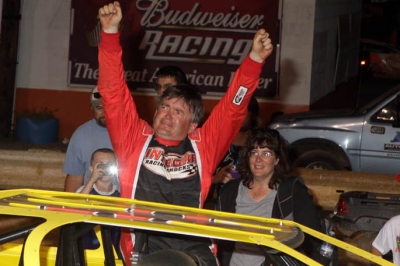 After drawing the pole in a redraw before the feature, Covert, who debuted a new Rocket Chassis in the event, took the lead on the start of the 40-lap race and held command for the entire distance. He pulled away from Gregg Satterlee of Rochester Mills, Pa., through the race’s middle stages en route to claiming the second Appalachian Mountain Speedweek victory of his career.

“It’s pretty good when you pull the number one pill, so we’ll take it,” Covert said. “We had Gregg (Satterlee) there and if he’d been in front of us there, I’m sure it would have been in reverse order or Stoney (Dan Stone), as fast as he was tonight. We’ll take the luck of the draw.”

Satterlee advanced from the eighth starting spot to take second by lap seven but he ran into trouble when his car lost power steering a few laps later. He managed to maintain his position even with the ailing car but failed in finding a way around Covert in settling for the runner-up finish.

“We had a little maintenance issue, the power steering broke about ten or twelve laps into the race,” said Satterlee, who improved on his 11th-place finish in Friday's opening round feature. “I was just trying to hang on to it the last 25-30 laps as much as I could. It really makes a difference. The track was in good shape. It was a good night and we’ll try to keep the momentum going tomorrow.”

Dan Stone of Thompson, Pa., also moved forward early, climbing from ninth to third in the opening laps. But he was shuffled back on a restart and could only manage to climb back to third. Stone, who lowered the track record during qualifying, led Tyler Hershey of Mercersburg, Pa., and former series champion Austin Hubbard of Seaford, Del., in rounding out the race’s top five finishers.

“It’s frustrating to be that good," said Stone, who joins Covert as the only drivers to finish among the top five in both series races. "That one restart at the beginning when we lost a couple spots when we had already got up to third. It’s a shame with the crowd and do single file restarts. It could have been a better show with double file restarts like we did last night. We’ll take it but we’re definitely not happy with it. It was one of those nights.”

When the green waved, Covert was out of the starting gate with fifth-starting Hubbard into second and Stone charging from seventh into third before the opening lap was completed.

Following a restart on lap three for debris on the track, Stone fell to fifth as Hershey charged into fourth while Satterlee got past Hubbard to take over the runner-up position.

Covert had Satterlee on his bumper following a lap-nine restart while Stone was back into third within two laps.

Covert stretched his lead to more than a second by the halfway mark and continued to pull away even more. With ten to go, Covert was all but three seconds ahead and closing on the rear of the field.

He reached lapped traffic on lap 34 and in two laps, had three cars shielding himself from Satterlee. He cruised the remaining distance, winning by 2.341 seconds over Satterlee.

“I want to thank Barry (Klinedinst) for getting me this new car,” Covert said. “We worked about two months on it. This is all because of him; he lets me do this. It’s a dream for me to get to race and to race in a big race like this at Hagerstown; it’s humbling and it means a lot. Thanks to Barry for all he does for me. These guys behind us are good. If we’d reversed the role, we’d just have been reversed.”

Notes: Covert’s Barry Klinedinst-owned Rocket Chassis is powered by a Hershey’s Racing Engine and sponsored by Pre-Mach Fabricators and Machinists, Red Wing Shoes and Lias Tire. ... Covert earned his second regional victory of the season at Hagerstown. The first came in a Three State Flyers event March 31; the $3,000 victory was his 100th for his Late Model career. ... Covert’s previous Speedweek victory also came at Hagerstown on June 6, 2009. ... Vic Coffey of Caledonia, N.Y., finished seventh after winning Friday’s opening round event at Potomac Speedway in Budds Creek, Md. ... Jamie Lathroum slammed into the wall coming out of turn four during hot laps and suffered heavy damage; he unloaded his backup car but failed to make the main event. ... Jeremy Miller loaded up following hot laps. ... Stone broke Rick Eckert's previous track record of 18.096 seconds during time trials. ... The first four qualifiers in each group were inverted for heat races, and the top three finishers in each heat redrew for feature starting spots.