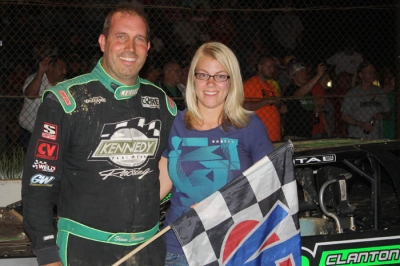 BUSTI, N.Y. (June 1) — Shane Clanton made sure he gave his better half a 25th birthday present to remember Saturday at Stateline Speedway.

Racing at a track where his wife Michelle grew up watching her father Ron Davies in action, Clanton surged into the lead on lap 11 and marched on to a $10,550 victory on the World of Outlaws Late Model Series.

"Michelle's birthday is today," said Clanton, whose wife's hometown of Warren, Pa., is less than a half-hour drive from the third-mile Stateline oval. "She sent me a message this morning and said, 'I need a W for my birthday.' I got her one I guess.”

Clanton, 37, of Zebulon, Ga., registered his fourth win of 2013, equaling his single-season career-high on the WoO LMS. He has won three of the national tour's last eight events and sits second in the points standings, 34 points behind Josh Richards of Shinnston, W.Va., who finished sixth after starting 24th because a broken valve spring in his primary car's engine forced him to hastily switch to his backup machine and relinquish the sixth starting spot.

Mike Knight of Ripley, N.Y., chased Clanton for the final 12 laps but wasn't able to draw close enough to make a serious bid for his first-ever WoO victory. The 26-year-old settled for a career-best finish of second, flashing under the checkered flag 1.194 seconds behind the victor in the 50-lapper.

Defending WoO LMS champion Darrell Lanigan of Union, Ky., who started ninth, climbed as high as second following a lap-33 restart but finished third. It was his seventh consecutive top-three run on the tour.

John Volpe of Lakewood, N.Y., also recorded a career-high WoO finish, placing fourth in a head-turning run forward from the 11th starting spot. The 22-year-old racer traveled most of last year's tour as a crew member for Chub Frank of Bear Lake, Pa., and still works for Frank during the week, but he isn't accompanying Frank on road trips this season so he can pursue his driving career by competing on a weekly basis at Stateline and Eriez Speedway in Hammett, Pa.

Rick Eckert of York, Pa., advanced from the 12th starting spot to complete the top five. He reached fifth place on lap 44 when he overtook Clanton's father-in-law, Ron Davies of Warren, Pa., who set fast time, won a heat and started from the pole position but failed to lead a lap and faded to a seventh-place finish.

Clanton started sixth — moving up one row from his original starting spot thanks to Richards's car change that sent him to the tail of the field – and steadily steered to the front. His deciding maneuvers came on a lap-nine restart when he immediately passed Knight for second and on lap 11 slid underneath race-long pacesetter Rick 'Boom' Briggs of Bear Lake, Pa., for the lead.

"We were just waiting, biding our time," said Clanton, whose only previous starts at Stateline came in the track's WoO events in 2005 (he finished third) and 2006 (seventh). "(The leaders) were after their tires pretty hard there early in the race and I was just waiting and waiting and waiting, just easing up to 'em. The opportunity came on the double file restart (on lap nine). I got under Boom and he pushed a little bit and gave me just enough room to get by him.

"We had a good car all night," he added. "We were good on the bottom just picked 'em off one at a time."

After easily handling restarts on lap 18 and 33, Clanton cruised to his 20th career series victory. He was greeted in victory lane by a throng of well-wishers, including many of his wife's family members and friends and his car owner John Kennedy, who flew across the country from his home in Phoenix to spend the weekend with his team.

"This is like racing at home for me now,” Clanton said. "We've picked up a lot of fans around here because we've spent so much time at Ron's shop the last few years. It's like all of Ron's fans have become my fans now, too.”

Clanton also noted the deep-seeded history that his wife's family has at Stateline. Michelle's late grandfather (and Ron Davies's father-in-law), Leonard Briggs, was one of the track's five founders in 1956.

"The coolest thing about (winning at Stateline) is (Michelle's) grandfather built it," said Clanton. "She's fond of her grandfather, misses him a lot, so for her to have a win here at a big race is pretty special."

Knight, a two-time Dirt Late Model champion at Eriez, outdueled Lanigan for second place by hustling his Rocket machine around the extreme outside of the track but didn't have the speed to deal with Clanton.

"I'm really happy with our run tonight," said Knight, who started third. "These guys are some of the best out there, and it's fun to run side-by-side with them when they come here.

"I'd like to finish one place further (ahead), but maybe next time. I'll keep trying. It's a good payday anyway for us being weekend racers."

Finishing in positions 8-10 was Tim Fuller of Watertown, N.Y., who started 16th; WoO LMS rookie Eric Wells of Hazard, Ky., who started 17th; and Frank, who rallied after pitting on lap five to change an axle that broke as he was battling for fifth place with Clanton.

Six caution flags slowed the event, including a lap-33 yellow for David Scott of Garland, Pa., who stopped in turn two while running in third place.