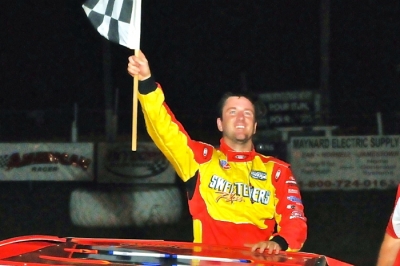 EAST SMETHPORT, Pa. (May 31) — Tim McCreadie is making the most of his trip through the Northeast.

After running third for much of the race, McCreadie came alive following a lap-21 restart. He took second from Ron Davies of Warren, Pa., on lap 22 and the wrestled the lead away from Dave Hess Jr. of Waterford, Pa., seven laps later. | Slideshow

Notes: McCreadie’s Warrior Race Car is sponsored by Sweeteners Plus, Four Star Transmissions and Keizer Aluminum Wheels. ... All 25 drivers started the 50-lap feature. Fourteen were running at the finish. ... Rob Blair's night ended when he tangled with Shane Clanton on a lap-10 restart and tagged the turn-one wall. ... Chub Frank of Bear Lake, Pa., drove Boom Briggs backup No. 99 machine; Frank retired early in the main event. ... Max Blair of Centerville, Pa., topped 25 competitors in the RUSH Crate Late Model portion of the program. ... The series visited NDRL's McKean County Raceway for the fourth of thirteen scheduled dates this season. ... Next up for ULMS competitors is a June 12 stop at Sharon Speedway in Hartford, Ohio; the series returns to McKean County two days later for a pair of events June 14-15.