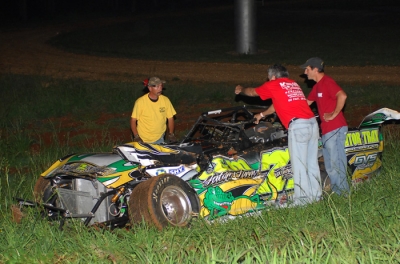 Chris Wall, who cracked three vertebrae in his neck in a flipping accident May 9 at North Alabama Speedway, should be able to heal from his injuries without surgery, according to news posted by his wife Missy Wall on the team website. The 39-year-old alligator farmer from Holden, La., the 2006 titlist on the Mississippi State Championship Challenge, was told Monday by a neurologist to wear a neck brace for at least six weeks. Wall also suffered a concussion.

"The prognosis looks good for healing without surgery being required if no farther damage is inflicted," the website post said. "It is not a very pretty thought that a little more severe of injury or another possible injury to the neck area could end his livelihood as we know it."

Wall was up to speed in hot laps preceding the O'Reilly Southern All Star Series event at North Alabama Speedway near Tuscumbia., Ala., when his car began barrel-rolling and flipped over turn one. He was able to walk away from his mangled No. 71 car with assistance and was taken to a nearby hospital while other teams helped load the wrecked car.

"(Chris) really wants the racing family to know how special he feels to be a part of it and the gratitude he has for all the prayers and well wishes he has received," Missy Wall wrote on the website. Send get-well wishes to 26192 Hwy 42, Holden LA, 70744, or through his website at www.intimagatorracing.net. — Kevin Kovac and staff reports

RECONSTRUCTION POSTPONES LAWRENCEBURG'S PLANNED OPENER: Because the reconstruction and enlargement of Lawrenceburg (Ind.) Speedway from a quarter-mile oval to a high-banked, 3/8-mile layout isn't quite complete, the May 17 World of Outlaws Late Model Series has been postponed indefinitely. "There’s still some work left to do to finish the job," series director Tim Christmas said, "and (Lawrenceburg promoter) Dave Rudisill and his staff don’t want to run a national event at a facility that isn’t 100 percent ready to go because that wouldn’t be fair to the teams or the fans.” Virtually all of the physical reconstruction — financed by $3.5 million from the City of Lawrenceburg — is complete, including the redesign of the track; the erection of an outside wall and catch fence; and the addition of nearly 1,700 new bleacher seats in turn two. But just one-third of the new clay surface had been applied by the end of last week, and with a flurry of rain delaying the completion of the surfacing, the track isn't expected to be ready until at least May 24. An unsanctioned Dirt Late Model event is scheduled for June 14. — Kevin Kovac

CEDAR LAKE ANNOUNCE DRIVERS GETTING SHOW-UP MONEY: Hall of Famer drivers Billy Moyer of Batesville, Ark., and Scott Bloomquist of Mooresburg, Tenn., are among 30 drivers who took Cedar Lake Speedway up on plans to help pay fuel costs for the July 31-Aug. 2 USA Nationals at the New Richmond, Wis., track. The track offered to pay 30 teams 50 cents per mile in show-up money for committing to the $50,000-to-win event. The team shop had to be at least 200 miles from the track. Moyer ($416), a five-time USA Nationals winner, and Bloomquist ($461), a three-time winner, were joined by drivers including Jimmy Owens of Newport, Tenn.; Darrell Lanigan of Union, Ky.; Brian Birkhofer of Muscatine, Iowa; Shannon Babb of Moweaqua, Ill.; Tim McCreadie of Watertown, N.Y.; Chris Madden of Gray Court, S.C.; Steve Shaver of Vienna, W.Va.; Chris Wall of Holden, La.; Jackie Boggs of Grayson, Ky.; Clint Smith of Senoia, Ga.; and David Gentry of Lewisburg, Tenn. — From track reports

ODDS AND ENDS: Eldora Speedway has made 74 more camping sites available for reservation for the Dream and World 100. The graveled sites in Lot No. 3 are 20 feet by 50 feet, but tents and campfires aren't permitted in that lot. Make reservations beginning May 15 by calling the track at (937) 338-3815. ... The Colorado Late Model Association rescheduled its May 10 at Gillette (Wyo.) Speedway for May 17.