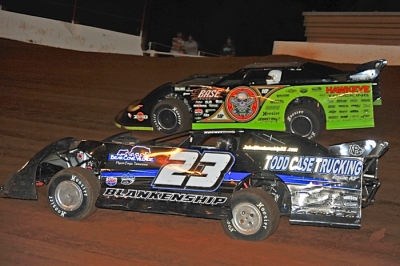 The seventh-starting Blankenship, who won for the second time in his past three races, took the lead on lap nine of Tazewell’s Toyota Knoxville 50 when race leader Scott Bloomquist of Mooresburg, Tenn., pulled to the pit area. | Slideshow

Blankenship held off a Steve Francis of Ashland, Ky., shortly after taking the lead and later turned back several challenges from Jimmy Owens of Newport, Tenn., before pulling away late in the race on his way to claiming his third overall victory of the season and second in Lucas Oil Series action.

The attrition-filled race was slowed by six cautions and a red-flag period when Bobby Pierce of Oakwood, Ill., went for a wild ride that collected Bloomquist. Pierce was uninjured in the accident, while the damage to Bloomquist’s car was enough to knock him out of the race, handing the lead to Blankenship.

"Yes that was a tough race,” said Blankenship, who races out of a shop in nearby Knoxville, Tenn. “Francis got me on the restart and then we were finally able to make it stick.”

“I saw Jimmy's nose a couple of times; I got a little excited, but we kept at it and it feels good to win so close to our race shop in Knoxville. I am glad that Bobby's (Pierce) ok, I saw Scott (Bloomquist) slide in there, he must have gotten a lot of damage, because I saw him pull out of the race."

With the victory, Blankenship moved by Don O’Neal of Martinsville, Ind., for second in the series points standings.

“We came into this season looking to win the championship and with a win tonight it sure helps,” said Blankenship, who travels with the series to Florence (Ky.) Speedway for another event Saturday night. “Two wins out of the last three, so we hope to keep the momentum going at Florence tomorrow night. That's a track we need to improve our performance at."

Owens, who was coming off a $30,000 victory in last week’s Lucas Oil Show-Me 100 at Lucas Oil Speedway in Wheatland, Mo., survived some late-race problems while maintaining his points lead with another strong finish.

"We were just hanging on there at the end,” said Owens, whose car began trailing smoke late in race. “I don't know if it was an oil leak or what, fortunately we were far enough ahead of those other guys, but we will go through the car and get ready for Florence. The track was racy tonight; there must have been a full-moon or something.”

Notes: Blankenship's Rocket Chassis is powered by a Cornett Engine and sponsored by Coal World’s Energy, Todd Case Trucking, Fast Lane, VP Race Fuels, Bear Cove Village and Integra Racing Shocks. ... Blankenship earned the sixth Lucas Oil Seires victory of his career and his first at Tazewell. ... Erb earned the Optima Batteries Hard Charger of the Race Award for his run from 17th to fourth. ... All 21 entries started the race. ... The series moves to Florence Speedway in Union, Ky., Saturday for the $10,000-to-win Ralph Latham Memorial.