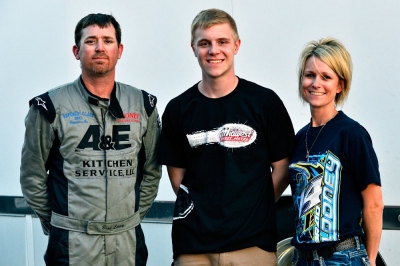 While Brad Looney has been among southwest Missouri’s most successful Dirt Late Model racers over the last few decades, there’s suddenly another Looney on the horizon.

Looney’s 19-year-old son Payton, making just his ninth career Late Model start, grabbed his first victory May 24 at Callaway Raceway in Fulton, Mo. The only downside? His parents weren’t there to see it because Brad was competing at Lucas Oil Speedway’s 21st annual Show-Me 100.

“We’re pretty proud of him,” Payton’s mom Nicki Looney said the next day as she and Brad talked about the success of the sophomore engineering student at Missouri State.

Originally, such a racing conflict among the Looneys wasn’t supposed to happen. While Payton had dabbled in legends racing, his parents originally decided it would be best if none of their three boys took up racing before Brad decided to retire.

“I told the boys they could race, but not until their dad finished,” Nicki Looney said. “But this opportunity came up and we couldn’t pass it up.”

The younger Looney became the first ULMA rookie to grab a victory since 2010, and he’s got the early lead in the rookie chase.

Knowing the obstacles young drivers can face in trying to carve out a career, Brad, who has more than 220 victories and a MARS DIRTcar Series championship to his credit, hopes Payton doesn’t run into some of the difficulties. “I hope it’s a little easier,” he said.

Nicki has found herself more nervous watching Payton race than she ever did with Brad. “It's about more than I can take,” she said with a laugh.

With Brad competing in Show-Me 100 preliminaries in Wheatland, Mo., Nicki monitored Payton’s progress through a series of texts and phone calls from Niehoff throughout the night.

Payton Looney ran third early at Callaway before getting shuffled back to eighth. But he quickly rallied back into contention. “Payton turned into a madman and went to the front,” Niehoff relayed to Nicki.

In the race’s closing moments, Nicki anxiously kept the phone close to receive Niehoff’s updates: “There’s a caution with four laps to go and he’s leading ... I’m telling you your son is phenomenal.”

After the race, Nicki texted Payton’s phone, expressing congratulations from his parents.

“Thanks,” he replied in a text. “I learned from the best.”

• At Delaware International Speedway, Ricky Elliott of Seaford, Del., captured a seven-minute 20-lapper on May 25 for his fifth straight victory at the half-mile oval. He’s unbeaten at DIS in 2013.

• Joseph Joiner of Milton, Fla., earned $1,500 with a May 25 victory at his hometown Southern Raceway for his seventh victory in his last eight starts at the track going back to 2012.

• With his May 25 victory at East Bay Raceway Park, Keith Nosbisch of Valrico, Fla., won his seventh straight Late Model start at the Tampa, Fla.-area track going back to last season.

• In May 25 double features at Senoia (Ga.) Raceway, Tod Darda of LaGrange, Ga., captured both races.

• Winning his first race for Schueffner Motorsports, Todd Jensema of Sheboygan Falls, Wis., took the checkers May 24 at Manitowoc County Expo Speedway. Jensema, taking the seat of the retired Craig Schueffner, notched his first victory since 2008.

IMCA: Nick Marolf of Moscow, Iowa, and Tyler Bruening of Decorah, Iowa, have once again swapped the points lead with Marolf now holding a 30-point lead over Bruening. Jeremiah Hurst of DeWitt, Iowa, is third, 62 points out of the lead.

AMRA: Defending champion Chris Garnes of Evans, W.Va., overtook Andy Bond of Coolville, Ohio, for the top spot over the weekend. Garnes now leads Bond by 34 points with K.C. Burdette of Parkersburg, W.Va., in third, another 38 points back.

ULMA: Justin Russell leads the way on the Missouri-based Limited Late Model organization with 542 points. Chris Cox is second with 508, while defending champion Jason Russell, who didn’t compete in ULMA-action over the weekend, slid from first to third 482.

WDLMA: Justin Hirt leads as of May 26 by five points over Todd Jensema and seven points over Jim Schmidt.
WISSOTA: Through May 17, defending champion Chad Becker of Aberdeen, S.D., leads by 29 points over Nate Beyenh of Rock Rapids, Iowa, while series veteran Lance Matthees of Winona, Minn., holds third, five points back of Beyenhof.

SECA: Mac Owens of Woodruff, S.C., and Trent Ivey are tied atop the standings on the first-year Southeastern Crate Association with 179 points apiece. Joey Phillips is eight points behind the co-leaders.

Among non-touring and independent special events at dirt tracks around the country during Memorial Day weekend:

Jacksonville (Ill.) Speedway (June 2): In a race pushed back two days because of rain in the forecast, the MaryLee Standridge Memorial, which includes a Midwest Big 10 event for Super Late Models along with Midwest Open Wheel Association sprint cars.