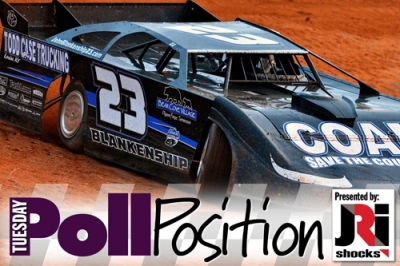 While the top 10 remained mostly steady today's DirtonDirt.com’s Top 25 power rankings, John Blankenship of Williamson, W.Va., crept within one spot of that mark by virtue of his $20,000 Bad Boy 98 victory at Batesville (Ark.) Motor Speedway on the Lucas Oil Late Model Dirt Series.

Blankenship is ranked a season-high 11th in the polling presented by JRi Shocks while Josh Richards of Shinnston, W.Va., idle over the weekend, maintained the top spot in securing 17 of 21 first-place votes. Richards, the World of Outlaws Late Model Series points leader, has been atop the regular-season polling that started after Florida Speedweeks all but one week.

Positions No. 2 through No. 9 were stagnant with Don O’Neal of Martinsville, Ind., second in the poll followed by Darrell Lanigan of Union, Ky., Shane Clanton of Zebulon, Ga., and Lucas Oil Series points leader Jimmy Owens of Newport, Tenn. Owens is the only other driver with first-place votes.

One of the country’s hottest Dirt Late Model drivers, Doug Drown of Wooster, Ohio, makes his first appearance in the Top 25 at No. 22. He’s won five of his last six starts overall including a $12,000 payday at Southern Ohio Speedway’s Southern 100.

Returning to the poll is Bobby Pierce of Oakwood, Ill. His Batesville debut went south after a solid time trial, but he salvaged the weekend with a home-track victory at Vermilion County Speedway in Danville, Ill., his first on the Sunoco American Late Model Series.

Comment: Fresh off his La Salle victory, he backs it up with a second-place run at Batesville’s Bad Boy 98. Series points: None. Last week’s ranking: 25th (+6)