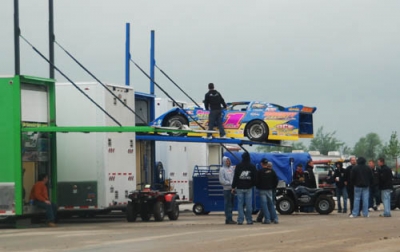 Most teams loaded up before evening rains came. (DirtonDirt.com)

Scott Bloomquist of Mooresburg, Tenn., was the fastest of 80 qualifiers in Friday's time trials. He'll start on the pole of the first heat. Other heat race polewinners were Earl Pearson Jr., Will Vaught, Jimmy Mars, Bloomquist, Steve Casebolt and Shannon Babb. The six 10-lap heat races, with the top three finishers transferring to the feature event, will be followed by consolation races and the 100-lap feature. The track's modifieds are also in action.