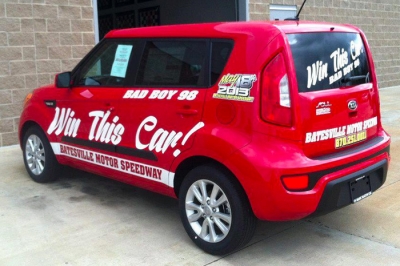 This Kia Soul will be driven away by a lucky fan Saturday in Batesville. (lucasdirt.com)

Someone will drive to a $20,000 victory this weekend at Batesville Motor Speedway. And someone else will drive home in a brand new vehicle.

The Bad Boy 98, the May 16-18 event at the Locust Grove, Ark., track, provides a big payout to the winner of the Lucas Oil Late Model Dirt Series along with a new Kia Soul to a lucky fan paired with the winning driver. It adds an extra element of suspense for the first of two series visits to the high-speed, 3/8-mile oval. | Batesville practice rained out

“The series is excited to be going back to Batesville Motor Speedway twice this year, not only for the Comp Cams Topless 100 but for the second annual Bad Boy 98 as well,” series director Ritchie Lewis said. “We enjoy working with (track promoters) Mooney and Connie Starr every year and want to see this springtime event grow into something big every year for the great fans in that area.

“It’s a really cool deal for the fans to get a chance to drive a new car home from that event. To see all the fans that were matched up with each driver last year was exciting to watch as each one rooted for their driver to win. It’s a great promotion and event that everyone should attend.”

In a promotion sponsored by Mark Martin Ford and Kia in Batesville, each Bad Boy 98 fan will receive a special ticket at the main entrance for a random drawing Saturday night. Track officials will draw out tickets and match a fan with each driver starting the 98-lap main event, and the luckiest of those fans will join the winning driver in victory lane to check out the new wheels.

The next-richest Super Late Model event for the weekend is Saturday’s 34th annual USA 100 at Virginia Motor Speedway in Jamaica, Va., one of the country’s longest running Dirt Late Model events. Jamie Lathroum of Mechanicsville, Md., will be gunning for his second straight victory in the Ernie Shelton-founded event sanctioned by the Ultimate Super Late Model Series.

A preview of national and regional touring events and unsanctioned specials for May 17-19:

Event: Second annual Bad Boy 98, sponsored by Batesville’s Bad Boy Mowers with a showroom and warehouse near the racetrack.

Notes: Don O’Neal of Martinsville, Ind., leads the series points heading to Batesville. ... Brady Smith of Solon Springs, Wis., won the previous series event at La Salle, Ill., and is expected to be among the entrants at Batesville. ... An autograph session is scheduled for Saturday. ... Mark Martin Kia will have the 2013 Kia Soul on display during the weekend. ... The Mark Martin Museum and gift shop at Mark Martin Ford will be open through the weekend for fans to see the history of the NASCAR driver’s career.

Notes: Brandon Thirlby leads the overall series points. ... All four events are on the ALMS West Region schedule; Kankakee and Fairbury are East Region events as well. ... Chad Simpson is the only two-race winner on the series. ... Fairbury’s race will be its season opener. ... The Charleston and Danville ovals don’t host weekly Late Model divisions.

Notes: Karsyn's Krusaders 40 is a fund-raiser for cancer awareness at the Mississippi Valley Fairgrounds oval. ... Rick Wendling won the previous series event at Elko (Minn.) Speedway. ... QuickCar Racing Products Quick Six will receive a new MD3 nose courtesy of Karsyn's Krusaders. ... The event is be on live pay-per-view via XSAN.tv. ... IMCA Late Models will also be in action along with modifieds and street stocks.