Richards solidly in No. 1 spot in power rankings 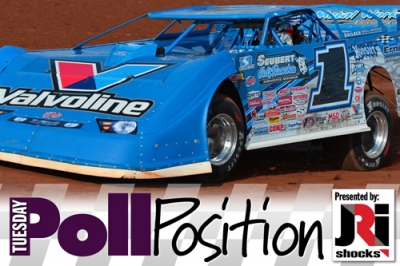 Another rainy weekend meant little movement in DirtonDirt.com’s Top 25 power rankings this week as Josh Richards of Shinnston, W.Va., remained in the top spot of the poll presented by JRi Shocks.

Richards, the World of Outlaws Late Model Series points leader, kept a secure hold on the top spot with 14 of the 21 first-place votes cast in the weekly poll. He’ll lead his WoO foes to weekend races at I-30 Speedway near Little Rock, Ark., and Whynot Motorsports Park near Meridian, Miss.

Lucas Oil Late Model Dirt Series co-leader Jimmy Owens of Newport, Tenn., was the only other driver to earn first-place votes with seven, breaking his points tie with No. 3 Don O’Neal of Martinsville, Ind., his fellow co-leader on the national tour.

The top 12 spots in the poll remained unchanged from the previous week with Darrell Lanigan of Union, Ky., fourth followed by Billy Moyer of Batesville, Ark., the only driver in the top five to compete the first weekend in May. Sixth through 12th are Shane Clanton, Dennis Erb Jr., Jonathan Davenport, Brian Birkhofer, Tim McCreadie, Scott Bloomquist and Steve Francis.

Randy Weaver of Crossville, Tenn., returned to the poll in the 25th spot while Jason Feger of Bloomington, Ill., whose appeal of a tire-cheating penalty with the World of Outlaws was denied, dropped out.

The top 10 drivers are made up of four World of Outlaws drivers, three Lucas Oil Series drivers and three independents.

Comment: Goes back to work in the Warrior Race Cars house car with WoO action at I-30 and Whynot. Series points: 7th (World of Outlaws). Last week’s ranking: 19th (-1)