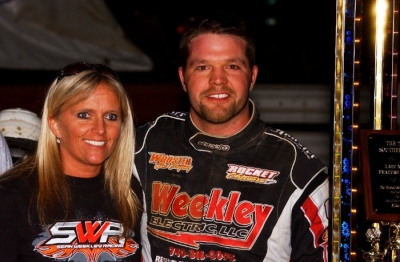 Doug Drown and his wife Joy in victory lane at Southern Ohio. (rickschwalliephotos.com)

WHEELERSBURG, Ohio (May 4) — Doug Drown of Wooster, Ohio, earned $12,000 on Saturday at Southern Ohio Speedway for the richest victory of his Dirt Late Model career. Drown took the checkers ahead of hometown driver and former track champion R.J. Conley in the Southern 100. | Slideshow

“Absolutely awesome,” the Weekly Racing driver said in victory lane. “It’s what we’ve all wanted to do here, the team. It just shows how good we’ve been here lately. ... We’ve been on a roll and knock on wood, we can keep that thing rolling.”

Fast qualifier Mike Marlar of Winfield, Tenn., who started 12th, rallied after pitting for a tire change to finish third while Josh McGuire of Grayson, Ky., and tail-starting Austin Hubbard of Seaford, Del., rounded out the top five in an unsanctioned race featuring six lead changes among five drivers.

Drown survived a mid-race scare when contact with Steve Francis of Ashland, Ky., while battling for the lead in turn two sent his car spinning, but a yellow flag had been thrown for another incident, keeping Drown in contention.

“I was trying to be patient, but I knew we had a good car, so I wanted to get to the lead and get out there,” said Drown, who started sixth.

Conley, who advanced 10 position for his runner-up finish, wasn’t surprised that the rough conditions forced many drivers out of the race.

Former race winner Jackie Boggs of Grayson, Ky., started on the pole and led three laps before pulling up lame and retiring, handing the point to Donnie Moran of Dresden, Ohio.

Steve Francis of Ashland, Ky., Friday night’s tuneup winner, and Drown overtook Moran and the ninth lap and battled out front for the lead with Francis taking control. But Drown pounced on a lap-26 restart, slipping under Francis in turn four to take over as Tim Dohm of Cross Lanes, W.Va., dropped Francis to third.

Drown led most of the second half of the race, but Tim McCreadie of Watertown, N.Y., stormed past to take the lead on lap 47 before he slowed with a flat tire five laps later. That gave the lead back to Drown, who led the last nine laps for the victory.

Notes: Drown’s Weekley Racing-owned Rocket Chassis is sponsored by Weekley Electric, EFCO Outdoor Power Equipment, Wooster Glass Company, DJ Directional Services and Hoosier Racing Tire. ... The victory was Drown’s fourth in his last eight starts. ... Last year’s race winner Eddie Carrier Jr. of Salt Rock, W.Va., was among those failing to make the feature along with Jonathan Davenport of Blairsville, Ga., who had a flat tire in his heat race. ... Steve Francis earned $4,000 in dominating Friday’s preliminary feature. ...Southern Ohio's next Late Model special is a $2,000-to-win event on May 24.