Payne runs away for MLRA win at Lakeside 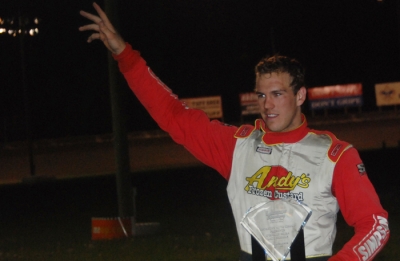 KANSAS CITY, Kan. (May 7) — Polesitter Jeremy Payne knew he had a fast enough car to win the O'Reilly Midwest LateModel Racing Association event at Lakeside Speedway. What the Springfield, Mo., racer wasn't certain about was whether he had a cool enough engine to finish the 40-lapper. | Notebook | Slideshow

"I was a little bit worried when it was already to 230 (degrees) on the first yellow, then I was just trying to keep it cool under yellow," said Payne, who ended up leading all the way to earn $3,000. "At the end, I was getting signals that I had a pretty good lead, so I was trying to take it easy, because it was climbing up there pretty good at the end. It was running 250, so that's never very good on a motor."

At what temperature would the Arizona transplant, who drives for Terry Phillips Motorsports, have pulled out of the race? "As a racer, it's almost never. To make your car owner happy, it's about 260, 270 there and you pull in because you're going to start causing a problem. I think everybody ran hot. It was just the track. It was so fast, motors never had time to cool off."

Payne's victory lane celebration was delayed because he made a quick trip to the pits for water to cool the engine, but he returned to pick up his trophy for his second victory of the year with MLRA, where he leads the series points.

Fellow front-row starter Clint Smith of Senoia, Ga., hung with Payne through the early stages of the race, once nearly pulling alongside when Payne got too high exiting turn four on the 17th lap. But Payne began pulling away with 10 laps remaining as he built a cushion of five lapped cars by lap 33 and took the checkered flag a straightaway ahead of Smith in lapping all but six starters in the 25-car field.

Smith's engine got hot, too, but he blamed a poor start for hampering his chances. "I hit the (frontstretch) fence on the start after I forgot to turn my three-wheel brake switch on, and I let him get me on the start. I was going to drive around him in the corner down there, and that was the difference."

Later in the race, "I got a run on him, but I got hot and had to back off of it," Smith said. "I got into traffic and started dicing and I said, 'To hell with it.' I wanted to at least finish second."

Phillips, also of Springfield, finished third while fourth-finishing Al Purkey of Coffeyville, Kan., was a half-track behind the leader. Clint Bowyer, the NASCAR star and former modified champion at Lakeside, finished fifth after regaining the spot from Alan Vaughn in the race's late stages.

Bowyer's teammate, two-time Dirt Track World Champion Shannon Babb, started seventh but never made much progress before pulling off on the 11th lap. The race was slowed by three cautions, none for serious incidents. Tommy Elston ended up in the infield on the first lap to drawn the first caution, Mark Voigt slowed with damage on the ninth lap and Bryant Goldsmith's smoking car came to a stop at the turn-four entrance on lap 12.

Payne, also an ace in modified racing, notched his first victory in Kansas City in either division. "I was real confident in my car from the start. It was unbelievable," Payne said. "You hardly ever get a car that drives that well."

Jeremy Payne of Springfield, Mo., earned the pole position for the midweek O'Reilly Midwest LateModel Racing Association feature at Lakeside Speedway on a night when former track champion Clint Bowyer was in action. The $3,000-to-win feature for the 25 drivers on hand is coming up later Wednesday night. Payne was a heat race winner at the half-mile track along with Al Purkey of Coffeyville, Kan., and Clint Smith of Senoia, Ga.

Bowyer, winner of last weekend's NASCAR Sprint Cup race in Richmond, Va. and a two-time modified champion at Lakeside, finished second to Purkey in the first heat. Bowyer is pitting with his own dirt team and driver Shannon Babb of Moweaqua, Ill.

In the first heat, Purkey started outside the front row and led every lap over Bowyer while Alan Vaughn finished third. In the second heat, the seventh-starting Payne took the lead from polesitter Chad Frewaldt on a lap-eight restart and led the rest of the way in outrunning Frewaldt and and Tim Karrick, a two-time Lakeside modified champion from Basehor, Kan., driving the backup car of Denny Woodworth of Quincy, Ill. In the final heat, Smith blew past the race-long leader Babb on the ninth lap and led the rest of they way to beat Babb and Terry Phillips, who was a distant third.

Weather forecasts were for 70-80 percent chance of rain, but Wednesday's heavy rain showers were all south of the racetrack. A few lingering showers were on the radar and cloudy conditions surrounded the track. ... The Late Models were the only division in action at the track that doesn't run Late Models weekly. ... On a late restart in the first heat, Bryant Goldsmith got out of shape exiting turn four and had to give up his fourth spot to restart on the tail. ... On the first heat's final lap, Denny Woodworth slipped out of the groove and got into the turn-two wall, collecting Goldsmith. ... Larry Clawson Jr. spun twice to bring out cautions in the second heat. ... Retired driver Steve Kosiski was lending a hand in the pits for his older brother Joe's No. 53. ... Late Model rookie Mike Ryun of Pleasant Valley, Mo., a regular in the United Late Model Association weekly action for Limited Late Models, made his first MLRA appearance. ... Rusty Dukes, a former MLRA rookie of the year who hasn't raced in recent seasons, was entered in the T.J. Kuykendall-owned car driven last year by Jason Bodenhamer. ... Brantlee Gotschall and Larry Clawson Jr. got together in turn two in the second hot-lap session. ... All the 25 cars in attendance received two hot-lap sessions after the track was initially slimy.