Notes: Janowski off to a hot start at Brownstown 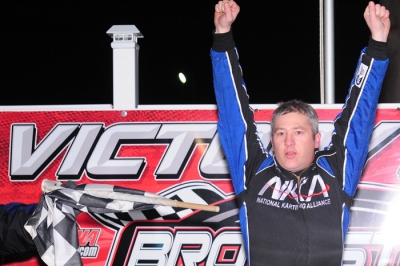 Joe Janowski is hoping for a breakout season in 2013. With just one race in the books, it’s far too early to tell if the Carmel, Ind., driver is indeed on a breakout path, but he at least started the year off on a positive note Saturday with a victory in the season opener at Brownstown (Ind.) Speedway. | Slideshow

“It’s always a big boost to win right out of the gate,” said Janowski, who topped Kent Robinson of Bloomington, Ind., in Saturday’s 25-lapper, which served as a tuneup for this weekend’s Lucas Oil Late Model Dirt Series-sanctioned Indiana Icebreaker at Brownstown. “Anytime you can put a win on the board, that’s good, but to do it right off the bat, that’s a pretty big deal. Hopefully that’s a sign we’re headed for a big year.”

Janowski has plenty of reason to believe he’s capable of a successful 2013 campaign. Entering his sixth season of Late Model competition, the former go-kart racing standout feels he has finally found a stable medium among the many factors that make a race team competitive, with everything from his driving experience, his equipment and even his crew members all finally gelling at a competitive level.

“This is really the first time I’ve gone into a season basically exactly where I left off the previous season,” said Janowski, who claimed first-time victories at both Brownstown and Florence Speedway in Union, Ky., during his solid 2012 season. “It’s the same crew chief, John Schulte, the same car, the same shock package, the same springs. Everything was working well last year and it’s basically as we parked it.

Janowski’s development in Late Model racing hasn’t been an overnight success. He made the transition from karts to Late Models in 2008, but his learning curve has been stretched by a busy work schedule that only allows him to race in roughly 20 races each year.

But even with the limited seat time, Janowski has progressed each season while competing against the stout regulars that both Brownstown and Florence have to offer. He’s also found that Late Models are totally different from kart racing.

“It’s been a helluva challenge,” Janowski said. “These cars just have so much movement and roll that it’s really a wild sensation when you’re not used to it and you’re used to driving things that are really stiff and really rigid. It’s a totally different beast.”

But Janowski has been up to the task of adapting to Late Model racing as proven by his performance Saturday night at Brownstown, when he outdueled Robinson, who ranks among the sport’s most promising up-and-coming drivers.

“Anytime you go wheel to wheel and pass a guy like Kent Robinson, who’s really a top-level guy, that’s definitely a notch in the your belt,” Janowski said.

Janowski will have plenty more top-level competitors to contend with this weekend when the Lucas Oil Series invades Brownstown. The national tour boasts one of the most competitive driver rosters in the country with drivers like Jimmy Owens, Scott Bloomquist, Don O’Neal and many others making it difficult for local drivers to even break into the top 10 at a series event.

But Janowksi is excited for Saturday’s race, even if his odds of winning are slim at best. He looks forward to the opportunity to further his Late Model experience by racing against some of the sport’s top competitors.

“I respect all those guys a lot. When you run against those guys, it’s literally like running in the middle of a pack of rabid dogs,” Janowski said. “Those guys are so good at what they do. When you race with them, there’s literally a fraction of inch between you and you’re leaning on each other. You learn a lot whether you do good or you don’t.”

Janowski has set his goals high for the event. In a race where many local competitors just hope to make the feature lineup, Janowski has his eyes on at least a top-10 performance. But he isn’t ruling out an even better finish either.

“A realistic goal, really for me, is to target a top 10,” Janowski said. “There’s always the off chance that all your stars line up and everything falls in a perfect way where you have a decent shot at going for a top five or even to win. But I’ve raced at the very highest levels of karting ... and I know that when you are operating at that top level, where guys like Bloomquist and O’Neal and Owens are at, those guys are hitting on all eight cylinders all the time.

“For a guy like me to come in with a lower-end operation that doesn’t do this full time, I’ve gotta have everything going perfectly and those guys have to have an off night. But when it comes down to it, I would say that realistically a top 10 is a win for us at that caliber of a show.” — Joshua Joiner

As Devin Gilpin stood between his open wheel modified ride and his Jesse Puckett-owned Late Model Saturday night at Brownstown Speedway, he looked focused at the job that was on hand.

A few hours later Gilpin of Columbus, Ind., ran ninth in only his second-career Late Model start and was victorious in his modified for the 18th time at Brownstown’s quarter-mile oval. Gilpin, 22, was happy with his night’s work, but his sights are set even higher this weekend as the Lucas Oil Series invades his home track and he prepares to again compete in both divisions.

“Ever since I was a little kid, I would be at the Jackson 100 and dreaming of the day I could run against guys like Don O’Neal, Jimmy Owens and Scott Bloomquist, and to get the chance to do it here at Brownstown, well I can’t wait,” said Gilpin, who last year won 36 modified features on his way to his first UMP DirtCar crown.

“There is a world of difference between a modified and Late Model, getting used to the bigger tires, more horsepower. I just have to learn what to tell the crew to make changes on the car during the night. Driving a Late Model full time has been a dream of mine forever, and that’s what I would like to do.”

Gilpin’s only previous start in a Late Model came two years ago when he drove Chad Stapleton’s Barry Wright Race Car. But after teaming with Jesse Puckett this season, he’s aiming to make Super Late Model racing a full-time gig.

“This deal with Jesse Puckett came together when Steve Alcorn, a photographer from Ohio, hooked me up with him. He’s got some great equipment here, a Rocket Chassis and a Roush-Yates Engine,” said Gilpin, who hopes to add more Late Model dates to his schedule for 2013.

Gilpin’s racing heritage runs deep. Both of his grandfathers, the late Chuck Gilpin and Don Fleetwood, raced for several years at tracks in south-central Indiana, while his father Todd, who was in action Saturday night at Brownstown in a Late Model, was the 1988 Late Model Rookie of the Year at Brownstown and was co-champion in the track’s modified division in 1997.

Even though Gilpin is about to take a deep-plunge against some of the best drivers in the country in Saturday’s Icebreaker, he knows there will be a lot of eyes on his performance.

“I don’t think I put a lot of pressure on myself,” Gilpin said. “I want to do well against those guys; I want to prove that I belong. Some of those guys have been racing 25-30 years and this will only be my third Late Model race. I just don’t want to make the race, I want to run the entire 50 laps the best I can.” — James Essex

The event is the Lucas Oil tour’s first race since February’s Dart Winternationals miniseries at East Bay Raceway Park in Gibsonton, Fla. Don O’Neal of Martinsville, Ind., sits atop the series championship standings going into the event and enters the weekend as a favorite to win after claiming last year’s Icebreaker.

O’Neal, a three-time runner-up in the Lucas Oil points chase, began his Late Model career at Brownstown in 1990. His Icebreaker victory a year ago marked his 52nd career win at the historic track. He is now third all-time at the track behind Jim Curry and John Gill in total victories.

“We always look forward to coming back to race at Brownstown,” said O’Neal, who drives the No. 71 Optima Batteries-sponsored MasterSbilt Race Car house car. “We have had a lot of success there in the past, but with the level of talent we have on the Lucas Oil Series, it’s going to be tough to repeat the win. The fans will definitely see an exciting race.”

Four-time series champion Earl Pearson Jr. of Jacksonville, Fla., is also excited for a return to Brownstown. The Bobby Labonte Racing driver has four career wins at the track and is coming off a $10,000 victory on the final night of East Bay’s Winternationals that ended the veteran driver’s two-year winless streak

“We have always seemed to run well there and it’s a track when its racy you can come from the back. There is plenty of room to pass and there are no walls or guardrails to tear up your car,” said Pearson, whose team welcomed engineer Kevin Rumley and driver Steve Shaver over the offseason. “Kevin Rumley has given the team a big boost since he came onboard. He completely redesigned the Longhorn Chassis and with the new Chevy engines we have, we feel we are going to have a very good year and excited to get to Brownstown.”

Other Lucas Oil regulars have had success at Brownstown throughout their careers. Two-time Lucas Oil Series champion Scott Bloomquist of Mooresburg, Tenn., has collected 10 Brownstown victories during his career, while two-time and reigning series champion Jimmy Owens of Newport, Tenn., has won twice. Dennis Erb Jr. of Carpentersville, IL, has three victories and Steve Francis of Ashland, Ky., claimed his lone Brownstown victory in a 1997 STARS-sanctioned event. — James Essex