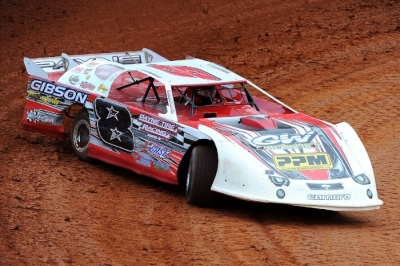 After more than 20 years in the sport, you might expect a driver to start slowing down a bit. Not so for David Payne. Instead of scaling back in 2012, the Murphy, N.C., driver’s 21st season of Late Model competition, Payne performed better than ever, racking a career-best 15 overall victories that were highlighted by three breakthrough performances. | Slideshow

“I’ve been racing a while, but I never had a year quite as good as this one,” the 39-year-old Payne said of this stellar 2012 campaign, which included first-time victories on the Southern All Star Series and Southern Regional Racing Series to go along with a triumph in Tri-City Racetrack’s Tar Heel 50. “We were really blessed to have the year we did. We won 15 races and three pretty big ones, so it was a pretty awesome.”

Payne is no stranger to double-digit win totals; in fact, he’s nearly reached the 15-win mark in past seasons. But his three special event victories are what help to set his 2012 season apart.

Since beginning his Late Model career in 1992, the second-generation driver has frequently competed with the Alabama-based Southern All Stars, even taking on the series full time in 2011, which led to a fourth-place finish in the tour’s points standings. But a victory on the nation’s longest-running touring series always eluded Payne, until he finally broke though for his first series victory during the tour’s visit to Toccoa (Ga.) Speedway.

“We ran second a lot with those guys before and just always came up a little short,” said Payne, whose runner-up finish in the 2011 Shamrock event at Cleveland (Tenn.) Speedway earned him a career-high $5,000 payday. “The (second-place finish) at the Shamrock might’ve paid more, but to win one of those races was pretty big for us. I’ve been wanting to win on that deal for quite a while.”

With the SRRS tour only in its seventh season, Payne hasn’t been gunning for a SRRS victory for nearly as long as he chased an SAS trophy, but his breakthrough on the SRRS series was just as special. Racing at Sugar Creek Raceway in Blue Ridge, Ga., where he won the track’s Super Late Model championship in 2001, Payne topped a host of series regulars in leading every lap.

“Any of those series races are pretty special to win,” said Payne, whose previous career highlights include a pair of victories on the now-defunct Tennessee Thunder DirtCar Series. “Even when its racing at one of the tracks we’re familiar with, you’re still going up against people that are racing at a level at the top of those series. You beat those guys and you know you’re doing pretty good.”

Perhaps Payne’s most impressive performance of the season came in the ninth annual Tar Heel 50 at Tri-County Racetrack in Brasstown, N.C., in October, when he withstood repeated challenges from national touring star Don O’Neal of Martinsville, Ind., to score a $3,500 victory in the unsanctioned event. Payne became the first home-state driver to win the Ray Cook-promoted race, which counts as his home track’s biggest annual event.

“To be able to fend off O’Neal to win the Tar Heel race, that was pretty big,” Payne said. “It was on our home turf in a prestigious race for our home area. Being able to put your name on that list — I found out later that I was the first local driver to win the Tar Heel race and even the first North Carolinian to win it. Ray has just done a great job with that race, and it’s definitely got a special place with us local guys.”

It may surprise some to see a driver like Payne have a breakout season so deep into his racing career. But it wasn’t a surprise for Payne.

With quality equipment provided by primary sponsor Andy Gibson of Gibson Motorsports and all the experience that his years of racing had earned him, Payne had a feeling 2012 could end up being something special if he and his team put in the necessary work. Joined by a volunteer crew led by Jason Loudermilk and Gary Thompson, Payne spent countless hours in the shop preparing for the season, in hopes that it would all pay off.

“You can kind of get a feeling when everything’s coming together, and I guess I noticed that a little before this season,” Payne said. “The first several years, I was learning and I’m still learning. Our equipment was a little less at the time, but right now I think that we have good enough equipment that we really oughta to be winning more of these races like we did this year. I think just the combination of experience and equipment and our hard work ... it just kind of all came together for us and we were able to put together a really good year.

“We have the capability to be running up front and competing to win these races. We’re not doing this for a living, but we’re finally starting to catch up with some of those guys that do it on a professional level. It’s neat for us to be able to compete against them and be competitive.”

His team’s improved performance in 2012 has Payne looking for even bigger accomplishments this season. He hasn’t set a definite schedule as of yet, but his preliminary plan is to continuing competing in regional events with close distance of his home while also mixing in a few weekly events. His goal for the season involves another career milestone Payne has yet to reach.

“If we can perform at the same level we did last year and still be able to win a few series races here and there, that’d be great,” said Payne, who mentioned that he’s taking a long look at running Ray Cook’s new Spring Nationals tour that consists of 10 events between March 15 and May 11. “I’d really like to add a $5,000 race to my resume. It would be good to up the winnings moneywise, but just winning some of those bigger races that pay $5,000 or $10,000, that’s kind of the next level we’re aiming to get to. Like I said, with the equipment we’ve got, I think we’ll definitely be knocking on the door to some of those this year.”