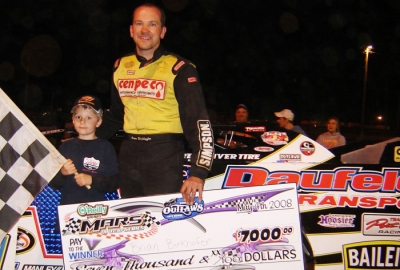 Brian Birkhofer still doesn’t have an official name for the new car he built with Jimmy and Chris Mars. But the Muscatine, Iowa, standout can certainly call the machine a winner after rolling to a flag-to-flag victory in the 40-lap World of Outlaws Late Model Series feature at Monett Speedway.

Birkhofer, 36, started from the pole position and was never seriously challenged en route to the $7,100 win, which came in the first-ever WoO event at Randy Mooneyham’s 3/8-mile oval. It was his fifth career triumph on the tour but first since July 25, 2006, at Lebanon I-44 Speedway, where he finished 18th in the previous night’s WoO show after blowing a tire while running fifth.

“I’m pretty pumped about this car now,” said Birkhofer, who won in his fifth start of 2008 behind the wheel of the chassis he designed with the Mars brothers. “We started on the pole so it’s not like we drove through the field, but a win’s a win — and against these guys, nothing comes easy.”

Wendell Wallace of Batesville, Ark., raced closest to Birkhofer, running in second place from lap eight to the finish. But the GRT house car driver, who started fourth, was unable to threaten Birkhofer on several restarts and crossed the finish line about two seconds behind the winner. Tim Fuller of Watertown, N.Y., finished third in the Gypsum Express Rocket, followed by Darrell Lanigan of Union, Ky., in the gottarace.com Rocket and 16th-starter Chub Frank of Bear Lake, Pa., in the Lester Buildings Rocket. Birkhofer actually didn’t realize that he was able to build a comfortable edge on Wallace after each of the race’s restarts.

“I figured Wendell was close,” said Birkhofer. “I really thought he was on my back bumper pushing me around there, so I just tried not to make any mistakes and stay on the bottom. After the first restart my tires felt like I didn’t cut ‘em up enough, so I was really nervous. I was just trying to drive straight and hit the traction off the corners so when I got the car turned it didn’t bind up.”

Birkhofer ended up victorious in his first career visit to Monett, a venerable 38-year-old track known as the Grand Old Lady. He felt right at home as soon as he eyeballed the facility. “It’s got some long straightaways and tight corners — kinda like I grew up (racing) on, only a little shorter than I like,” said Birkhofer, a product of the long, fast half-miles near his home in the Hawkeye State. “(Scott) Bloomquist always told me he had such a good record (of winning) the first time he rolled into a track. I don’t have a record like his, but I am proud of what I have accomplished.”

Wallace’s runner-up finish bettered his fourth-place run the previous night at Lebanon. It was worth a cool $4,100, including the $500 WoO Bonus Bucks as the highest-finishing non-WoO regular.

Fuller, meanwhile, scored a season’s-best finish after starting sixth. The 2007 WoO Rookie of the Year was in dire need of a strong run to staunch his early-season struggles and he got it. “I never would’ve thought a third would make me feel so good,” said a relieved Fuller, who slid inside Lanigan for third on a lap-35 restart and challenged Wallace in the closing circuits. “I thought we were good enough to get second.”

Lanigan also registered his top finish of the season after starting fifth. He had rung up six top-10 finishes in the first eight events of 2008 but couldn’t break into the top five until visiting Monett. “We needed a good run like this,” said Lanigan, who made a bid to pass Wallace early before fading slightly.

The 46-year-old Frank turned in the most stirring drive of the night, charging from outside the top 10 to fifth over the final 13 laps. He said his car seemed to come on after he absorbed a hit in the left-rear corner from Vic Coffey of Leicester, N.Y., who spun in turn one after the contact on lap 27.

WoO points leader Billy Moyer of Batesville, Ark., failed to finish after cutting a right-rear tire while running fourth on lap 27, and defending WoO champion Steve Francis of Ashland, Ky., managed only an 11th-place finish after a slip over the turn-four berm during his heat forced him to use a provisional starting spot.

Birkhofer's winning car is sponsored by Daufeldt Transport, J&J Steel and Simon Trucking. ... The Iowan's previous WoO victory also came in Missouri. He won July 25, 2006, at I-44 Speedway in Lebanon, Mo. ... Josh Richards of Shinnston, W.Va., lowered the track record with a 15.711-second lap in time trials, best among 40 drivers. ... The feature's first stoppage was on the eighth lap when Jeremy Payne and Jesse Stovall tangled in turn four, bringing out a brief red flag. ... A lap-10 yellow came out for Bill Frye in turn four. ... Terry Casey, who started 13th, worked his way into the top 10 but dropped out midway through the race, the feature's first casualty. ... A lap-27 caution came out for Vic Coffey and the yellow waved again on the restart for Billy Moyer's flat. ... A lap-35 caution came out when Richards pulled up with his flat tire.