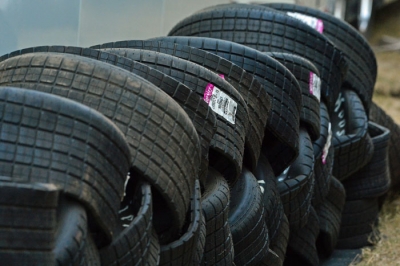 The Lucas Oil Series reached an agreement with Hoosier Tire as the sole series supplier. (rickschwalliephotos.com)

Citing an aim to reduce the amount of tires required by race teams, the Lucas Oil Late Model Dirt Series on Wednesday announced a new tire rule as part of an exclusive partnership with Hoosier Tire.

In a rule change series officials had told drivers they’d been considering, Hoosier will provide the series six tires — replated but identical to current rib construction right-rear tires being produced — that will be required for 2013 events starting with the March 23 Indiana Icebreaker at Brownstown (Ind.) Speedway.

The 9-year-old national tour had previously welcomed Hoosier and American Racer tires at series events, but in a press release, series officials said stiff competition between the tire companies created so many tire compounds and constructions that it was burdensome on teams to have the best tires prepared among so many choices.

“With the previous tire rule, it made events like the Show-Me 100 (at Lucas Oil Speedway in Wheatland, Mo.) and Topless 100 (at Batesville Motor Speedway in Locust Grove, Ark.) very complicated with no less than a dozen tire choices to be made during a driver’s tire selection,” said series director Ritchie Lewis. “We were hearing from the local and regional drivers and the series drivers loud and clear that they wanted something done for the past two years.”

Tire compounds for each series event will be announced beforehand; the series has announced tires legal through Memorial Day weekend races.

While the newly replated tires are, for now, required only on the right-rear corner of competing cars, the series will also limit which tires can be used on the left rear and front wheels. More details about compounds and specifics of the new rule are available at lucasdirt.com.

Because the newly replated tires are treaded, drivers without a large stock of rubber will be able quickly purchase and prepare tires during a race program, series officials said.

“We’ve worked for over two years to find a solution to reduce tire inventory and manhours associated with the needs to compete at our events,” said Rick Schwallie, assistant director for the series. “We consulted with series drivers, as well local and regional competitors to find some common ground for everyone. The biggest thing heard from most racers consulted was their wish for their local tracks to adopt the same tire rules as the (Lucas Oil Series).”