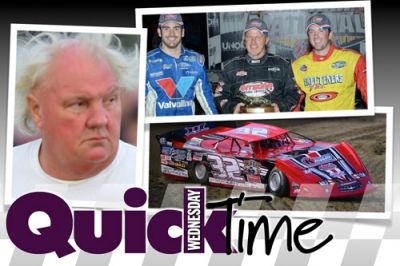 Take a quick lap around the proverbial dirt track with managing editor Todd Turner for a roundup of Dirt Late Model racing through the latest weekend of action along with some other quirks of racing (and the occasional ax-grinding). Quick Time appears throughout the regular season every Wednesday at DirtonDirt.com:

The most compelling storylines of Georgia-Florida Speedweeks:

Busy stretch: The 19 Super Late Model programs were the most in Georgia-Florida Speedweeks history, topping the 18 events in 2008 and ’12. (There were also eight Crate Late Model touring events this year preceding the Super Late Model action). And it appears it might get even busier next year with Golden Isles Speedway in Brunswick., Ga., which took a break from Speedweeks this year, planning three events in 2014.

Lanigan vs. Richards: Besides both winning four races — and both having stretches of three victories in a row — the long-time traveling-mates and fellow Rocket Chassis drivers also found themselves as key players in the most noteworthy soap opera of Speedweeks. Contact between the two in a Feb. 19 slide job at Volusia, then Lanigan’s public criticism of Richards after a Feb. 21 pileup, heightened friction that seemed to ease during Volusia’s final night as the drivers congratulated one another on the finale (for Lanigan) and week-long title (for Richards).

Geiger’s big moment: Veteran Bob Geiger of Laurel, Del., has competed in every Dart Winternationals at East Bay, but he hadn’t made a feature in nearly 25 years before cracking the starting lineup in the Feb. 13 main event.

McCreadie’s thriller: In the most dramatic finish of Speedweeks, Tim McCreadie fought off Darrell Lanigan and Billy Moyer on the final lap Feb. 20 at Volusia. The runner-up Lanigan was six-hundredths of a second behind McCreadie with Moyer 12-hundredths behind Lanigan.

Mark Whitener, Middleburg, Fla.: The Crate and Limited Late Model driver stepped up to Supers with aplomb, scoring runner-up finishes at Waycross and North Florida and proving he belongs.

Scott James, Lawrenceburg, Ind.: While a deal to pilot the Warrior house car developed just before Speedweeks, the team hit the ground running with three top-five finishes, including runner-up in the lucrative Ocala finale.

Mason Zeigler, Chalk Hill, Pa.: Spurred by the addition of crew chief Austin Hargrove, who helped Bart Hartman to a World 100 victory, the 20-year-old Zeigler impressed at Ocala and Volusia, winning a pair of heat races and running among the leaders in a few features.

Gregg Satterlee, Rochester Mills, Pa.: After launching Speedweeks with a top-five finish at Screven, that would prove to be his high-water mark. He made only five feature starts while competing at four tracks.

Jared Landers, Batesville, Ark.: The blue scheme on his Clint Bowyer Racing No. 5 didn’t bring much success as he made just four feature starts and posted a single top-five finish.

Eddie Carrier Jr., Salt Rock, W.Va.: He managed to make virtually every feature event, making 11 starts, but never ran among the leaders in posting a best finish of ninth.

Jimmy Mars, Menomonie, Wis.: His Speedweeks looked a lot like his lackluster 2012 season as Mars never finished better than seventh.

Shannon Babb, Moweaqua, Ill.: Sometimes in the wrong place at the wrong time, Babb ended up dropping out in each of his four feature starts at Volusia.

Backstretch: Be careful where you stand

The frightening Daytona International Speedway accident that sent a wheel assembly and assorted debris into the grandstands on a last-lap crash of the NASCAR Nationwide Series event got the headlines, but there were a couple of scary moments at dirt tracks during Speedweeks, too.

At North Florida Speedway in Lake City, Tim McCreadie of Watertown, N.Y., found himself on the slimy part of the frontstretch in hot laps and did the only thing he could in a split-second — try to steer out the turn-one exit between concrete barriers. It ended badly when the rear of McCreadie’s machine slapped the concrete and sent him spinning into the pits.

Although McCreadie didn’t want to have a wrecked car, in reality it probably was best he caught some concrete to keep him from heading deep into the pits at nearly full speed.

At Volusia Speedway Park in Barberville, Fla., Eric Jacobsen came upon a turn-four tangle and took evasive action by taking a right, exiting the top of the track at an opening in the wall. He was able to slow his car enough to avoid hitting anything — fortunately, it was an area few people stand — and later crept back onto the track to continue racing.

Both incidents turned out without any injuries, but it serves as a reminder and warning to those of us who sometimes find a spot near a track entry or exit to watch. It’s usually a dangerous spot, as North Florida found out previously when trackside observers suffered injuries in a similar event recently.

If you’re outside the track near an opening in the wall, ask yourself if it’s a safe place to be. Better safe than sorry.

Turn 3: Worth the trip

World of Outlaws Late Model Series competitors get a month-long break after Speedweeks, and that’s probably a good thing. Drivers and crews (and fans) will have to store up a little energy for a busy and long-traveling tripleheader weekend March 22-24.

From there it’s a 375-mile jaunt southeast to Whynot Motorsports Park near Meridian, Miss., the biggest of the three weekend tracks — but hardly a superspeedway as a slightly-banked, 3/8-mile oval where there’s always plenty of action.

The weekend wraps up Sunday at Duck River Raceway Park in Wheel, Tenn. — another 310 miles to the northeast. The raucous quarter-mile always provides excitement and will no doubt draw some fresh drivers from east Tennessee.

Are the highway and byway miles long? No doubt, but it’ll be worth it to catch the national tour on three fender-banging bullrings.

March 2, 1991: Wade Knowles of Tyrone, Ga., wins on the Hav-A-Tampa Dirt Racing Series at North Alabama Speedway in Tuscumbia, Ala., his first victory on the circuit.

March 2, 2008: Jimmy Owens of Newport, Tenn., leads the final 44 laps of the March Madness 60 at Cherokee Speedway in Gaffney, S.C., for a $10,000 victory on the O’Reilly Southern All Stars East circuit. Owens took the lead when rear-end problems caused Randy Weaver to spin out.

• The winner of the West Coast Shootout race March 6 at Las Vegas will capture the season points title.

• World of Outlaws regulars will win two of three events March 22-24 at I-30 Speedway, Whynot and Duck River.

• A Bama Bash feature winner in one of the Green Valley Speedway’s three Late Model divisions will also score a feature victory during Green Valley’s Crate Nationals the last weekend in March.

• Louisiana-based SUPR will have two first-time winners in its four March events.

• A UMP stalwart will win at least one of the two races on the fledging National Dirt Racing League March 29-30 at Paducah, Ky., and Pevely, Mo.