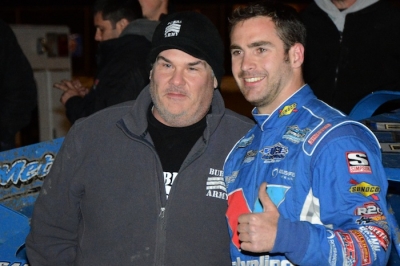 .062: Of a second margin for Tim McCreadie in his Feb. 20 victory at Volusia, the closest of any Speedweeks finish.

1: Rainout in 16 consecutive days of racing. It came in East Bay’s Thursday night event, giving fans and competitors a night off on Valentine’s Day and setting up a Saturday doubleheader.

2: Races with lead changes in the final two laps. Donnie Moran of Dresden, Ohio, led less than two laps in his victory at Waycross while Darrell Lanigan of Union, Ky., slipped by Mike Marlar of Winfield, Tenn., just before the white flag Feb. 16 at Ocala.

3: Drivers that won multiple events at one track: Dennis Erb Jr. at East Bay, Darrell Lanigan at Ocala and Josh Richards at Volusia.

4: Victories for Josh Richards and Darrell Lanigan, tied for the most among all drivers. Richards won at Screven, Ocala and two at Volusia, while Lanigan won three in a row at three tracks — one at North Florida, then two straight in Ocala — before capturing the Volusia finale.

5: Tracks where Billy Moyer of Batesville, Ark., competed, the most of any driver. Fourteen drivers competed at four racetracks.

5: Drivers finishing East Bay's finale without having to pit for a fresh right-rear tire.

9: Top-five finishes for Josh Richards of Shinnston, W.Va., in 11 feature starts, most of any driver. No other driver had more than six.

13: Feature starts for Vic Coffey of Caledonia, N.Y., most of any driver. Steve Franics had 12 starts and no other driver had more than 11. Coffey competed at four tracks with a best finish of fifth during East Bay’s daytime affair Feb. 16.

14: Georgia drivers who entered at least one Speedweeks event, most of any state. Pennsylvania was second with 12 entries.

15: Entries at Waycross, fewest of any Speedweeks event.

19: Complete race Super Late Model programs, the most of all time for Georgia-Florida Speedweeks.

22: States represented at Speedweeks, not including Canadian Ricky Weiss of Winnipeg, Manitoba.

38: Average age of Speedweeks winners with only one (three-time winner Josh Richards) under the age of 37 and only three (Richards, Shane Clanton and Tim McCreadie) under 40.