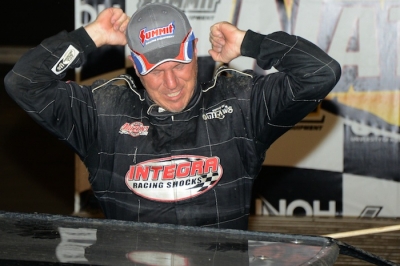 BARBERVILLE, Fla. (Feb. 23) — In a week where he was often in the wrong place at the wrong time, Darrell Lanigan of Union, Ky., broke through Saturday at Volusia Speedway Park in the finale of the 42nd annual UNOH DIRTcar Nationals presented by Summit Racing Equipment.

Lanigan outdueled Tim McCreadie of Watertown, N.Y., then kept Josh Richards of Shinnston, W.Va., at bay in a nine-lap dash to the finish for a $10,000 victory, his first at Volusia’s half-mile oval.

Richards settled for second in the 50-lapper while McCreadie, who led laps 3-11 and again on laps 15 and 16 while battling Lanigan, settled for third. Kennedy Motorsports teammates Shane Clanton of Fayetteville, Ga., and Tim Fuller of Watertown, N.Y., rounded out the top five.

Lanigan was up front most of the week at Volusia, but his Tuesday run ended after damage in a front-running scrape with Richards and he was caught up in a turn-three mess Thursday after a Richards spin triggered a pileup. In between, McCreadie edged him by a fraction of a second Wednesday for a 40-lap victory.

On Saturday, Lanigan went to work from the fifth starting spot and was quickly up to third. He went underneath McCreadie on the 12th lap in turn two to take command, and after McCreadie briefly slipped ahead again on lap 15, Lanigan regained the lead on lap 17 inside turn three and led the rest of the way.

Not that it was easy. Lanigan had his hands full with McCreadie for the next 20 laps, then the 12th-starting Richards took over the second spot and began applying pressure. With the last of four caution flags waving on lap 41, fans were itching for a showdown between Lanigan and Richards, long-time traveling mates turned apparent rivals during the week with Lanigan vacating his customary pit stall alongside the Rocket Chassis house car team of Richards.

While Richards made a few challenges at Lanigan, he couldn’t keep up in the final laps as Lanigan continually beat Richards and everyone off turn two in stretching his margin. He took the checkers by nearly a full second ahead of Richards.

All the yellow flags were for slowing cars: Scott Bloomquist on lap 19, Clint Smith on lap 25, Bobby Pierce on lap 27 and fifth-running Stormy Scott on lap 41. The pole-starting Scott led the first two laps and hung with the frontrunners before his departure.

Outside front-row starter Shane Clanton raced to victory in a heat where everyone's eyes were on fueding drivers Darrell Lanigan and Josh Richards. The polesitting Lanigan and Richards had a tight battle for the second spot early in the 10-lapper before Richards edged away. But on a one-lap dash to the checkers, Lanigan slid past Richards in turn four to get the second spot. Richards was third and Bub McCool, who appeared to briefly lose power on lap seven in turn one, managed to hold on to the final transfer spot over Dennis Erb Jr. Fifth-starting Eddie Carrier Jr. was in contention for a transfer spot on the first lap, but slipped way out of the high groove in turn four and fell back. The heat's lone caution appeared on the eighth lap when Tyler Reddick spun in turn three and a late-arriving Jerry Lierly caught a piece of him. Both rolled away while Lierly had a flat right-rear tire and heavy rear body damage.

Rookie Stormy Scott got the jump from outside the front row and raced to victory over Brady Smith, who took the second spot from polesitter Kenny Pettyjohn on lap four. Seventh-starting Shannon Babb got rolling in the high groove midway through the race and rallied to finish third, while Wells took the fourth and final transfer spot from Steve Francis on the last lap. Pettyjohn faded to finish seventh. A second-lap caution appeared when Morgan Bagley, Casey Roberts and Chub Frank got tangled up on the frontstretch with Chuck Julien spinning to avoid the mess. Bagley kept moving after the incident while Roberts and Frank were banged around, and Frank required a push off the track. Roberts headed to the pits.

Friday's winner Billy Moyer picked up where he left off in Saturday's prelims, racing to victory from his third starting spot. Fifth-starting Tim McCreadie chased him home in second while outside front-row starter Billy Ogles Jr. was third. Rick Eckert made a last-ditch move on polesitter Mason Zeigler exiting turn four for the checkers to get the final transfer spot.

Tim Fuller slid under polesitter Bobby Pierce to take the lead in turns three and four on the first lap and pulled away to his first heat race victory of the week. Pierce fought off fifth-starting Eric Jacobsen early and ran the low groove to second place while Jimmy Mars got third after a lap-four slide job on Jacobsen exiting turn four. Jacobsen held onto the fourth and final transfer spot over Dale McDowell.

Pettyjohn tripped the clock at 15.790 seconds on the half-mile oval and will start on the pole of the first heat race. Other heat race polesitters: Bobby Pierce of Oakwood, Ill., Mason Zeigler of Chalk Hill, Pa.; and Darrell Lanigan of Union, Ky.

The event wraps up the the busiest Georgia-Florida Speedweeks ever for the World of Outlaws with eight races over 16 days. ... The race also wraps up the busiest-ever Speedweeks for Super Late Models with 19 events overall in 16 days. ... Volusia inners earlier this week are Josh Richards of Shinnston, W.Va. (Monday and Tuesday), Tim McCreadie of Watertown, N.Y. (Wednesday), Scott Bloomquist of Mooresburg, Tenn. (Thursday) and Billy Moyer of Batesville, Ark. (Friday). ... Among drivers who won’t compete tonight are Billy Moyer Jr., Kent Robinson and Todd Frank. ... Big-block modified driver Alan Johnson departed Florida after his son-in-law was killed in a snowmobilie accident. ... After Speedweeks, the World of Outlaws takes a month-long break before a March 22-24 weekend at I-30 Speedway in Little Rock, Ark., Whynot Motorsports Park in Meridian, Miss., and Duck River Raceway Park in Wheel, Tenn. Each pay $10,000-to-win.