Moyer finally puts it all together at Speedweeks 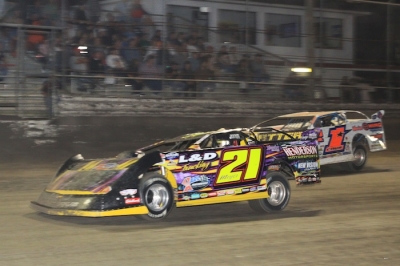 Righting a frustrating week of action at the half-mile oval, Moyer passed WoO rookie Eric Wells of Hazard, Ky., for the lead on lap 11 and never looked back. He repelled repeated late-race challenges from defending tour champion Darrell Lanigan of Union, Ky., to secure the $10,200 triumph.

“We’ve had a rough (week) down here,” said Moyer, whose forgettable outings leading up to Friday’s checkered flag included the WoO event the previous evening when he was forced out of action on lap one by a broken tie-rod. “It feels good to finally get this one under our belt.”

Moyer, 55, made the right moves in lapped traffic to put some critical space on Lanigan and crossed the finish line 1.368 seconds ahead of York, Pa.’s Rick Eckert, who slipped by Lanigan on lap 48 to earn the runner-up spot for the second consecutive night. Lanigan settled for a third-place finish after starting from the pole position, Dennis Erb Jr. of Carpentersville, Ill., started and finished fourth and Shane Clanton of Fayetteville, Ga., placed fifth for his fifth top-five run in seven WoO events this season.

The 24-year-old Wells, meanwhile, faded to a sixth-place finish after racing off the outside pole to lead laps 1-10 — one night after pacing the first 36 laps in the week’s WoO opener before settling for a tour career-best fourth-place finish — and World of Outlaws points leader Josh Richards of Shinnston, W.Va., rallied to finish seventh after stopping on the track while running fourth on lap 23 because he had run out of tearoffs and needed to stop to retrieve a new helmet.

Moyer’s 19th career victory during the UNOH DIRTcar Nationals by Summit — more than double any other driver — came after he turned back a spirited bid from Lanigan.

Lanigan, 42, swapped second place with Erb once after a lap-26 restart but secured the position on lap 29. After the race’s third and final caution flag flew on lap 29 for Bloomquist’s stopped car, Lanigan gradually ratcheted up the pressure on Moyer, catching the leader on lap 38 and using the outside lane to pull alongside Moyer several times during the ensuing circuits.

Lanigan came within inches of nosing out Moyer for the lead at the start-finish line on laps 40, 42 and 44, but Moyer hung tough in his preferred inside lane. Finally, after Moyer put the lapped car driven by Donnie Moran of Dresden, Ohio, between his Victory Circle machine and Lanigan’s Rocket on lap 46, he had the cushion to carry him to victory lane.

“I seen him out there a time or two and I heard him out there a lot,” said Moyer, who recorded his fourth career WoO win at Volusia, his 17 th on the tour since 2004 and his 39th overall on the series (including the tour’s original 1988-89 seasons). “I just was trying to run my little line there on the bottom. I moved up in the middle on the one end (turns three and four) a couple times and it didn’t feel too bad, but I kind of had the car set up a certain way where I just seemed like I was better right around the bottom.”

The victory marked the record 10th different year in which Moyer has won a Dirt Late Model feature during the 42-year history of the UNOH DIRTcar Nationals by Summit at Volusia, a track that ranks high on his list of favorites.

“I said the first day we got here (Feb. 18) after hot laps, ‘Man, we’re at a racetrack finally,’” said Moyer, whose first-ever UNOH DIRTcar Nationals by Summit win came in a STARS-sanctioned event in 1985. “We’ve been at these other ones down here in Florida (this month) and none of them come close to as racy as this place is. I’ve always liked this place. It’s a multi-groove deal.”

Eckert, 47, made a late charge to snatch second place from Lanigan. The race’s sixth starter once again came on a bit too late to grab a victory for his ailing mother back in Pennsylvania.

“We made some changes to our (Team Zero by Bloomquist) car and we were a little better, but we didn’t show it until right there at the end,” said Eckert, who started sixth. “I got to moving around on the racetrack — I was lost down there in (turns) three and four for most of the race — and finally got me a line. I wish there would’ve been 10 more laps because it was starting to get interesting.

“The last couple nights we got better as the night went on. If we make a couple more changes tomorrow night, then maybe I can get going on lap 35 and be able to get to the lead before the end of the race.”

Lanigan, who entered Friday’s program after putting in many man-hours overnight and during the afternoon to repair his car that was damaged significantly in a Tuesday-night crash at Volusia, couldn’t quite summon the speed to overtake Moyer.

“I just got to running that middle there and burned my tires up a little bit,” said Lanigan. “We had a good run there though. It was fun to run side-by-side (with Moyer).”

Finishing in positions 8-10 were Tim McCreadie of Watertown, N.Y., who started 25th after using a provisional to gain entry to the A-Main field; Steve Francis of Ashland, Ky.; and Brady Smith of Solon Springs, Wis.

The DIRTcar Nationals conclude Saturday with another $10,000-to-win World of Outlaws event, along with big-block modifieds. Race time is 7:30 p.m.