Moyer fights off Lanigan for 19th win at Volusia 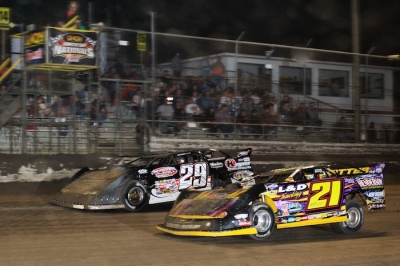 BARBERVILLE, Fla. (Feb. 22) — Hall of Famer Billy Moyer of Batesville, Ark., was 24 hours away from going winless at Georgia-Florida Speedweeks for the first time since 2007. He took care of that Friday night at Volusia Speedway Parks 42nd annual UNOH DIRTcar Nationals presented by Summit Racing Equipment, capturing a World of Outlaws Late Model Series victory worth $10,000

The winningest driver in DIRTcar Nationals history overtook Eric Wells of Hazard, Ky., with a backstretch pass on the 11th lap, then fought off a stiff challenge from polesitter Darrell Lanigan of Union, Ky., for his 19th career winter victory at Volusia.

The third-starting Moyer looked strong by steadily sticking with the low groove through the middle stages of the 50-lapper, but Lanigan jumped into the high groove and got side-by-side with Moyer several times — just a hundredth of a second behind on lap 44.

Moyer cleared a lapped car in the final laps and stretched away from Lanigan, who gave up the second spot to sixth-starting Rick Eckert of York, Pa., on lap 48. Lanigan was third with Dennis Erb Jr. of Carpentersville, Ill., and Shane Clanton of Fayetteville, Ga.

The feature was slowed by three cautions, all for single-car slowdowns. Josh Richards gave up fourth spot on lap 23, Eric Jacobsen slowed on lap 26 and Scott Bloomquist stopped in turns three and four on lap 29. Richards, who swapped helmets before rejoining the tail of the field, rallied back to finish seventh.

The DIRTcar Nationals wrap up Saturday with another World of Outlaws and big-block modified program. Racing is scheduled for 7:30 p.m.

Polesitter Josh Richards slipped under Shannon Babb midway through the 10-lapper and raced to victory in the caution-free prelim. Babb, who slipped too high in turn two a few times, lost the second spot to Rick Eckert on the eighth lap and settled for third. Dale McDowell was a distant fourth for the final transfer spot.

Polesitter Billy Moyer fought off several challenges from fellow front-row starter Darrell Lanigan for the victory. Lanigan nearly pulled alongside twice — exiting turn four, and then exiting turn two — but the higher-running Moyer fought him off both times. When the frontrunners went by the slower Chuck Julien, that gave Moyer a little breathing room in the closing laps. Scott James as third, a straightaway behind the first two while Billy Ogle Jr. for the final transfer spot. Mason Zeigler survived frontstretch collision with Jimmy Mars complete the first lap after his car nearly got sideways.

Scott Bloomquist got a great jump and cruised to a 10-lap victory while third-starting Shane Clanton chased him all the way. Bloomquist took the checkers by more than a half-straightaway while Clanton was nearly a straightaway ahead of third-finishing Steve Francis, who gained two spots. Ricky Weiss was a close fourth with the final transfer spot from his seventh starting spot. Outside front-row starter Dillon Wood ran third early but pulled into the pits on the third lap.

Polesitter Eric Wells edged away from a first-lap duel with fellow front-row starter Dennis Erb Jr. and raced to a victory in the opening heat. Erb was uncontested in finishing second while fifth-startin Eric Jacobsen and Brady Smith got the final two transfer spots. Casey Roberts was fifth in the caution-free prelim and will start on the pole of a consolation race.

The 24-year-old Wells turned a lap of 16.164 seocnds seconds at the half-mile oval and will start on the pole of the first heat race in Friday’s action. Other heat race polesitters: Scott Bloomquist of Mooresburg, Tenn.; Billy Moyer of Batesville, Ark.; and Josh Richards of Shinnston, W.Va.

Previous Late Models winners in the week are Josh Richards, who won two UMP DIRTcar events Monday and Tuesday, along with Tim McCreadie of Watertown, N.Y. (Wednesday in UMP DIRTcar action) and Scott Bloomquist of Mooresburg, Tenn. (WoO’s Thursday opener). ... The weather is gorgeous with temperatures in the 80s and no chance of rain. ... The World of Outlaws are continuing experimenting with a new time trial format splitting the field into two groups (similar to the Lucas Oil Late Model Dirt Series); the first group sends drivers to the first two heats while the second group sends drivers to heats three and four. ... There’s scuttlebutt in the pits after reigning WoO champion Darrell Lanigan’s hauler left the grounds and returned early this afternoon. Instead of parking next to his regular travelingmate Richards, where he’d been the first four days, Lanigan pitted on the lower-level Gator Pond pits. Lanigan and Richards had a scrape in Tuesday’s feature, and then Lanigan expressed his displeasure with Richards’s part in Thursday’s lap-31 pileup that damaged several car, including Lanigan’s. ... Lanigan is scheduled to receive his 2012 championship ring at a ceremony before tonight’s racing action. ... Jimmy Owens, whose car was carried away by a pair of tow trucks, called it a week and headed back to Tennessee. ... Friday's Bulrush Dash for non-qualifers’ has been cancelled. Thursday’s dashes for non-qualifiers and the Six Pack Dash were combined into a single dash won by Don O’Neal. ... O’Neal’s reward, in part, was six bottles of Budweiser, but he made light of the fact that his Moring Motorsports machine missed the main event. “When that beer was on the line, though, we stepped up, didn’t we?” O’Neal cracked. ... O’Neal’s son Hudson is in action during Florida Speedways in the Pro Truck division at the paved New Smyrna Speedway. ... Kevin Rumley, chief engineer for Longhorn Chassis and Bobby Labonte Racing, flew down late Friday to help driver Earl Pearson Jr. The team is still working on a brand new CAD-designed piece that “was a blank computer screen at Thanksgiving,” Rumley said. “We don’t have any standard setups yet,” he added, so the team is working to “validate some setups and learn about what it takes.” ... Stormy Scott is piloting car owner Bryan Rowland’s No. 20r after having problems in his No. 2s in Thursday’s prelims.