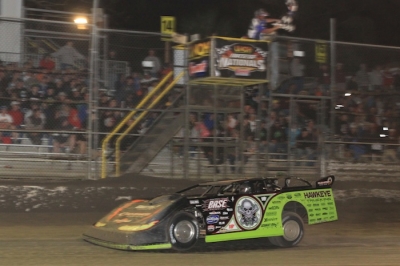 The Dirt Late Model Hall of Famer from Mooresburg, Tenn., then proved it in the 50-lapper, charging by race-long pacesetter Eric Wells of Hazard, Ky., for the lead on lap 37 and pulling away to win the first WoO LMS event of the mid-winter motorsports extravaganza outside Daytona Beach.

Bloomquist, 49, raced unchallenged once in front, crossing the finish line 3.260 seconds ahead of York, Pa.’s Rick Eckert. Eckert slid by Wells for the runner-up spot on lap 48, and moments later Shane Clanton of Fayetteville, Ga., passed Wells to secure a third-place finish.

The 24-year-old Wells, who is chasing the 2013 WoO Rookie of the Year award, settled for a career-best tour finish of fourth after starting from the outside pole and leading laps 1-36. Josh Richards of Shinnston, W.Va., completed the top five, salvaging a fifth-place finish after starting 22nd, climbing as high as fourth and then restarting at the rear after his involvement in a multicar tangle on lap 31 forced him to pit.

Bloomquist’s $10,200 triumph was the ninth of his career during the UNOH DIRTcar Nationals by Summit, moving him into sole possession of second place on the event’s alltime win list behind Billy Moyer of Batesville, Ark., an 18-time DIRTcar Nationals winner who started third but retired after one lap due to a broken right-front tie-rod.

“I felt pretty confident we had something for ‘em,” Bloomquist said of his mindset entering the evening’s headliner. “The car was just awesome. (It) was wrecked really bad last night on both ends, but we worked all night, fixed this thing and got it right.”

Bloomquist, who started seventh in his self-built Roush Yates-powered car, navigated forward to second place by lap 10. He lost the spot to Eckert on a lap-30 restart, but another caution flag one circuit later — and a subsequent open red-flag situation called by WoO officials that lap to allow crews to replenish their drivers’ helmet tear-offs and scrape mud off their cars — played a pivotal role in propelling Bloomquist to victory.

“There’s so much to having clean air here, and (after falling to third) I had Eric (Wells) and (Eckert) in front of me and my car felt different,” said Bloomquist. “So we got another caution, and (Eckert) chose the bottom (for the restart) and I had the opportunity to blow the top off to get a good restart.

“I knew it was just now-or-never and just went for it. I just committed to going to the outside and just going for broke. The car was awesome and it stuck.”

Bloomquist blasted off the outside of turn four to vault past Wells, who runs a car built by Bloomquist, for the lead on lap 37. After completing his march to victory shortly thereafter, he couldn’t help smiling about his 26th career WoO victory.

“Actually,” said Bloomquist, “that’s about the most fun I’ve had racing in years.”

Bloomquist also hailed the performance of his young customer Wells, who made a strong bid for his first-ever WoO LMS victory.

“He went a little softer on tires than Rick and I did and I think they may have given up a little bit right there at the end,” Bloomquist said of Wells. “But he had a heck of a run going. I was impressed. He’s running for Rookie of the Year with the World of Outlaws this year and I think he’s gonna have a good showing.”

Wells showed some disappointment after falling short, but he took a big step in his development.

“It’s hard to beat the teacher,” Wells said of Bloomquist. “We keep trying. Maybe one day we’ll get him.

“I think the red flag hurt me,” he added. “My tires were kind of glazed over, and I think that gave them (Bloomquist, Eckert and Clanton) time to cool their stuff down. I might have got out of rhythm too — I don’t know. We ended up fourth, that’s all I know. That’s just how it ended.”

“A couple times on restarts I snuck back by him, but he was just smart enough after that red flag to go up where that loose stuff was laying and run through it,” said Eckert, who campaigns car built by Bloomquist. “He just moved up in the middle, and it got to where that lane I was in (on the inside) was so polished up that it bled back and got greasy. I was down there messing around too long in that grease – and then I think Eric moved down there and that didn’t help him either.”

Eckert was highly motivated to reach victory lane. He was hoping to dedicate a win to his ailing mother, who was unable to make her annual trip to Volusia because health concerns would not allow it.

“I wanted to win that race bad for her,” said Eckert. “We might’ve had a shot if that red didn’t come out, but it’s over and we’ll try to get her one tomorrow.”

The race was slowed by five caution flags plus the open red-flag condition, which came shortly after the only major incident of the event.

On lap 31 Richards slid sideways in turn three while battling Clanton for fourth, settling off a wild melee. Dale McDowell of Chickamauga, Ga., clipped Richards’s car and veered to the outside wall, where his machine was slammed by Jimmy Owens of Newport, Tenn., whose car bounced in the air and nearly flipped. Other drivers involved were Darrell Lanigan of Union, Ky., Scott James of Bright, Ind., Mason Zeigler of Chalk Hill, Pa., and Tyler Reddick of DuQuoin, Ill.

While Richards was able to return after pitting for some repairs, the others weren’t as fortunate. Owens likely got the worst of the crash — his car was towed off dangling between two wreckers — while Lanigan was forced to retire with heavy right-side damage.

Caution flags were also brought out by Moyer, who stopped on the track on lap one because he couldn’t cleanly steer his handicapped car into the infield; Vic Coffey of Caledonia, N.Y., who slowed with engine problems on lap 10 after running as high as second; Morgan Bagley of Longview, Texas (lap 26); and Tim Fuller of Watertown, N.Y. (lap 30).

Finishing in positions 6-10 were Dennis Erb Jr. of Carpentersville, Ill., who started from the pole position; Jimmy Mars of Menomonie, Wis.; 20th-starter Tim McCreadie of Watertown, N.Y., who was marginally involved in the lap-31 tangle but was able to continue; Bub McCool of Vicksburg, Miss., who started 28th after using a WoO LMS emergency provisional; and 16-year-old Bobby Pierce of Oakwood, Ill.

Action continues Friday at Volusia with WoO programs headlined by 50-lap features. The Super DIRTcar Series for big-block modifieds will also be part of both shows. Race time is 7:30 p.m. both nights.