Bloomquist gets $10,000 WoO victory at Volusia 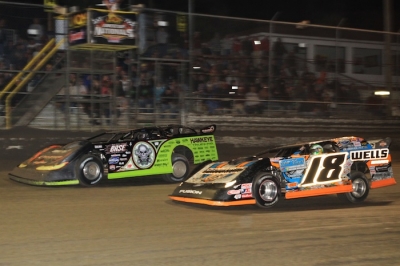 Bloomquist, who quickly pulled away from his pursuers to win by a straightaway margin, earned $10,000 for his 26th career World of Outlaws victory and fourth DIRTcar Nationals victory over the past three years.

Rick Eckert of York, Pa., and Shane Clanton of Fayetteville, Ga., slipped by Wells in the closing laps for the second and third spots, while Josh Richards of Shinnston, W.Va. — whose turn-two spin while battling with Clanton for fifth triggered a turn-three melee on lap 31 — rallied to round out the top five.

While Wells had a big lead early, his chassis builder Bloomquist and Eckert had caught him just after the race’s midpoint before the sixth and final caution for the mess in turn three.

The 22nd-starting Richards, a two-race winner this week at Volusia, spun in turn three while dueling with Clanton, setting off a lap-31 pileup that involved more than a half-dozen cars. Dale McDowell’s car slid under Richards and Tim McCreadie caught a piece of Richards. McDowell’s car was sent toward the outside guardrail where Jimmy Owens piled into the mess along with Darrell Lanigan, Scott James and Tyler Reddick.

The lengthy cleanup required two wreckers to remove the heavily-damaged Owens machine while McDowell’s mud-covered car also suffered significant damage. During the cleanup, officials called for a red flag, allowing teams to provide tear-offs to drivers and clean mud off the front of the cars and 16 of 28 starters returned for the restart.

DIRTcar Nationals action continues Friday with another $10,000-to-win event with the World of Outlaws. The six-race stretch concludes with a $10,000-to-win finale Saturday. Hot laps are scheduled for 6 p.m. each night.

Billy Moyer became the first non-polesitting heat winner, slipping past polesitter and race-long leader Shane Clanton just before the checkers in leading only the last lap. Jimmy Mars slipped by Clanton's teammate Tim Fuller on the sixth lap to take the third spot while Fuller was the fourth and final transferring driver. The first start was scrapped when Chad Hollenback and Justin Rattliff tangled in turn four; Eric Jacobsen took evasive action by heading out the opening in the outside wall before returning to the track with no apparent issues. A lap-three caution appeared when WoO points leader Josh Richards spun in turn two.

Polesitter Scott Bloomquist got the jump on fellow front-row starter Vic Coffey and cruised to victory in the third heat. Coffey lost the second spot to Jimmy Owens on a lap-three restart, but fought back to regain the spot in the final laps. Coffey ended up third and Tyler Reddick got the fourth transfer spot. The lone caution appeared on the third lap when Dillon Wood slowed; during the yellow-flag period he banged against the car of Steve Francis before officials sent him off the track. Bloomquist's win gave Bloomquist Race Cars victories in the first three heats.

Dennis Erb Jr. was the second straight polesitter to grab a heat win, beat, Bobby pierce and Billy Ogle Jr. to the checkers. All three transfer along with Pat Doar. Stormy Scott slowed on the ninth lap to draw a yellow.

Bloomquist tripped the clock at 15.997 seconds at the half-mile oval and will start on the pole of othe third heat race, part of the preliminaries before the night’s $10,000-to-win main event. Other heat race polesitters: Eric Wells of Hazard, Ky.; Dennis Erb Jr. of Carpentersville, Ill.; and Shane Clanton of Fayetteville, Ga.

The top four finishers of four heat races and top four from each of two consolation races transfer to the 26-car mian event.

The World of Outlaws experimented with split qualifying groups similar to the Lucas Oil Late Model Dirt Series. The 53 entries were split into 27- and 26-car groups with the first group setting lineups for the first two heat races and the second group aligning the third and fourth heats. The format remains the same from that point with top two finishers in each heat advancing to redraw to set the first four rows of the main event.

The series plans to experiment with the format each of the next three nights.

Besides the Late Models, Super DIRTcar Series big-block modifieds are scheduled for a complete program capped by a 30-lap feature. After the night’s main events, two Late Model dashes are also scheduled, the Six Pack Dash among drivers voted by fans and the Bulrush Dash for non-qualifiers.

Two-time champion Josh Richards, Sunday’s winner at Bubba Raceway Park in Ocala, Fla., leads WoO points heading into the sixth series event. Richards and Lanigan each have two victories in the first five events. ... Clint Smith hit the turn-three wall on his second qualifying; he drove the car to the pits with right-side damage. ... Dan Stone had a flat tire and didn’t qualify. ... Ron Davies broke a j-bar and scratched for the night. ... Darrell Lanigan’s team had to replace a starter before time trials. ... Stormy Scott’s car owner Bryan Rowland of Woodward, Okla., is the only newcoming Late Model entrant of the week. ... Vic Coffey was among drivers making engine swaps for tonight’s action. ... Big-block modifieds are set to run four heat races and two consolations before a 30-lap feature. ... It was announced today that Volusia will have some competition at next year’s Thursday night show. Nearby Daytona International Speedway’s Budweiser Duel, NASCAR’s 150-mile qualifiers for the Daytona 500, will be run in the evening in 2014. The races have traditionally been held early in the afternoon, allowing Volusia to attract fans who have left the big track.