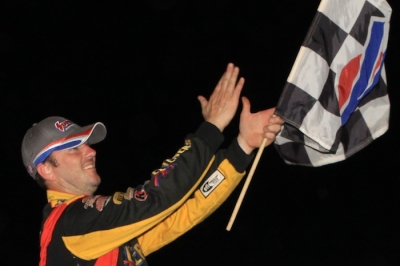 Tim McCreadie applauds the crowd after his $10,000 victory. (stlracingphotos.com)

Racing at the half-mile oval where he won his first Dirt Late Model feature in 2004, McCreadie outdueled Darrell Lanigan of Union, Ky., for the lead on lap 29 and then hung on for dear life, ultimately nipping Lanigan and Billy Moyer of Batesville, Ark., in a thrilling three-car finish to the week’s third Late Model event.

McCreadie, 38, flashed under the checkered flag just 0.062 of a second ahead of Lanigan, who swapped the lead three times with his fellow World of Outlaws Late Model Series regular. Third-place Moyer was also part of the photo finish, just 0.119 of a second behind Lanigan.

Ninth-starting Dale McDowell of Chickamauga, Ga., finished fourth in his first appearance of the week and Don O’Neal of Martinsville, Ind., started and finished fifth.

Josh Richards of Shinnston, W.Va., who won the first two features of the week, saw his streak end without even officially completing a lap in the feature. He started 22nd after qualifying through a consolation race and was knocked out of the race in a multi-car frontstretch tangle, leaving him with a 24th-place finish.

McCreadie’s $10,000 triumph was the fifth of his career at Volusia but first since he captured the WoO finale of the 2005 racing extravaganza. He won three of the six dirt Late Model features contested that year.

“It’s been since ’05 since I thought that we were a threat (at Volusia),” said McCreadie, whose career-first Dirt Late Model win on Feb. 9, 2004, came at Volusia. “Tonight kind of felt like that (year).”

McCreadie demonstrated that he was ready to snap his victory drought at Volusia in Tuesday night’s feature when he sailed by Lanigan for the lead on lap two. His bid ended three circuits later when he jumped the cushion in turn two and slapped the guardrail, but even after retiring he remained upbeat about the performance of his Sweeteners Plus Warrior car.

Starting third in Wednesday’s headliner, McCreadie gained control of second from his teammate Vic Coffey of Caledonia, N.Y., on lap five and used the outside groove to overtake race-long pacesetter Lanigan for the top spot on lap 14. He ceded the lead back to Lanigan on lap 23 and fell nearly two seconds behind within four circuits, but a caution flag on lap 28 for Coffey, who stopped with terminal engine trouble, put McCreadie back in the game.

On the restart McCreadie immediately went to the outside of the track and drove into turn three side-by-side with Lanigan. He rocketed off turn four to regain command as lap 29 was scored.

“(During) the cautions we had got the crumbs packed in on the outside and (following the restart) you could really ring the outside for four or five laps,” McCreadie said. “But once it throws crumbs there (again), you can’t steer good enough and you’re just not hooked up good enough like the bottom was. I stayed out there too long the first time (after taking the lead), and then when (Lanigan) passed me I just kind of tried to follow him.

“I couldn’t really run with him at that point. Then the yellow come out (on lap 28) and it was long enough to get the moisture packed in. I figured (Lanigan would) go to the top (on the restart), but he just happened to go to the bottom (entering turn three).

“I had nothing to lose,” he continued. “We’ve had a better start than we’ve ever had in the past three four years down here, but it isn’t winning, so I just gave it a shot.”

The race was far from over, however. Over the last five laps Lanigan and Moyer alternated diving underneath McCreadie, who found himself needing to hold off both standout drivers rounding turns three and four on the final circuit.

“You don’t know where everybody is, but you can tell by the looks in (signaling crewmen’s) eyes when they’re waving (their arms) that fast that they think you’re in trouble,” said McCreadie, describing the deciding laps. “I was kind of scared, so I figured my best shot, because Lanigan had been running the bottom, was to cover the bottom and roll the middle just because I could keep my momentum up.

“Then I saw on the board that Moyer had got to second and he’s usually good in the hub there too, so I just figured, ‘Try to be smooth and cover most of the lanes, and if they beat you, they beat you.’

“We got lucky,” he concluded. “I kind of slipped up in (turns) three and four both of them almost went by me. The finish line — thank God it was where it was at instead of 10 foot further down the track.”

Lanigan, 42, graciously congratulated McCreadie after settling for runner-up money. He tossed his car around the extreme outside of turns three and four on the last lap but couldn’t beat McCreadie to the finish line.

“We were just awful tight there in the middle of the race and couldn’t turn,” said Lanigan, who led laps 1-13 and 23-28 after starting from the outside pole in his Rocket machine. “We had a shot there at the end to just wing it around the top and I went for it, but we came up a little bit short.”

Moyer, 55, was awestruck by the race’s exciting finish. He advanced from the seventh starting spot to place a week-best third in his Victory Circle car.

“The people in the stands had to love that — we did, too,” said Moyer, the winningest driver in DIRTcar Nationals history. “It was awful close. I don’t know if I remember one with the top three that close.

“There was a little strip right there (on the bottom of the track) and when I hit it just right I could really go through there, but I couldn’t hit it right every lap. And that last lap I was thinking, I gotta do it, gotta do it, and I missed it just a little bit.”

Finishing in positions 6-10 were Earl Pearson Jr. of Jacksonville, Fla., who climbed as high as third; 14th-starter Shane Clanton of Fayetteville, Ga.; 18th-starter Steve Francis of Ashland, Ky.; fourth-starter Casey Roberts of Toccoa, Ga.; and 15th-starter Jimmy Owens of Newport, Tenn., who made his first start of the week.

Outside front-row starter Casey Roberts built a huge lead and cruised to victory in the final heat. Roberts took the checkers more than a straightaway ahead of Eric Jacobsen, whoe edged Steve Francis for the second spot. All three transferred. Mike Benedum lost power during the parade lap, while fourth-starting Rick Eckert showed smoke just after the start and pulled to the outer pits exiting turn two.

Earl Pearson Jr. emerged from a three-car duel with polesitter Mason Zeigler and Jimmy Owens to grab an eight-lap victory. Pearson and Zeigler pulled away from the field midway through the race, while Owens wrapped up the third and final transfer spot without a challenge. Bub McCool was a distant fourth.

While the field got slightly bottled up in a frontstretch scramble, outside front row starter Tim McCreadie took advantage and slipped away to a victory. Fellow Warrior Race Cars driver Scott James reined in McCreadie late in finishing second while Jimmy Mars got the third and final transfer spot. Stacy Boles was fourth and polesitter Jerry Lierly, who got a little out of shape when the green flew, dropped out after five laps.

Vic Coffey won a race-long duel with fast qualifier Dale McDowell and edged away to capture the third heat, a caution-free eight-lapper. The top two finished just ahead of a sixth-starting Brady Smith, who made up ground early to grab the third and final transfer spot while slowing tracking down the leaders. Smith got a late challenge from Shannon Babb, who fell just shy of transferring. Polesitter Kenny Pettyjohn was fifth.

Darrell Lanigan led all the way from outside the front row to capture the second heat. He kept second-finishing polesitter Dennis Erb Jr. in check all eight laps in taking the checkers Shane Clanton took the third and final transfer spot with a turn-four slide job on Eddie Carrier Jr. exiting turn four. Carrier couldn't answer and settled for fourth and a spot in a consolation race. Erb made his first feature of the week without the help of a provisional starting spot. Scott Bloomquist finished a lackluster sixth.

Deinied a possible victory last night by fuel pump problems, Don O'Neal picked up where he left off by cruising to a victory in the first eight-lap heat. O'Neal took the checkers ahead of fourth-starting Billy Moyer while polesitter Tyler Reddick got the last transfer spot. Josh Richards, winner of Monday and Tuesday's features, will be running a consolation tonight after finishing sixth. Chad Hollenbeck and Dan Stone were early retirees.

Josh Richards of Shinnston, W.Va., is going for his third straight victory at Volusia — and fourth overall — at the half-mile oval after winning Tuesday and Wednesday’s events.

Late Models will run six heat races, three consolations, the 30-lap main event and a Bulrush Dash for non-qualifiers. There are 38 big-block modifieds in action; they will run four heats, two consolations and a 30-lap feature.

Several newcoming Late Model drivers are in action at Volusia including Jimmy Owens of Newport, Tenn., Rick Eckert of York, Pa., and Dillon Wood of New Smyrna Beach, Fla. ... Tyler Reddick of Corning, Calif., fresh off competing in K&N Series action at Daytona, is also at Volusia. ... Darrell Lanigan plans to race the 1-race-old car he won with earlier in Speedweeks at North Florida Speedway. ... David Wells said his son Eric is a more focused racer this season, in part because he’s now the father of 7-month-old Nila. “That little girl coming along makes thing different,” the elder Wells said.