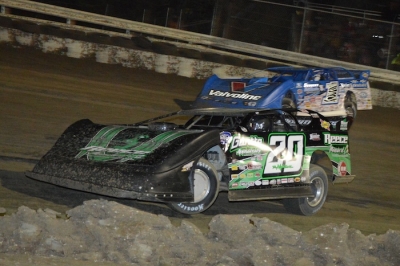 Starting third in the 75-lapper, Richards overtook polesitter Jimmy Owens of Newport, Tenn., on the 18th lap and wasn’t challenged the rest of the way in collecting a $20,000 payday, the richest of Florida Speedweeks.

Richards had a few tense moments amid lapped traffic with 15 laps remaining, but he edged back away from Scott James of Lawrenceburg, Ind., and took the checkers after posting third- and fourth-place finishes Friday and Saturday. The 11th-starting James finished a straightaway behind in second while Don O’Neal of Martinsville, Ind., was another half-straight back in third. Rick Eckert of York, Pa., and 16th-starting Chub Frank of Bear Lake, Pa., rounded out the top five at the 3/8-mile tri-oval.

Owens faded badly in the second half of the race in finishing 11th. Darrell Lanigan, who won Friday and Saturday’s World of Outlaws events to total $17,000, was never in contention and finished a lap down in 13th.

The feature was slowed by four cautions, all for single-car incidents. Mike Marlar blew a right rear while he was running second on lap 26 and Steve Francis slowed with a left-rear flat two laps later. Casey Roberts slowed on lap 35 and Dillon Wood was off the pace on lap 48.

Notes: Richards drives the Rocket Chassis house car sponsored by Seubert Calf Ranches and Ernie D's Enterprises. ... Richards has 41 career World of Outlaws victory, second to Darrell Lanigan's 43. ... Four No. 1 cars were competing all finished among the top five (only Rick Eckert's No. 24 broke it up). ... The race ended just before 8:30 p.m. ... A dozen drivers finished on the lead lap. ... Clint Smith ran in the top five early but retired on lap 28. ... Mike Marlar, Saturday's runner-up, changed his flat tire on the 26th lap but dropped out when he went a lap down on lap 45. ... Fast qualifier Mason Zeigler was never a factor and finished a lap down in 15th.

The main event should start about 8 p.m. EST. ... Jimmy Owens and Rick Eckert drew front-row starting spots for the 75-lap main event. ... Kent Robinson switched to his backup car after breaking a rear end in his heat race, but he failed to transfer to the main event through prelims. He took an emergency provisional. ... Tim Fuller and Dillon Wood received WoO provisionals. ... The track added Mark Whitener as a starter for the main event, but he wasn't able to go.

Casey Roberts, inheriting the pole position because of a scratch, cruised to a 10-lap victory in the Keyser Mfg. Last-Chance Showdown. He'll be the only driver to transfer to the main event.

Front-row starters Pat Doar and Brandon Sheppard held the top two spots all 12 laps in the second consolation. Ron Davies got the third and final transfer spot, benefitting from a back-and-fourth battle between Mark Whitener and Mike Benedum for the fifth spot. Home-state driver Tyler Ivey contended for the third spot early but he got too high more than once in fading from contention.

Polesitter Jimmy Owens cruised to an early victory over fellow front-row starter Rick Eckert for a victory in the final heat. Owens had a half-straightaway margin by halfway and was never challenged in taking the checkers. Eckert was a solid second while fifth-starting Steve Francis, who reached that position on the first lap, was third ahead of Chub Frank. Sonny Conley looked good in the early laps but faded. The lone caution appeared on the seventh lap when Kent Robinson stalled while trying to get into the infield near turn three.

Polesitter Josh Richards cruised to his third heat race victory in as many nights, grabbing the 10-lap victory. Outside front-row starter Mike Marlar slipped back to fourth early, but capitalized on mistakes by Scott James and then Billy Moyer to move back to second on the sixth lap. The sixth-starting James, who came alive early to grab the second spot but got crossed up briefly on the frontstretch before the halfway point, slipping back to fourth before regaining the third spot from Billy Moyer on the final lap. No yellows slowed the action.

Polesitter Darrell Lanigan won a tight duel with fellow front-row starter Shane Clanton in the caution-free second heat. Clanton slipped ahead exiting turn four on the first lap, but Lanigan went back out front with a frontstretch move on the sixth lap when Clanton got too high exiting turn four. They got the top two spots while Eric Wells finished third. Tim McCreadie overtook Casey Roberts on the first lap and raced to the fourth and final transfer spot.

Polesitter Mason Zeigler raced to victory in the caution-plagued first heat, barely holding off Don O'Neal for the victory. Fifth-starting Clint Smith was third and Bub McCool got the fourth and final transfer spot. Three cautions slowed the action in the first three laps. The first start was halted when Kenny Pettyjohn spun along with Gregg Satterlee and Jonathan Davenport in turn four. A second caution appeared on the second lap when Pettyjohn slide sideways in turn one and Jonathan Davenport had nowhere to go; Pettyjohn retired while Davenport continued with right-side body damage. The third yelllow appeared when Brady Smith appeared to stall in turn four on the third lap, collecting Davenport. Ivedent Lloyd Jr. and Satterlee retired during the lap-three caution.

"It was definitely a surprise," said the 20-year-old Zeigler. "I knew we were good, but not that good. We've been good all week, but if we don't put it together in a heat race, it won't matter. I'm pretty excited."

Zeigler turned a lap of 13.948 seconds at the 3/8-mile trioval and will start on the pole of the first heat. Other heat race polesitters on a chilly Florida evening: Darrell Lanigan of Union, Ky., Josh Richards of Shinnston, W.Va., and Jimmy Owens of Newport, Tenn.

Lanigan will be gunning for his third straight victory at Ocala after capturing Friday’s $7,000 opener and winning Saturday’s $10,000 winner’s purse in dramatic fashion by slipping under Mike Marlar of Winfield, Tenn., on the 49th of 50 laps.

Sunday’s event is the richest of Florida Speedweeks for the Dirt Late Models and precedes six nights of action at Volusia Speedway in Barberville, Fla., including three WoO events.

Newcomers for Sunday’s action are Jimmy Owens of Newport, Tenn., Don O’Neal of Martinsville, Ind., and Clint Bowyer Racing teammates Steve Francis of Ashland, Ky., and Jared Landers of Batesville, Ark. ... O’Neal, who drove the MasterSbilt house car at East Bay Raceway Park last week, is piloting the Illinois-based Moring Motorsports No. 1. ... Eddie Carrier Jr. of Salt Rock, W.Va., is in the pits working on his car after a long week at East Bay but doesn’t plan on racing tonight. ... Hundreds of fans were early arrivals Sunday afternoon with many new campers filling the parking area at Ocala. ... Action was slated for a little earlier in the afternoon but pushed back to after 4:30 p.m. ... Brady Smith's car was pushed off the track after he lost power; because the starter locked up, he wasn't able to refired the car. He appeared for time trials but spun on his first lap.