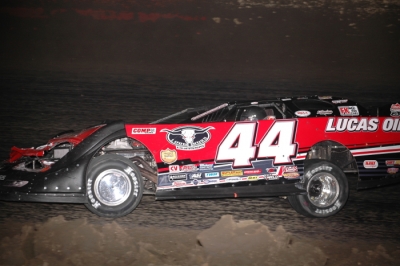 Earl Pearson Jr. heads for his first victory since 2010. (DirtonDirt.com)

Winning a race in which only five cars didn’t pit for a fresh right-rear tire, Pearson recovered from a lap-37 flat and drove around race-long leader Don O’Neal of Martinsville, Ind., as O’Neal attempted to nurse his tires to the finish. | Complete Speedweeks coverage

Scott Bloomquist of Mooresburg, Tenn., saved his rubber for the end of the race and also drove by O’Neal to score the runner-up finish. O’Neal of Martinsville, Ind., survived to finish third while Jared Landers of Batesville, Ark., was fourth also without pitting. Steve Francis of Ashland, Ky., rounded out the top five after bringing out the race’s first caution with his flat right-rear tire on lap 35.

“It’s been awful tough when you go from winning 10 races a year to struggling like we have,” said Pearson, who earned the 27th Lucas Oil Series victory of his career. “But people in all kind of sports go through it. You just gotta keep going. We did and here we are winning again down in Florida.”

After hosting Thursday's postponed Winternationals event earlier in the day Saturday, East Bay's third-mile surface might as well have been sand paper by the end of the night.

Francis was the first to go down when he slowed on lap 35, but John Blankenship of Williamson, W.Va., joined him in the pit area after his right-rear went flat under the caution.

Pearson gave up the fourth position to head to the pits under a lap-37 caution and Dennis Erb Jr. of Carpentersville, Ill., slowed from fourth on lap 43. Erb's flat set off a chain of flats as three more cautions waved for tires before another lap could be completed.

Action finally got back rolling after Eddie Carrier Jr.’s lap-43 flat, but only two more laps were logged before second-running Jimmy Owens of Newport, Tenn., Doug Drown of Wooster, Ohio, who had ran has high as second, and Bobby Pierce of Oakwood, Ill., all slowed with flat right-rear tires on lap 45.

Two more cautions waved for flats on laps 47 and 50 before the final 10 laps ran caution free. O'Neal held the lead when the green waved for the lap-50 restart, but Pearson, who had advanced back into the top five by 46, drove around him for the lead on lap 52.

Pearson never looked back from there, opening up more than a one-second advantage before the finish.

“We had a flat tire early and came in and put hard tires on,” said Pearson, who earned his third-career Winternationals victory. “I knew that was my only shot once the track dried out.”

O’Neal knew better than to fight it when Pearson went charging by for the lead. He was doing all he could to nurse his tires to the finish. That decision paid off, as the third-place finish earned O’Neal an extra $5,000 for winning the Dart Winternationals points chase.

“I knew they were on me and about to drive around,” said O’Neal, who finished the week at East Bay with five top-three finishes in six events. “I just had to ride and try to make it to the finish. We were lucky to make it. ... There’s hardly anything left on either (rear) tires. I don’t think either of ‘em could’ve made two more laps.”

Starting deep in field, Bloomquist thought he might have an advantage with the hard-compound tire choice he made before the race even started. But he knew once tires started blowing early there would be cars coming from the tail of the field.

“We felt pretty good about the tire choice we made,” said Bloomquist who was in a backup car after suffering mechanical issues in his primary machine during Saturday’s day race. “But I knew when he went in he was gonna be coming. I tried to take it easy, then at the end we ran him down a little. But once he got the lead, the hard tire deal was the key.”

Notes: Pearson's Longhorn Chassis is powered by a Rumley Racing Engine with sponsorship from Lucas Oil Products, ASI Racewear and SHY Racing Suspension. ... Jimmy Owens won Saturday's first race. ... Austin Hubbard of Seaford, Del., was scheduled to start third, but he slowed with mechanical issues during the pace laps and was pushed to the pit area. ... Nick Davis earned $1,000 for winning the night's non-qualifiers race. ... The Lucas Oil Series returns to action March 23 in the Indiana Icebreaker at Brownstown (Ind.) Speedway.

Fourth-starting Scott Bloomquist used the high side to power to the lead on lap two of the second 10-lap consy and led the remaining distance unchallenged. While Bloomquist pulled more than a straightaway advantage, Devin Moran and Justin Rattliff raced side by side for second for nearly the entire distance before tail-starting Stormy Scott ran them down in the closing laps. The high-running Ratliff pulled ahead of Moran at the white flag, making way for Scott to pull even with Moran in the final corner. Scott and Moran raced even down the home stretch with Scott claiming the final transfer spot in a photo finish. The race's only caution waved on lap three when Leon Henderson and Braden Mitchell got together exiting turn four.

Jared Landers led every lap of the first of two 10-lap consolation races, taking the win ahead of Billy Moyer Jr. Jason McBride got the third and final transfer spot after topping a side-by-side battle with Nick Davis in the closing laps. The high-running Davis appeared to have the advantage on the low-running McBride on the final lap, but he spun in the final corner, giving the spot to McBride. The race was slowed with five laps complete when Doug Blashe got into Chad Stapleton while battling for the final transfer spot and spun both drivers. Jim O'Hara spun a lap later to bring out the second caution.

Polesitter Earl Pearson Jr. survived a mid-race challenge from Doug Drown on his way to a flag-to-flag victory in the fourth and final heat race. The second-starting Drown challenged Pearson early in the race and pulled alongside the leader on lap five. But he couldn't complete the pass and settled for second as Pearson pulled away in the closing laps. Bobby Pierce was just behind Drown in third while Eric Jacobsen took the fourth and final transfer spot. Scott Bloomquist ran third early, but a lap-two miscue shuffled him back. He ended up fifth and will have to run a consolation race.

Dennis Erb Jr. got the jump on polesitter Vic Coffey and survived a one-lap dash to win the third heat. Erb pulled away from the field through the first seven laps of the race, but a caution for third-running Tyler Reddick's blown engine gave second-running Steve Francis a final shot at the leader. Francis couldn't make good of the opportunity, however, and instead gave up the second spot to seventh-starting Eddie Carrier Jr. Francis settled for third while Coffey took the fourth and final transfer spot.

Austin Hubbard cruised in the second eight-lap heat race, winning from his pole starting spot in the caution-free affair. John Blankenship was about a half-straightaway behind Hubbard in second with Donnie Moran third and David Breazeale in the fourth and final transfer spot. Outside polesitter Jared Landers got shuffled back on the race's opening lap and ended up fifth.

Polesitter Don O'Neal survived constant pressure from Jimmy Owens through the first four laps of the first eight-lap heat race and pulled away in the second half of the caution-free prelim. After running under O'Neal for the first three laps, Owens shot by O'Neal in turns one and two on lap four, but O'Neal powered back around him at the other end of the track. O'Neal pulled away through the remaining distance, forcing Owens to settled for second. Ricky Weiss finished third with Todd Frank claiming the fourth and final transfer spot.

Coffey, who finished seventh in Friday’s feature and fifth in today’s afternoon event, posted a lap of 14.417 seconds around East Bay’s third-mile oval to earn the pole for the third of four heat races coming up at the Tampa-area dirt track. Other polesitters: Don O’Neal of Martinsville, Ind.; Austin Hubbard of Seaford, Del.; and Earl Pearson Jr. of Jacksonville, Fla.

The top four finishers from each eight-lap heat race transfer to tonight’s 60-lap, $10,000-to-win main event. Two consolation races will each transfer three more drivers to the feature and the PRC Strawberry Dash will transfer one more. Two Lucas Oil Series provisional starters and the DirtonDrit.com fast-time provisional starter will round out the 26-car starting field.

With his runner-up finish in Saturday’s opener, Don O’Neal of Martinsville, Ind., took the lead from Dennis Erb Jr. of Carpentersville, Ill., in the chase for the $5,000 Dart Winternationals points title. Erb, who was running among the top five of Saturday’s opener when a flat tire relegated him to a 19th-place finish, is 50 points behind O’Neal in second. ... The program is running behind the typical East Bay schedule after officials took extra time to rework the track surface. ... Scott Bloomquist of Mooresburg, Tenn., has gone to his backup car for tonight's event. His crew reported that the switch was due to mechanical issues in his primary car.