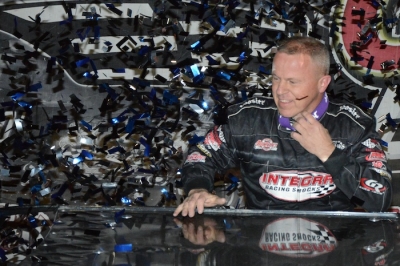 OCALA, Fla. (Feb. 16) — Regaining the lead when Mike Marlar slid high in turn four on the second-to-last lap, Darrell Lanigan of Union, Ky., made it two in a row at the World of Outlaws Late Model Series-sanctioned Bubba Army Winternationals. | Complete Speedweeks coverage

Marlar appeared to be in command in the second half of the 50-lapper as competitors mostly stuck with the low groove at Bubba Raceway Park, but when he opened the door for Lanigan, the reigning WoO champion deftly slid past and captured his series-leading 43rd career victory.

Marlar, denied a victory last February in Ocala, lost a golden opportunity for his first World of Outlaws victory and settled for second while Tim McCreadie of Watertown, N.Y., finished third. Fast qualifier Josh Richards of Shinnston, W.Va., and Shane Clanton of Fayetteville, Ga., rounded out the top five.

Polesitter Jonathan Davenport ran among the leaders early, but he skittered high in turns one and two on an early restart and fell back to 11th.

Lanigan took command at the outset with Marlar joining him for a two-car breakaway. Marlar stalked Lanigan through the early laps and got underneath him entering turn three, then beat him out of turn four to take the point on lap 11.

From that point on, it was Marlar’s race to lose as he kept Lanigan at bay. But by lap 35, the frontrunners reached the slower cars at the tail of the field and Lanigan was right on Marlar’s rear deck.

Marlar kept Lanigan in check for 13 laps, but when he got too high entering turn three on lap 49, Lanigan slid underneath without contact and led the final lap and a quarter.

The feature was slowed by four cautions, mostly for single-car incidents. The first yellow appeared on the third lap when Casey Roberts slowed and headed for the infield pits. Gregg Satterlee got out of shape in turn four on the restart and Kent Robinson stopped to avoid him.

Fifth-starting Scott James slowed on lap 17 after getting lapped and Billy Moyer stopped on lap 20.

The Bubba Army Winternationals conclude Sunday with the $20,000-to-win Super Sunday Showdown. Hot laps are scheduled for 4:30 p.m. for the richest event of Florida Speedweeks.

Dave Hess Jr. got the jump from the outside the front row and won the 10-lap race sponsored by Keyser Manufacturing. Kent Robinson finished second but fell back on a provisional starting spot. Mike Benedum and Kenny Pettyjohn finished third and fourth. Front row starters Chip Brindle and Mark Whitener scratched.

Outside front-row starter Chub Frank made the high groove work on the first lap and took command of the 12-lapper, racing to victory to transfer to the 50-lapper. Tim Fuller took the second spot from polesitter Dillon Wood on the seventh lap while Wood held off fellow home-state driver Mark Whitener for the third and final transfer spot.

Polesitter Billy Moyer won the first 12-lap consy over Bub McCool while homes-state driver Tyler Ivey got the final transfer spot. Sixth-starting Mason Zeigler spun in turn four on the first attempted start and he was pushed off the track after his car wouldn't refire. The race was run after a lengthy session of reworking the track and running it in by the consolation entrants.

Taking advantage when Brady Smith got wide on the backstretch on the first lap, Darrell Lanigan took command and quickly pulled away to an easy victory. Jonathan Davneport followed Lanigan past Smith, who held on for the third spot while Gregg Satterlee was the fourth and final transferring car. Chub Frank picked up three spots to finish fifth as the heats race caution-free for the second straight night.

Polesitter Mike Marlar cruised to an easy victory while Casey Roberts, whose folded-under nosepiece hampered in during Friday's heat race, got the runner-up spot. Marlar had a straightawy lead at halfway and was never challenged. Morgan Bagley finished just behind Roberts in third, one spot ahead of outside front-row starter Eric Wells, who had a poor start and slipped back early. Wells held off Dillon Wood as the three WoO rookie candidates — Bagley, Wells and Wood — finished in order.

Outside front-row starter Scott James cruised to a caution-free victory in the second 10-lapper, winning by nearly a half-straightaway over third-starting Shane Clanton. Polesitter Rick Eckert slipped back to finish third while Clint Smith got the fourth and final transfer spot after fellow Georgian Chip Brindle contended for the position early.

Polesitter Josh Richards cruised to victory in the first prelim, just as he did in Friday's opener. Tim McCreadie worked past Brandon Sheppard to get the second spot while Sheppard and hometown driver Ivedent Lloyd Jr. got the final transfer spots. Billy Moyer will start on the pole of a consolation race after the caution-free heat.

Richards tripped the clock at 15.046 seconds at the 3/8-mile trioval and will start on the pole of the first heat. Other heat race polesitters: Rick Eckert of York, Pa.; Mike Marlar of Winfield, Tenn.; and Brady Smith of Solon Springs, Wis.

Friday’s winner and reigning WoO champion Darrell Lanigan of Union, Ky., will be gunning for yet another victory at the 3/8-mile trioval along with top contenders Shane Clanton of Fayetteville, Ga., and Billy Moyer of Batesville, Ark., among the 38 cars.

On Friday, Darrell Lanigan overtook hometown favorite Ivedent Lloyd Jr. on the 20th of 35 laps Friday for his $7,000 victory. Saturday’s 50-lapper will be preceded by hot laps, time trials, heat races, consolation races and the Keyser Mgf. Last-Chance Showdown. ... The track surface is about one second slower than Friday as the track prep aimed to smooth and slow the track for Saturday. ... Ray Cook of Brasstown, N.C., scratched from Saturday’s action after the team found shavings in the oilpan this morning. ... Jimmy Mars of Menomonie, Wis., pulled out of the pits also. ...Friday’s fifth-place finisher Scott James spent part of Saturday afternoon adjusting the headrest on his car to give his neck a break. ... The only new addition to the action is Christian Augspurger of Palm Beach Gardens, Fla. ... Sunday’s race is a $20,000-to-win event; hot laps have been pushed back a half-hour to 4:30 p.m.