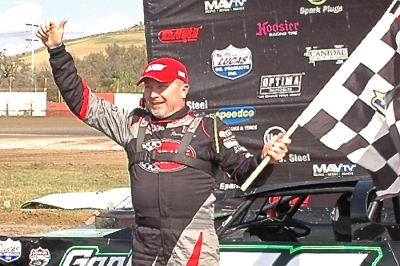 O’Neal settled for second in the event, which was the first leg of a Saturday doubleheader at the East Bay’s third-mile oval. The runner-up effort lifted O’Neal to the lead in the chase for the $5,000 payday that’s to be awarded to the highest points earner when the Tampa-area dirt track’s six-race miniseries wraps up with Saturday night’s $10,000-to-win finale.

Eric Jacobsen of Seacliff Beach, Calif., was third at the finish with John Blankenship of Williamson, W.Va., and Vic Coffey of Caledonia, N.Y., rounding out the top five finishers.

The fifth-starting Owens moved to fourth on the start of the race and later moved ahead of second-starting Dennis Erb Jr. of Carpentersville, Ill., for third before the race’s first caution waved for Erb's flat tire on lap 15.

After watching Erb run the high side for the race’s first 10 laps, Owens took his turn on the top from his outside row starting spot in the double-file restart formation and powered around both Blankenship and O’Neal in the race-winning move.

“I seen Erb running up there and I thought we were a little better than him,” said Owens, who earned his second-career Winternationals victory and his 37th Lucas Oil Series win. “Blankenship chose the inside for the restart and I thought that was good — just what we needed.”

O’Neal, looking for his second consecutive victory after recording his 15th-career Winternationals win in Friday’s race, attempted to challenge Owens on a pair of restarts in the second half of Saturday’s race, but he couldn’t keep pace with the leader. His second-place finish was his fourth top-three result in five Winternationals races this week.

Jacobsen and Blankenship both earned the second top-five finishes of the week, while Coffey posted his first top five and second top-10 run after finishing seventh in Friday night’s feature.

After initially dropping back to fourth, Erb, who entered the race leading O'Neal by 35 points in the Winternationals points chase, made things interesting in the race’s opening laps with a high side run back to the front.

With O’Neal, Blankenship and Owens all running the bottom groove, Erb powered back to second and pulled even with O’Neal exiting turn four on lap nine. But that was as close as Erb got to the lead as O’Neal pulled back ahead and Erb jumped the cushion exiting turn four three laps later.

The miscue dropped Erb to fifth and his flat right-rear tire a few laps later brought out the race’s first caution. He pitted and returned to finish 19th, but the disappointing result cost him the lead in the Winternationals points.

The race’s second caution waved one lap later for a turn-three pileup involving among others Scott Bloomquist of Mooresburg, Tenn., and Tyler Reddick of Corning, Calif. Jared Landers of Batesville, Ark., spun to bring out the race’s third caution on lap 25, and the final caution waved for Bloomquist’s flat tire with 31 laps complete.

After a break to rework the track, East Bay’s action will resume at 6 p.m. with the night’s regularly scheduled Dart Winternationals finale. The 50-lap Lucas Oil Series points race pays $10,000 to the winner.

The event is under a brief rain delay as a small line of showers moves over the racetrack. Rain began to fall just after 1:30 p.m. during the second consolation race. Due to the delay, race officials have cancelled the PRC Strawberry Dash and drew Leon Henderson's name from a hat to take the race's feature transfer. Chad Hollenbeck is the DirtonDirt.com fast-time provisional starter.

Tyler Reddick pressured polesitter Billy Moyer Jr. the entire distance and raced by Moyer when he pushed in turn two on lap eight. Rain began to fall over the track just after the field completed the lap, forcing officials to cut the race short. Moyer, Doug Blashe and Ricky Weiss joined Reddick in transferring to the main event.

Jared Landers got by David Breazeale midway through the first of two 10-lap consolation races and pulled away in the remaining distance. Scott Bloomquist also got by Breazeale to finish second, forcing Breazeale to settle for third. Jason McBride took the fourth and final transfer spot. The race was slowed with one lap complete when Chad Hollenbeck got into Devin Moran, sending Moran spinning up the front straightaway. Jim O'Hara tagged the turn-one wall while trying to avoid the incident. Moran returned the favor when he used Hollenbeck as a backstop in making a pass for fifth late in the race.

Eric Jacobsen led every lap of fourth and final heat, winning by a half-straightaway advantage over Jerry Lierly in another caution-free race. Fifth-starting Justin Rattliff rallied to third on the opening lap and held the position over sixth-starting Eddie Carrier Jr. at the finish. Carrier will join the top three in transferring to the feature lineup.

Dennis Erb Jr. topped a trio of No. 32s to score a flag-to-flag victory in the caution-free third heat. Vic Coffey was second at the finish, a half straightaway back of the leader. Coffey was followed by Bobby Pierce and Chad Stapleton in the race's other two transfer spot.

Polesitter John Blankenship cruised in the second eight-lap heat, winning by nearly a straightaway over Austin Hubbard in another caution-free prelim. Braden Mitchell moved from fifth to third on the race's opening lap and held the spot for the duration while second-starting Jason Riggs survived a near spin on the second lap to finish in the fourth and final transfer spot.

Third-starting Don O'Neal dug on the bottom on the opening lap and drove by front-row starters Steve Francis and Jimmy Owens on his way to winning the first eight-lap heat race. Owens was a distant second in the caution-free race while Francis topped a back-and forth-battle with Donnie Moran to finish third. Moran settled for fourth at the finish and will join the top three in transferring to the main event.

Needing just one lap to get it done, Jimmy Owens of Newport, Tenn., topped 33 qualifiers during time trials for the first of two Dart Winternationals events scheduled for Saturday at East Bay Raceway Park.

Owens, who elected to skip the second lap of his qualifying run, posted a lap of 15.346 seconds to earn the pole for the first of four eight-lap heat races coming up at East Bay’s third-mile oval. Other heat race polesitters: John Blankenship of Williamson, W.Va.; Dennis Erb Jr. of Carpentersville, Ill.; and Eric Jacobsen of Seacliff Beach, Calif.

Each heat race will transfer the top four finishers to the afternoon’s 35-lap, $7,000-to-win Lucas Oil Late Model Dirt Series main event. A pair of 10-lap consolation races will each transfer four more drivers to the feature while th winner of the PRC Strawberry Dash and the DirtonDirt.com fast-time provisional starter will round out the 26-car field.

Scott Bloomquist of Mooresburg, Tenn., will start from the tail of the first heat after skipping time trials. The only incidents during the session came when Braden Mitchell of Russellville, Ala., spun on his second lap and when Justin Rattliff of Campbellsville, Ky., got into the turn-two wall on his second lap.

This afternoon’s action includes two-lap time trials, four eight-lap heat races, two 10-lap consolation races, the PRC Strawberry Dash and the 35-lap main event. Each heat race will transfer the top four finishers to the main event with another four drivers transferring through each consy. The PRC Strawberry Dash will add another starter while the DirtonDirt.com fast-time provisional will round out the 26-car starting field. ... Looking for his second consecutive $5,000 Dart Winternationals points title, Dennis Erb Jr. of Carpentersville, Ill., enters the days action with a 35-point lead over Friday night winner Don O’Neal of Martinsville, Ind. Erb has yet to finish outside the top five in four events this week with a pair of victories and finishes of fourth and fifth. O’Neal has finishes of second, third and eighth to go along with his victory. ... Earl Pearson Jr. of Jacksonville, Fla., and Todd Frank of Mellen, Wis., are the only drivers in the pit area that have elected to skip the day portion of Saturday’s doubleheader. ... Scott Bloomquist of Mooresburg, Tenn., and Bob Geiger of Laurel, Del., are both signed in for the afternoon event but did not hot lap.