Lanigan's stranglehold on Ocala gives him $7,000 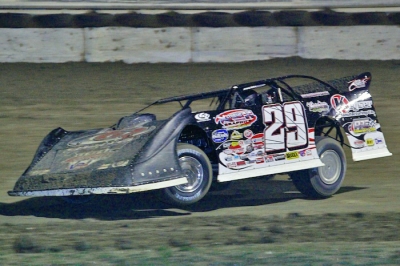 The defending tour champion outdueled home-track star Ivedent Lloyd Jr. of Ocala, Fla., for the lead on lap 20 and never looked back in his familiar Cornett-powered Rocket car. He pulled away following a deciding lap-33 restart, winning by 1.410 seconds over Tim McCreadie of Watertown, N.Y., in the Sweeteners Plus Warrior.

Josh Richards of Shinnston, W.Va., finished third in the Rocket Chassis house car after using the outside groove of the 3/8-mile, D-shaped oval to move up two spots during the green-white-checkered finish. Lloyd settled for a career-best WoO finish of fourth after leading laps 10-19 in a Snow Brothers Chassis machine, and Scott James of Bright, Ind., placed fifth in the Warrior Chassis house car.

“At this place, you definitely have to be elbows up,” said Lanigan, who set a single-season WoO win record with 15 triumphs in 2012. “It’s definitely a racy little track. I kind of like doing that, so this place fits our program pretty good.”

Lanigan demonstrated his mastery of the unique speedway by defeating one of its resident greats in Lloyd, a 46-year-old former BRP champion who knows the track’s nuances like few others. Lloyd started fifth — one spot behind Lanigan — but got to the front first, grabbing the lead on lap 10 from early pacesetter Rick Eckert of York, Pa.

Lloyd’s hometown fans began dreaming of an upset victory by a local, but Lanigan had other ideas. The WoO stalwart overtook James for second on lap 15 and five circuits later sailed around the outside of Lloyd to assume command.

While Lloyd was able to briefly close back up to Lanigan’s rear bumper on lap 30, his bid effectively ended after he slid high through turns one and two on lap 31, allowing McCreadie to snatch second. The driver who lives just miles from the track ultimately fell to fourth after the race’s final restart on lap 33.

“He came from behind us and took the lead so we definitely were concerned with him,” Lanigan said of Lloyd. “But our car was pretty good and I was just biding my time until I could get up there to him.”

Lloyd was powerless to stop Lanigan’s burst into the lead.

“He went by me pretty quick,” said Lloyd, a former Southern All Stars Series champion. “He found that outside and just drove by me. I knew there was some traction up there, but I was pretty decent on the bottom and leading the race so I couldn’t really go up there and try it.”

McCreadie, 38, attempted to use that high side in a last-ditch effort to challenge Lanigan after the lap-33 caution period but couldn’t get close enough to threaten. The former WoO champ wasn’t disappointed with a runner-up finish after struggling in the tour’s season-opening doubleheader last week at Screven Motor Speedway in Sylvania, Ga.

“I figured, Why not try (for the win)?” McCreadie, who started sixth, said of his strategy following the final restart. “I ran out there (on the outside), but I just didn’t steer good enough out there. I gave it a shot, but it’s hard down that backstretch. You lose the nose real easy, and that’s what I was headed toward so I just tried to tuck in (entering turn three). I kind of got into Ivedent a little bit when I did that and I’m sorry for that, but I’m happy we were able to hold on to second. It’s definitely better than we’ve been.”

Richards, 24, ran out of time in his bid for a second consecutive WoO victory. He started third but tumbled out of the top five early in the race, hampered by a tire-compound selection that was too hard.

“We had a pretty good hot rod, but I kind of killed us with tire choice on the left-rear,” said Richards, who took over sole possession of the WoO points lead with his third top-five finish in as many starts this season. “It took a while to get going. I wish it would’ve been 50 laps, but I’ll take the blame on that one.”

Shane Clanton of Fayetteville, Ga., who began the night tied with Richards for the WoO points lead, charged forward from the 18th starting spot to finish sixth. Mike Marlar of Winfield, Tenn., started and finished seventh; Brandon Sheppard of New Berlin, Ill., who was approved as a 2013 WoO Rookie of the Year contender prior to the evening’s action, placed eighth; Eckert faded his pole position starting spot to a ninth-place finish; and Brady Smith of Solon Springs, Wis., after climbing as high as fifth.

Four caution flags slowed the race. The first came on lap one when Tim Fuller of Watertown, N.Y., was left sitting backwards in turn one following a scrape with Mark Whitener of Middlebourne, Fla. Later, Ray Cook of Brasstown, N.C., slowed on lap 10; Fuller was swept up in a lap-13 backstretch tangle with Clint Smith of Senoia, Ga., and Chub Frank of Bear Lake, Pa.; and Bub McCool of Vicksburg, Miss., slowed on lap 33.