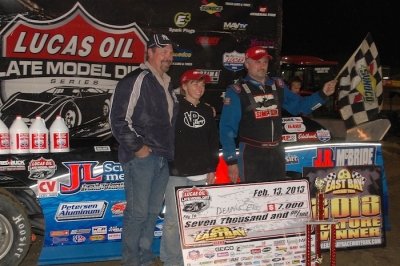 Dennis Erb Jr. picks up his second victory of the week. (DirtonDirt.com)

After turning back early challenges from third-starting Eric Jacobsen of Seacliff Beach, Calif., Erb flexed his muscle through the race’s middle portions. He was nearly a straightaway ahead of Tyler Reddick of Corning, Calif., when the rain began to fall, giving the 40-year-old Erb his second victory in the first three rounds of East Bay’s six-race Speedweeks miniseries. | Complete Speedweeks coverage

“It’s been a great start,” said Erb, who earned $5,000 for his victory in Monday’s Winternationals opener and finished fourth in Tuesday’s round-two event. “I don’t think I’ve ever had this good of a start here. I just hope we can keep it going and finish the week strong.”

Reddick advanced from his fifth starting spot to finish second while Jacobsen, Mike Marlar of Winfield, Tenn., and Jimmy Owens of Newport, Tenn., rounded out the top five in an event that was delayed more than three hours when rain showers moved over the track during preliminary action.

The night’s second round of showers cut short what Reddick was hoping would turn into a late battle for the lead. The 17-year-old former East Bay winner moved by Jacobsen on lap 23 and was counting on his choice of a harder tire compound to give him the upper hand on Erb if the race had ran the full distance.

“We were running him down a little bit; it’s just a shame that it rained,” said Reddick, who earned his third straight top-10 finish in Winternationals action. “Looking at Erb’s tire, it looks like it was going away. If we ran the whole race, I think our harder tire would have been better at the end.”

The race was slowed by five cautions with the first coming with one lap complete when Eddie Carrier Jr. of Salt Rock, W.Va., David Breazeale of Four Corners, Miss., and Ricky Weiss of St. Francois Xavier, Manitoba, were all involved in a turn-four pileup. The second yellow flag waved two laps later when Austin Hubbard of Seaford, Del., spun in turn two.

John Blankenship of Williamson, W.Va., caused the third caution on lap 11 when he spun while battling among the top 10. The fourth caution was for a lap-13 tangle between Breazeale and Braden Mitchell of Russellville, Ala., and Carrier slowed to bring out the lap-27 yellow.

East Bay hosts another $7,000-to-win event Thursday as the six-race Speedweeks miniseries reaches its fourth round. The final two events will each pay $10,000 to the winner on Friday and Saturday and are also the first two points events of the season for the Lucas Oil Series.

Notes: Erb's Bloomquist Race Car is powered by a Kuntz & Co. powerplant and sponsored by McBride Mack, JL Scrap Metals, Petersen Aluminum, Vic Hill Racing Engines and Performance Rod & Custom. ... Erb earned his fourth-career Winternationals victory of his career; all four of his Lucas Oil wins were in Winternationals action. ... A number of drivers scratched from the event after the rain delay, including Tuesday night winner Scott Bloomquist of Mooresburg, Tenn., who was scheduled to start fourth in the third heat race. ... Laurel, Del., driver Bob Geiger, the only driver to compete in every Winternationals, thrilled the East Bay crowd when he held off both Justin Rattliff and Nick Davis to finish fourth in the second consolation race and earned his first Winternationals feature start since the 1980s.

Earl Pearson Jr. shut down the powerplant in his Longhorn Chassis after it pumped all the water out of it, losing the lead in the fourth heat. It blew the radiator hose off, the team discovered as chief engineer Kevin Rumley checked over the motor in the pits. "We'll take it back home and take a look at it," said Pearson, unsure of the issues. ... Justin Rattliff broke a transmission in his Rayburn and the team pulled out his Bloomquist car for the consy. ... It turns out four-time track champion David Schmauss is driving the Keith Tincher-owned No. 23. He transferred through his heat race to his first-ever Lucas Oil event. ... The PRC Strawberry Dash was scratched from the program in the interest of time. Justin Rattliff's name was drawn from a hat, so he'll take that feature starting spot. ... Braden Mitchell, a 14-year-old Super Late Model rookie, will use the fast time provisional to start his first Winternationals feature.

Eddie Carrier Jr. got the jump on polesitter David Breazeale in the first of two 10-lap consolation races and held off Breazeale and Austin Hubbard in a race-long three-car battle for the lead. Breazeale pressured Carrier the entire distance, looking under Carrier multiple times with Hubbard just behind him. But neither challenger was able to make a pass. Breazeale and Hubbard were followed by Brandon Sheppard, who drove around Braden Mitchell midway through the race to earn the fourth and final transfer spot.

Polesitter Jimmy Owens cruised to a convincing victory in the fourth heat, winning by a comfortable margin over second-starting Bobby Pierce. Fifth-starting Dan Stone moved by Doug Drown midway through the race to finish third, forcing Drown to settle for the fourth and final transfer position. The race was slowed with five laps complete when Stormy Scott jumped the cushion exiting turn four and got into the front straightaway wall.

After being penalized a row for jumping the first two attempts to start the third heat, Mike Marlar benefitted from mechanical issues for Earl Pearson Jr. on the final lap to win the eight-lap prelim. Marlar was set to start from the pole but was penalized after race officials ruled that he fired early on both of the first two attempts to start the race and moved Pearson from third to the pole. Marlar recovered to pressure Pearson for much of the distance and raced into the lead when Pearson slowed on the final trip down the back straightaway. Donnie Moran finished second followed by John Blankenship and Keith Tincher in the other two transfer positions. Scott Bloomquist and Jared Landers were scheduled to start fourth and fifth respectively but both scratched from the event.

After nearly two hours of work to the track surface, action is set to resume with the third heat rolling out just before 10:30 p.m.

The event is under a weather delay after rain began to fall over the track just before the start of the third heat race at about 7:15 p.m. EST. The rain abated around 8 p.m. and track crews planned to begin reworking the track surface at 8:30. Getting the track back into shape could take more than an hour, according to race officials.

Polesitter Eric Jacobsen survived constant pressure from third-starting Don O'Neal to score a flag-to-flag victory in the second eight-lap heat race. The low-running O'Neal pulled alongside Jacobsen multiple times but couldn't get a strong enough run to complete the pass. He settled for second with Vic Coffey just behind the two leaders in third. Jason Riggs topped Eddie Carrier Jr. in a close battle for fourth. He'll join the top three in transferring to the main event. O'Neal got an excellent jump on the first attempt to start the race, pulling even with Jacobsen for the lead from third before a caution for Mark Whitener negated the move. The race's second caution waved when Chad Stapleton went for a spin with five laps complete.

Polesitter Dennis Erb Jr. got the jump on fellow front-row starter Steve Francis and cruised to a convincing victory in the first eight-lap prelim. Erb took the checkerds nearly a straightaway ahead of Tyler Reddick, who got by Francis early in the race after the two drivers swapped slidejobs. Francis settled for third while Billy Moyer held off David Breazeale for the fourth and final transfer spot. The race was slowed with two laps complete when Jason McBride, Doug Blashe and Jim O’Hara piled up in turn four.

Looking for his second victory of the week, Dennis Erb Jr. of Carpentersville, Ill., topped Wednesday’s round three time trials for East Bay Raceway Park’s Dart Winternationals with a lap of 14.369 seconds around the third-mile oval.

Erb, who won Monday's Winternationals opening round feature, will start from the pole of one of four eight-lap heat races coming up at East Bay. Other heat race polesitters are Eric Jacobsen of Seacliff Beach, Calif.; Mike Marlar of Winfield, Tenn.; and Jimmy Owens of Newport, Tenn.

Each heat race will transfer four cars into tonight’s 35-lap, $7,000-to-win main event. Two 10-lap consolation races will each transfer four more drivers to the feature lineup with the winner of the PRC Stawberry Dash and a fast-time provisional starter making up the remainder of the 26-car field.

Mike Marlar lost low gear on his way to the track for time trials. Because the track is in hurry up mode with rain bearing down, they won't have time to fix it. He got a push from a four-wheeler to get up to speed, and things were good from there as he was fastest in the second group. Low gear didn't work, but "high gear was good," Marlar joked.

Earl Pearson Jr. of Jacksonville, Fla., is the only new entrant. Pearson is making his first start since chief engineer Kevin Rumley joined the Bobby Labonte Racing team. ... Billy Moyer’s crew chief Steve Norris and other crew members have worked on repairing his No. 21 after the Hall of Famer was caught up in a wreck with Ronny Lee Hollingsworth in Tuesday’s main event. “I told Moyer we got our Talladega wreck out of the way, now we’re ready for the Daytona wreck,” Norris said with a laugh. “It’s East Bay, you know?” ... Hollingsworth’s team is still on site after they decided against a trip to the Barry Wright Race Car shop in Cowpens, S.C., to get a new front clip on his No. 18. A crew member said they had offers — to drop their own motor into Braden Mitchell’s backup car along with an offer from Jimmy Owens to sell his Barry Wright car to Hollingsworth (it’s back in Tennessee, however) — but for now they’re sitting tight. ... Eddie Carrier Jr. of Salt Rock, W.Va., has struggled so far with 13th- and 16th-place finishes. He hopes to turn things around Wednesday. “The way the track’s been the last couple of nights hasn’t been my deal,” he said. ... Track crews burned the midnight oil working on the track, with an extra focus obviously on the troublesome spots in turn one that has upset cars pivoting through the corner. One observer said that instead of trying to fill the hole with more dirt, the track prep was focusing on easing the transition into and out of the lower spots. ... The smoke from Doug Drown's car in Tuesday's feature? The team wasn't sure last night, but when they fired the car up today for hot laps, smoke wafted out the back they discovered an oil leal at the seal of the oil filter, so they swapped filters and should be ready to go.