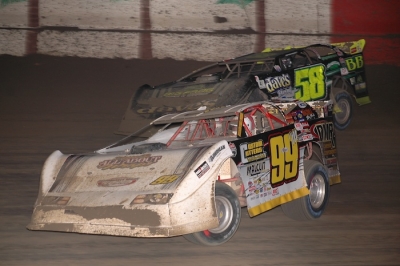 GIBSONTON, Fla. (Feb. 12) — After his 20th-to-eighth run in Monday’s Dart Winternationals opening round feature at East Bay Raceway Park, Devin Moran of Dresden, Ohio, was so excited he could hardly contain himself. In fact, it took some friendly kidding from his father Donnie, who himself finished fourth in the Florida Speedweeks event, to calm down the 18-year-old Devin.

“He was so excited when he got out of the car that he could hardly talk,” Donnie Moran said of his son’s youthful exuberance. “He said ‘Dad, this is the best I’ve ever done in this big of a race.’ I said ‘Devin, it’s 25 laps. It’s like a local show.’ I was just joking with him though, because it’s a pretty big deal. It really was great.” | Complete Speedweeks coverage

It was in fact quite an impressive performance by Devin Moran, who was making his East Bay debut in the event. Actually, just making the lineup for the $5,000-to-win Lucas Oil Late Model Dirt Series non-points race was a special achievement for the up-and-coming driver.

“I remember setting in those stands and watching tons of races,” said Moran, who has made plenty of trips to Speedweeks with his father. “When I went in that four-wide (parade lap), I thought this is one of the best feelings ever because I remember watching this so many times and now I’m in it.

“I’d be happy with a top 10 against these guys anywhere, but especially here. Everybody thinks East Bay and they think of Speedweeks and all the awesome racers that have won here.”

Moran’s impressive debut performance was just one of three strong runs by teenage drivers Monday night at East Bay’s third-mile oval. Bobby Pierce, 16, of Oakwood, Ill., and Tyler Reddick, 17, of Corning, Calif., joined Moran in finishing among the top 10 with Pierce topping the trio in fifth, just ahead of sixth-finishing Reddick.

Three teenaged drivers finishing among the top 10 of a Speedweeks event is perhaps a first-time occurrence. It’s quite possible it’s never happened in a national touring series event either. But whether the feat has previously been accomplished or not, as Pierce’s Hall-of-Fame father Bob Pierce pointed out, it speaks volumes for the sport’s future.

“To come down here and just make the show is big for almost anybody,” said Bob Pierce, who was a frequent competitor at East Bay during his own racing days. “For those young guys to come down here and run up front, that’s definitely a good sign for the future. I’ve seen what these guys can do and they’ve got it going on.”

Perhaps most impressive is the fact that crop of young drivers were successful specifically at East Bay, a high-speed track which mastering can prove challenging for even experienced drivers.

Bob Pierce believes his son has what it takes to be fast at East Bay. That was especially evident in Monday night’s race, when the third-running Bobby Pierce was shuffled outside the top five on a mid-race restart but recovered by switching to the high groove and racing his way back to fifth.

“To be fast here, yeah, you’ve gotta get up top and be up on the wheel, but you’ve got to be under control, too,” Bob Pierce said. “That’s one thing about Bobby. He’s more of a bottom feeder, but when he has to, like tonight, he’ll get up there and make it work around the top.”

Adapting to East Bay and its hammer-down surface can be daunting, as Reddick learned when he made his Winternationals debut in 2009.

“The first year I came here it was pretty intimidating,” said Reddick, whose only Lucas Oil Series victory came during East Bay’s 2011 Winternationals. “It’s the only other place that’s ever had that effect on me other than Eldora. After a couple races that went away, but it’s still a pretty fast place.

Of course, learning how to be fast at East Bay takes time. But that time can be greatly reduced with the added luxury of a veteran driver to provide advice. Pierce and Moran both have the assistance of their Hall-of-Fame fathers, while Reddick’s learning curve has been greatly reduced by help from Hall-of-Fame racer and chassis builder Scott Bloomquist.

“These young guys have got good people to help them,” Donnie Moran said. “With what Bob’s done and what he knows he can help Bobby, or when I go racing with Devin, that’s a big help for those guys. It helps when you have somebody who already has that knowledge to help those kids along.”

Helping the young drivers can be counterproductive for someone like Moran, who still has race against them. But even if it means getting outran by a young driver such as his son, Moran feels their success is great for the future of the sport.

“Us old guys aren’t gonna be racing forever,” Moran said. “We’re gonna be done, maybe not tomorrow but eventually. If we’re gonna keep this sport going, us guys that our doing this, we’ve got to make sure those kids can run good like we saw tonight.”