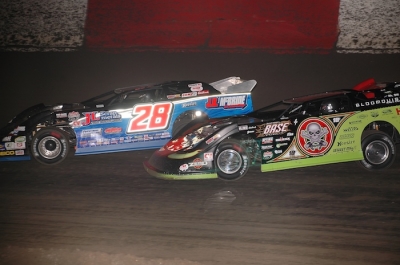 The 41-year-old Carpentersville, Ill., driver, last year’s miniseries champion at East Bay as well as across the state at Volusia Speedway Park, led all 25 laps for a $5,000 payday in the first of six nights of racing at the third-mile oval. | Complete Speedweeks coverage

“We worked on a lot of stuff over the winter," Erb said after winning his first start of 2013. "Hopefully we can find something here that’s going to work here and we can be consistent all week long.”

The fast-qualifying Erb started outside the front row and kept polesitter Scott Bloomquist of Mooresburg, Tenn., at bay all the way, including Bloomquist's charge on a mid-race restart and as the frontrunners headed for the checkered flag. Erb, who took the checkers just a car length ahead of Bloomquist, captured his third career victory at East Bay.

"We got it going there at the end," said Bloomquist, adding that his tires performed better as the race wore on. "I just needed four or five more laps. But the car's good. I think we're set for the week."

Don O’Neal of Martinsville, Ind., was third while Donnie Moran of Dresden, Ohio, rallied from his 12th starting spot to finish fourth, taking two spots in the final four laps. Bobby Pierce of Oakwood, Ill., ran third through the first half of the race and rounded out the top five. Austin Hubbard of Seaford, Del., ran as high as fourth but slipped high exiting turn two with five laps remaining and ended up seventh.

The feature was slowed by a six cautions, first when tail-starting Chad Hollenbeck spun in turn four as the first lap was completed and then when Vic Coffey lost control in turn three on the ensuing restart.

Justin Rattliff slowed on the 14th lap to draw the third yellow and there was a scramble on the restart involving Dan Stone and Stormy Scott, who was making his first Late Model start. The fifth yellow appeared for Mark Whitener’s turn-one spin on lap 18.

The last caution came out on lap 21 when Steve Francis spun in turn four, triggering a scramble that also included Eric Jacobsen and John Blankenship.

Notes: Erb's Bloomquist Race Car is powered by a Kuntz & Co. powerplant and sponsored by McBride Mack, JL Scrap Metals, Petersen Aluminum and Performance Rod & Custom. ... Erb showed his appreciation for crew chief Heather Lyne in victory lane. "I've just gotta thank her for all the hard work she puts in," he said. ... All three of Erb's career Lucas Oil victories came at East Bay. ... His previous victories came in 2009 and '12. ... Doug Blashe didn’t make it to the track for the initial start and tagged the tail of the field after the second-lap caution. ... The checkers fell about 9:20 p.m.

The 10-minute call is coming up soon, and the main event should be on the track before 9 p.m. ... Starting from the outside of the front row, Dennis Erb Jr. would normally feel that he had the preferred spot for the start of the race. But that might not be the case tonight with a tricky spot in the track surface. "Usually the top's where you wanna be," Erb said. "But where that hole's at, it's gonna make it tricky. I think there's room down there to miss it, but we'll see." ... Ronny Lee Hollingsworth is happy with his East Bay debut so far. "We've come down here and unloaded and been in the hunt," said Hollingsworth, who finished a close second to Scott Bloomquist in the first heat race. "We were fast enough to win that heat. If we got (Bloomquist) on the start, we win that heat and I'm starting on pole. I think that's pretty good for our first race."

Brad Malcuit, making his first appearance at East Bay since 1979, earned a spot in the main event for winning the PRC Strawberry Dash.

Chad Hollenbeck (not Owens, was originally reported) will take the provisional for the fastest qualifier who failed to transfer through prelims; the final starter will come from the winner of the PRC Strawberry Dash. ... After expressing concerns with dry track conditions during Sunday's practice session, it appears most drivers are pleased with tonight's track surface for the most part. The only concerns raised after heat races was a rough spot developing at the entrance of turn one. "I have to say they've done a pretty job with it compared to last night," said heat two winner Don O'Neal. "There's a little wavy spot in one, but you've gotta have an obstacle or two." Heat one winner Scott Bloomquist also noticed turn one's tricky entrance. "It'll upset the car if you hit it just right, but there's room to either go above or under it." ... Austin Hubbard's heat race spin that initiated a pileup was caused was due to his foot slipping off the brake pedal when he entered the turn. Hubbard said he spun the car intentionally rather than "plowing through" the car in front of him." ... Bobby Pierce wasn't surprised by his heat race victory, and he's looking forward to going up against three East Bay veterans in the main event. "I knew after the way we ran in practice last night that we were fast enough to run with these guys," said Pierce, who's making his second Winternationals appearance. "Bloomquist, O'Neal, Erb — they're all really good here, but I've finished ahead of all of them at some time or another. Hopefully I can do it again." ... Dwight Falcon scratched for the evening after experiencing fuel system issues in time trials.

Jared Landers outdueled fellow front-row starter Devin Moran in an entertaining 10-lap consolation, edging away on the final lap for a victory over the youngster. John Blankenship held on behind them in third while Dan Stone got the final transfer spot. A lap-two yellow waved when Nick Davis spun in turn two, collecting Scott Phillips.

Bobby Pierce slid under polesitter Eric Jacobsen in turn two on the seventh lap and grabbed a victory in the final heat. Pierce stalked Jacobsen throughout and capitalized on the leader's error to get by. Donnie Moran couldn't quite follow Pierce but finished third in the caution-free prelim while Steve Francis got the fourth and final transfer spot.

Fast qualifier Dennis Erb Jr. raced to victory a race that took forever to get started. Austin Hubbard, part of two of the failed starts, survived to finish second while fellow second-row starter Eddie Carrier Jr. was third. Mark Whitener, also involved in one of the bad starts, came from his eighth starting spot to finish fourth and earn his first Super Late Model Speedweeks start at East Bay. The race required four starts to get rolling, and another yellow flew after just one lap was down on the fifth start (when cars were single-filed). Outside front-row starter Chad Hollenbeck spun in turn one on the initial start, but got his spot back when the race was restarted. The next start was spoiled, too, by a turn-three scramble when Hubbard spun, involving Doug Drown (who pitted) and Whitener. The third start saw Hubbard spin in turn two, while others went around behind him. Hollenbeck lost control at the end of the backstretch on the fourth start, but one lap was scored and he had to start on the back.

Polesitter Don O'Neal cruised to an easy eight-lap victory in the second heat. Fellow front-row starter David Breazeale recovered from a poor start to finish second ahead of Vic Coffey while Todd Frank got the fourth and final transfer spot to earn his first career Super Late Model Speedweeks start. The prelim's lone caution waved on the first lap when Billy Moyer Jr. spun in turn three with a flat left-rear tire.

Polesitter Scott Bloomquist got the jump on fellow front-row starter Ronny Lee Hollingsworth and led all eight laps for a victory in the first Lucas Oil Series heat of the season. Hollingsworth hunt with Bloomquist but never made a serious bid for the spot. He instead spent most of his time holding off Tyler Reddick, who was third. Justin Rattliff was fourth to get the final transfer spot. Doug Blashe didn’t show up for the first heat and will tag the second heat. Jimmy Owens, scheduled to start third, had to start on the tail because he wasn't using the four tires he'd qualified on. He ended up taking four laps to shake the car down and plans to run his consolation race.

Erb, a winner last year at East Bay, turned a 14.173-second lap at the third mile oval in the first round of 37th annual Dart Winternationals preceding $5,000-to-win main event.

Besides Erb, other heat polesitters will be Scott Bloomquist of Mooresburg, Tenn.; Don O’Neal of Martinsville, Ind.; and Eric Jacobsen of Santa Cruz, Calif.

Tyler Reddick got a single time-trial lap after slapping the turn-one wall in hot laps, turning a solid lap that was third quick in his group. ... Billy Moyer, the all-time winningest driver in Winternationals history at East Bay, is sitting out the night’s action. ... The only other car in the pits not entered is the No. 10 of Leon Henderson, who isn’t expected until Thursday; Henderson’s teammate David Breazeale is entered. ... No Lucas Oil Series points will be tallied the first four nights; Friday and Saturday are the week’s only points races. ... Modified standout Stormy Scott of Las Cruces, N.M., is set to make his Late Model debut in tonight’s event. Scott, 23, is confident he’s going to have a short learning curve in full-fendered competition after posting competitive lap times during Sunday’s practice while making his first-ever Late Model laps in his Bryan Rowling-owned Bloomquist Race Car. “I’m excited because I think we’ll be pretty good tonight,” said Scott, whose considering chasing the Lucas Oil Rookie of the Year Award depending on how he performs this week at East Bay and next week at Volusia. “But I think we’ll be even faster each night as I keep getting more and more seat time.” ... Jerry Lierlyof Camp Point, Ill., is making his Speedweeks and East Bay debuts tonight in a car the Scott Bloomquist drove much of last season. Lierly, who drove Bloomquist Race Cars during his rookie Super Late Model season in 2012, was happy with the car during Sunday’s hot laps. Lierly, who raced mostly in the Midwest last season, hopes to travel more broadly this season including many Lucas Oil events. ... Tyler Reddick of Corning, Calif., is embarking on a busy Speedweeks. He not only plans to complete at East Bay and Volusia, but will also race in the NASCAR K&N Pro Series event Feb. 19 at Daytona International Speedway. Reddick is locked into the Daytona event thanks to his K&N Series victory at Rockingham Speedway in November. ... Ricky Weiss of Winnipeg, Manitoba, acquired a pair of Bloomquist Race Cars from Dan Schlieper over the offseason and plans to debut one of the cars in tonight’s event. Weiss, a former WISSOTA national champion, plans to compete in more open motor events this season. ... Dwight Falcon of Walker, La., is going retro this week with an ’04 Rayburn Race Car. While it may be an older car, Falcon said he has worked with chassis builder C.J. Rayburn on some new setup developments for the car, which Falcon only ran a few times during the 2005 season when it was new. Falcon’s only other East Bay appearance was in a Rayburn car during the 2000 Winternationals. ... Former Lucas Oil Rookie of the Year Justin Rattliff is also entered in a Rayburn after driving Bloomquist cars in recent seasons.